The Haunting of Sprague Mansion

Located in the town of Cranston, Rhode Island, in the United States, is the stately manor known as Sprague Mansion. Named after Governor William Sprague, the house was built in 1790, originally intended to be used for farming, but went on to become a grist and then a cotton mill, becoming the Sprague Print Works textile mill in 1808. The house would be owned by four generations of the Sprague family, including among them two governors who later became U.S. senators, constantly expanding until it was a sprawling, 28-room estate complete with a ballroom, carriage house, and expansive gardens. It is quite a beautiful piece of property, but it also has a dark history, and is a wellspring of tales of hauntings and supernatural terror.

The estate knew its share of tragedy during its time with the Sprague family, mostly during the time it was owned by Amasa Sprague, son of William Sprague, who inherited the mansion in 1836 after his father died of an infection caused after a chicken bone that had become lodged in his throat one day at breakfast. Amasa was a textile tycoon and one of the richest men in America in Civil War times, so it was something of a shock when on New Year’s Day of 1843 he turned up dead on a street near the mansion, his body badly beaten and bruised, and with a dog bite and gunshot wound to the arm. At the time it was thought that he had been killed by an Irish immigrant by the name of Nicholas Gordon, who owned a small pub nearby and had motive in that Amasa had had his liquor license revoked because of too many textile mill workers getting drunk there constantly. There was no evidence at all that Gordon was behind it, but authorities really pushed for his conviction, which they got, and after that Gordon was found guilty and hanged. In later years it was suspected that his brother, William Sprague II was the actual killer, but this was never pursued, largely due to his untouchable social standing and wealth, and he died of typhoid in 1850 without ever being charged.

After all of this there would be further tragedy and suffering orbiting the mansion. Amasa’s son, William Sprague IV, moved into the mansion with his wife, Kate Chase, who was the daughter of Secretary of the Treasury and later Chief Justice of the Supreme Court Salmon P. Chase, and they did not have a good time of things while there. Their son, William "Willie" Sprague V, committed suicide at the mansion in 1890 at the age of 25, leaving behind a venomous note that blamed his father. Kate, who was at the time considered to be the ultimate trophy bride, stunningly beautiful and from a rich family, would end up messily divorcing her husband to become a recluse, squandering her fortune, losing her looks, and dying penniless and destitute in 1899. William Sprague IV would later die of complications from meningitis on September 11, 1915. William II’s son, Byron Sprague, took over the family business but the mill fell on hard times, and in the meantime his own daughter, Mary, died at the age of 10. It was almost as if the whole family was cursed.

Whether they were really cursed or not, the house would in later years go on to be considered to be one of the most haunted places in the country. The stories of hauntings at the mansion began after the mansion was sold to Cranston Print Works in the early 1900s, when residents and servants at the house frequently saw the spectral figure of a man on the main winding staircase. This ghost would in later years come to be known as “Charlie the Butler,” and was seen all of the time, sometimes even talking to amazed onlookers. Other paranormal apparitions reported were that of a woman in a fancy evening gown in the ballroom, an entity that dwelled in the wine cellar that would brush against people, as well as shadowy figures seen in the mansion’s many mirrors. Other miscellaneous paranormal activity reported around the mansion were moving objects, cold spots, bedding pulled off of beds, often while people were sleeping in them, the sounds of disembodied footsteps and other anomalous noises, and flickering lights, among others. 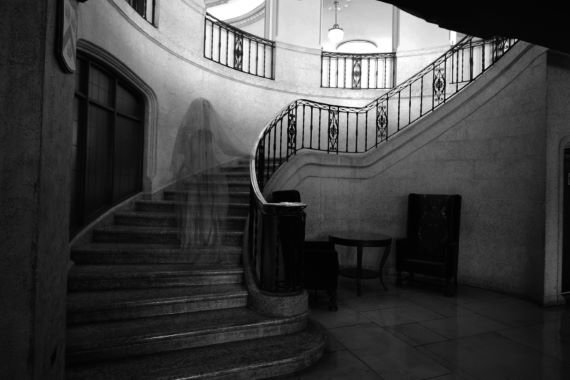 When the mansion eventually passed into the possession of the Cranston Historical Society, the hauntings continued unabated, and in 1968 there was a séance conducted here by the caretakers that had some weird results. They would allegedly make contact with Charlie the Butler, who explained to them that he was upset because his daughter had never been able to marry one of the Spragues, and would only be at peace when someone told his story. Charlie would go on to become the most famous ghostly resident of the house, and the Cranston Historical Society even has a yearly fundraising event called “Annual Charlie the Ghost Party.” The Historical Society has also noted that there was once a room in the small house full of creepy looking dolls called the “Doll Room,” which was also said to be intensely haunted, and that the wine cellar continues to be a hotspot for all manner of ghostly activity.

Considering all of these paranormal phenomena, the Sprague Mansion has become a prime destination for ghost hunters and has been featured on paranormal programs such as the SyFy channel’s show Ghost Hunters. The ideas on just who or what are haunting it have run the range. Any one of the dead Spragues, as well as the butler or even some demon have been considered, and it really makes us ask just why this particular place should be so intensely haunted. Whatever the answers may be, the Sprague Mansion surely earns itself a place in the pantheon of great haunted places, and continues to awe and frighten right up to the present.

Mysterious JetPack Pilot is Back! Or Not?