The Mysterious Demon’s Road of Texas

Meandering out through a dusty, lonely rural area outside of Huntsville, Texas, is a weed choked, pothole riddle stretch of dirt road that most people wouldn’t think much of at first glance. It is such a narrow little unassuming slash of decrepit road that it doesn’t even show up on some maps, and most people could drive right on by it without giving it any thought at all. It is officially known as Bowden road, but if any of the many tales of the paranormal that surround it are true, then it has more than earned its more common local name of “Demon's Road.” Even without tales of ghosts and other strangeness, Demon's Road is undeniably a creepy and spooky place. Besides its brush tangled, forlorn façade and its remote location that makes it impossible not to pray one doesn’t break down there, it also wanders through an old cemetery from the 1800s known as Martha’s Chapel Cemetery, which is full of crooked trees, eerie old weathered gravestones, and is itself considered to be one of the most haunted places in Texas. Let's take a trip down this lonely stretch of road, and delve into some of its frightening mysteries.

One of the creepiest stories from Demon’s Road is that of a spectral little boy who supposedly roams about here. Described as a young boy of only 6 or 7, he is said to have glowing eyes and to ride along the dirt road on a red, old-fashioned tricycle that can often be heard squeaking and clanking along even before the witness actually sees it. Despite his rather malevolent appearance with his gleaming eyes, the boy is apparently not known to be particularly evil or aggressive if your heart is in the right place. In fact, most witnesses seem to say that the wraith will usually either vanish into thin air or conjure up a bank of thick fog to conceal himself when seen or confronted, but if you have committed a violent crime in your past or are of bad character he will either attack you or torment you in your dreams. Even in the best case scenario, a little glowing-eyed freaky kid on a squeaky old-timey tricycle would be enough to scare the daylights out of quite a few people driving through. Another phenomenon reported from along the road is that of tiny handprints appearing out of nowhere on the windshield, although whether this is connected to the tricycle boy is anyone’s guess. Who is this boy supposed to be and why is he there? Who knows?

Other spirits and demons along the road don’t seem to be as nice, and there have been people who have reported being actively chased by shadow people or orbs of menacing red light. These red lights are often said to appear in the same number as there are occupants of the vehicle, and get brighter the more scared one is. One commonly reported frightening occurrence is that of people having their car’s rocked by unseen hands, or even being slammed with some invisible force that leaves actual dings and dents behind, as well as tires that get punctured for no discernible reason. Perhaps even more terrifying is a demonic beast occasionally encountered here, which appears as a tall, pale humanoid with reptilian skin and no face except for a wide mouth full of needle-like fangs. It apparently likes to jump out in front of passing cars, and has been blamed for more than one accident on the road. It is supposed to be almost unbearable to look at, inciting a profound, primal fear that allegedly makes some people go mad, and which one resident who saw it rather colorfully describes as “like glimpsing the fires of creation, the pit of hell, and a vast dimension where the laws of physics are used by elder gods as toilet paper.” It is not only this pale demon, that seems to lurk along the side of the road, and it appears that driving down Demon’s Road one is liable to have any number of ghosts and monsters jump out in front of them, including hooded dwarfs, black demon dogs, and others. One witness named Robert Rhodes has said of his own encounter:

It's not bull me and my friends went down there we did not see anything when we first went but we videotaped the experience when we went back over the videotape a red figure ran out in front of my car right before we entered the cemetery oh and it's not faceless like some people say it has yellow eye's it looked right at us as it ran across the road in front of my car!!!

If ghost boys, malicious phantoms, and pale eldritch horrors aren’t enough for you, still other reports tell of picking up spirit attachments along the road or in the cemetery, with the ghosts subsequently appearing to follow them home and haunt them. One pretty bizarre tale comes from the site Texasescapades, from a woman who claims that she had been visiting the cemetery with her husband when she saw a man who seemed to be just sort of wandering about. At the time she thought it was eerie but didn’t think too much of it. In fact, she had almost forgotten all about it when she was getting into the shower a few days later and saw the same man looming in the shadows. Just as she was about to scream he allegedly just vanished into thin air like he was never there at all. In another report from Reddit, a poster explained that after going through Demon’s Road she was visited in the night by a shadow figure that lurked about her house and even tried to strangle her one night before vanishing to leave her breathless and very afraid. 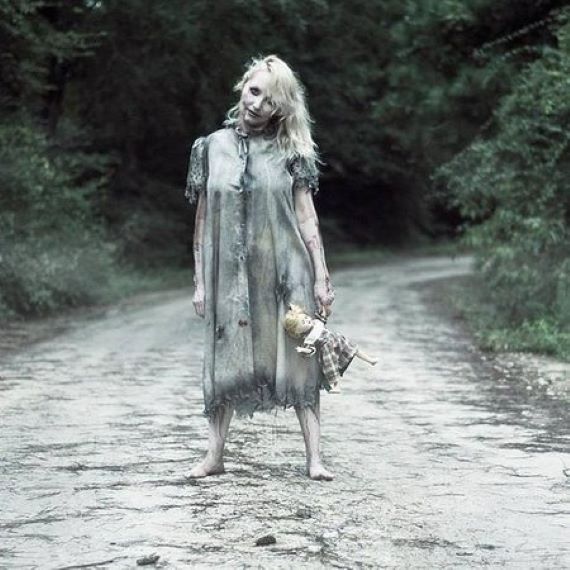 Of course there are also the requisite tales of Satanic cults operating in the area carrying out strange rituals and sacrifices, and it sure is a lot of bizarreness for such a nondescript little dirt road. One of the strangest things is that it doesn't even seem that there has ever been any sort of major tragedy or bloodshed in the area as far as anyone knows, making it all the more baffling that it should be so intensely permeated by this weirdness. Is there some secret history we don't know about it? Or maybe there is something about the land itself? Does it lie on some sort of energy vortex or spiritual nexus, as some have suggested? Is the land just sour somehow? Or maybe it is just some eerie urban legends that have sprouted up around an undeniably creepy little road? Next time you are in the area of Huntsville, it might be worth checking out for yourself. You never know what you might find.

The Slenderman: “It Became a Meme”