The Mysterious Haunted Homestead of Australia

Located on a hillside overlooking the town of Junee, New South Wales, Australia is a quaint, historic double-story late-Victorian-style manor called the Monte Cristo Homestead. In modern times operating as a museum, bed and breakfast, and antiques exhibition and showcase, the house has a long and often tragic history. Yet besides the people who come here to look at antiques and enjoy the rustic, historic setting, the Monte Cristo Homestead is also the destination for droves of ghost hunters and paranormal investigators, as this charming little spot is also known as one of the most haunted places in Australia.

The Monte Cristo Homestead was first constructed in 1885, by a local pioneer by the name of Christopher William Crawley, who passed away in 1910 to leave it all to his wife, Elizabeth Crawley. By that time the house had already gotten a taste of tragedy and death, as one of the Crawley children died at the age of 18 months after falling down the stairs, or by some accounts being pushed, as well as a maid who was killed when she fell from an upper balcony, and a stable boy who died in a fire. It seems that the death of her husband finally caused Elizabeth to snap, as in a sad turn of events, she purportedly sort of lost her mind out there by herself, becoming a well-known recluse and eccentric weirdo in the area. She supposedly spent most of her time locked away in a creepy chapel she built within the manor, and according to the lore only left the house a total of two times up to her death in 1948 at the age of 92. After that the house fell into disrepair, crumbling away and becoming a feral, weed-choked place that drew in squatters and vandals who stripped it clean of anything of value. During its long abandonment, many spooky stories grew up around the homestead just as the weeds did in its unkempt grounds. It is said that a caretaker was murdered there in 1961, and that some twisted individuals kept a mentally disabled man chained up within its walls.

When a couple named Reg and Olive Ryan purchased the manor in 1963, Monte Cristo Homestead was a pale, faint shadow of what it had once been, the forgotten place in ruins and in need of massive renovations and repairs. It was as they were doing this that strange things would begin to happen. It seems to have started when the family would return home one evening to find lights on in the house, quite strange since at the time there was no electricity installed yet. The lights would go out as they approached, yet it would seem as if no one had been there at all, and no intruders would be found. They began to think that some of the squatters known to have lurked on the property had perhaps returned, or that there were burglars prowling about the residence, but no sign of a break-in or evidence of this could ever be found. Nothing was stolen or moved, it was just those lights. From there things would become steadily more intense, and it would graduate from the odd and unsettling into the truly frightening.

The family began to hear strange sounds around the house, most prominently what sounded like someone in high-heeled shoes walking around through the halls or on the upstairs balcony, which seemed impossible at the time, as it was still being renovated and was full of holes and very unstable. Even when they did get electricity put in, the lights began turning on or off by themselves at all hours. They thought there was maybe a problem with the electrical wiring, but an examination showed that it was all in perfect working order. Both them and their children would also feel intense cold spots that would pass through even on the warmest of evenings, and there were many instances of moving objects and of paintings or framed pictures falling from their hooks. More frightening still were instances when they would feel unseen hands poke or prod at them, or even rest upon their shoulders, which then led into actual apparitions being seen. The most commonly seen of these was a shadowy woman in a blood-soaked dress who would briefly at the top floor balcony appear only to vanish, likely the ghost of the maid who died there, but there were others as well. One of these terrifying incidents was told by the family’s son, Lawrence, who would say of it in an interview with The Canberra Times:

My parents were hosting a party in the ball room and as I was only little, one of my sisters took me up to bed. Every hour one of them would pop their head in to check on me. My youngest sister who was 12 at the time entered my room to see a bearded man sitting on the end of my bed staring at me, he then turned to give her a menacing stare. She screamed and ran to the party to tell my parents that there was a weird man in my room, but when they got there he was gone and I was still sound asleep. They searched the house and found nothing or no one. She described him as wearing old-fashioned clothes and they thought it was possibly Mr. Crawley who has been seen in the property a number of times since. When she finally told me that story when I was 13 years old, it all made sense. I hated that room and had always felt like I was being watched. I never slept in the main house ever again and I still won’t. 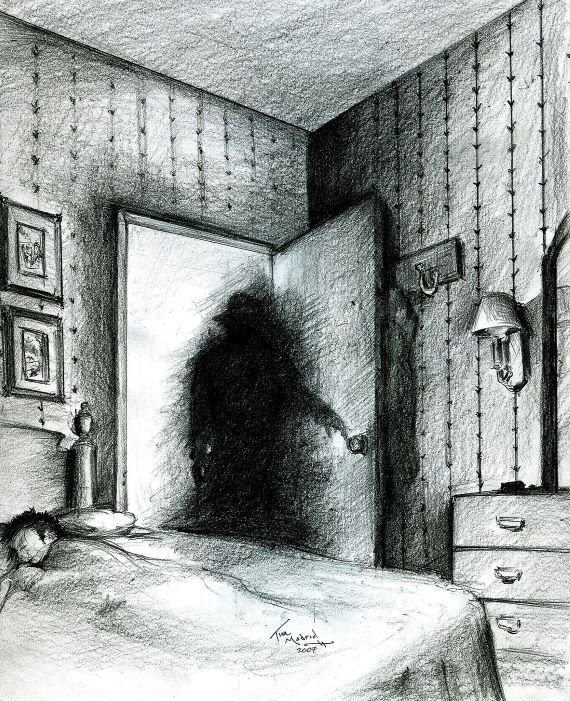 Other ghosts said to haunt the manor are those of Mrs. Crawley, the servant boy who died in the fire, the Crawley child who died on the stairs, and that of the mentally ill man who had been chained up here, who announces his presence with the clanking of chains. All of this has persisted right up into the modern day, with other miscellaneous phenomena experienced being the sounds of disembodied shouts and screams, orbs of light that appear and disappear, and sudden feelings of despondency and sadness that hit both the family and visitors like a physical blow, with Lawrence saying of this, “Many visitors to our house cannot go into the front room due to a sense of overwhelming sadness and fear. I’ve seen grown men come out sobbing.” There are also those who complain of sudden, inexplicable bouts of dizziness, nausea, or difficulty breathing. Visitors who opt to spend the night at the manor have reported having something play with their feet as they sleep, or of waking to find a sensation like a heavy weight on their chest. All of this has ensured that the Monte Cristo Homestead has become a sort of mecca for macabre curiosity seekers and paranormal investigators alike, and it has appeared in paranormal TV programs such as Scream Test, Ghost Hunters International, and My Ghost Story. The Ryans, who still own the homestead, hold regular ghost tours during which it seems most people don’t go away disappointed, and they even leave the lights on out on the porch because some people will run outside in a panic. Lawrence Ryan has said of his ghost tour operation:

I love showing people from all over Australia around our home and letting them decide for themselves whether or not they believe. While many people come away feeling unsettled, many others just have a great time. Either way, Monte Cristo is a beautiful historical building that my parents worked very hard to bring back to life. I am still incredibly proud and thankful to be able to call it my home, however spooky it may be.

The Monte Cristo Homestead has gone on to be known as one of the most haunted places in Australia, and has drawn wide interest from the paranormal world. What is it about this place that draws these forces to it? Is it the dark history tainted with death, the anguish, or something about the very land itself? There is no knowing the answers to these questions, but if you fancy checking it out for yourself, you can still book a room there, if you dare.

An Ancient Crater With a Mysterious Past and Present