It is amazing the sheer variety of places and things that can supposedly be haunted. Haunted houses, hospitals, hotels, skyscrapers, abandoned places, tunnels, beaches, mountains, caves, forests, as well as haunted cars, paintings, dolls, jewelry, even wedding dresses, it seems like there is no end to what ghosts can attach themselves to. One type of place that seems to not really fit in with what one might consider to be a traditionally haunted place would be a state fair. After all, these are places for family fun and good times, where everyone is walking around enjoying the many attractions and their minds are likely not anywhere near thinking about ghosts and paranormal weirdness. Yet, in the state of Minnesota there is a major state fair, one of the largest there is, which has somehow managed to draw to itself numerous tales of ghosts and hauntings among all of the joy and revelry.

The Minnesota State Fair, in the U.S. state of Minnesota, is the largest state fair in the United States by average daily attendance and the second-largest state fair in the country by total attendance. Also known as “The Great Minnesota Get-Together,” the fair is held every year over twelve days from late August to Labor Day in early September at the state fairgrounds, the Ramsey County Poor Farm in Falcon Heights, Minnesota, just a stone’s throw away from the Saint Paul campus of the University of Minnesota. The fair covers 322 acres and draws in droves of people, with the total attendance in 2018 reaching 2,046,533, and hitting at one point 270,426 in a single day. In other words, it is a major event in the state, often voted as one of the best state fairs in the United States, and people come here from far and wide to enjoy various exhibitions, livestock shows, countless food and drink stalls, and various other events, including a butter sculpting contest.

The first state fair held at the current location was started on September 7, 1885, with the site chosen for its convenient, easily accessible location between Minneapolis and St. Paul. There is plenty of history here, with many very old structures and the oldest still operational ride, one called Ye Old Mill, dating back to 1915. It is also famous as being the location where in 1901 then vice president Theodore Roosevelt uttered his famous quote “Speak softly and carry a big stick” during an appearance there. It all sounds like a good day out, but what many of the throngs of happy, frolicking visitors might not realize is that there is also a dark history lurking here, as well as phantoms and ghosts.

The place that has the most tragedy associated with it is the State Fair Grandstand, where various high speed races and daredevil shows are performed. Here race car drivers and stuntmen do death-defying acts to the awe and amusement of the crowds, only sometimes these performers have not managed to defy death after all. There have apparently been at least eight such performers who have been killed performing their stunts right in front of packed crowds, including the famous stunt woman Kitty Middleton, known for “wing walking,” that is walking out onto a moving airplanes wing, who died here in 1951 after the plane plummeted and crashed not far from the grandstand. It is perhaps this grim history of death that has managed to make it one of the most haunted places at the fairgrounds, with numerous reports of seeing phantom daredevils lurking about on the roof or sitting in the stands, only to vanish into thin air. One ghost in particular is that of a blonde man who likes to hang out near a small building behind the grandstand stage called “The Bunker,” and it is thought that it is the spirit of one of the stuntmen who died here, perhaps still getting ready for his show even in death.

Another haunted area of the park is its oldest ride, Ye Old Mill, which would be creepy enough even without stories of hauntings. Customers are sat in a small boat that winds its way along a waterway through dark tunnels occasionally broken by illuminated fairy tale scenes sometimes featuring animatronics, all as children’s music plays in the background. It is in a way very similar to the “It’s a Small World” ride at Disneyland, and every bit as eerie, but even more so when you consider that it is supposedly haunted. The resident ghost here is said to be that of a maintenance worker by the name of Wayne Murray, who worked here until his death in 1986. After his passing, people riding Ye Old Mill began to report feeling something poke or nudge them on the ride, despite no one being there, as well as the feeling of a presence sitting in the boat with them, strange cold spots even in the hot August weather, and the sound of garbled whispering or breathing from the otherwise empty seat next to them, as well as the occasional sighting of a face looming in the darkness. There is also the local rumor that every year on the same day a large brown bird flies into the tunnels but does not fly out, purported to be Murray’s ghost. 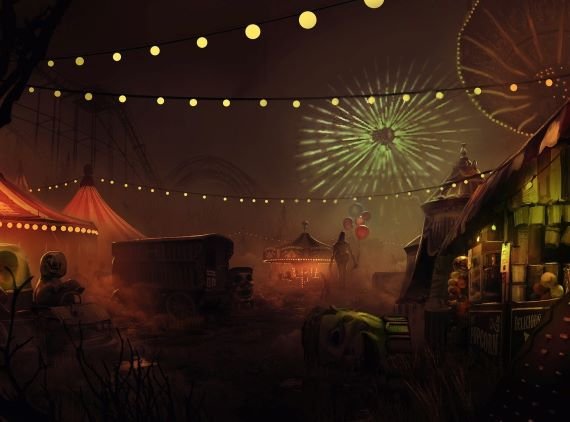 There are other miscellaneous paranormal phenomena reported from the fair as well. People will report seeing phantom scenes play out, looking almost like a film being projected onto a screen, only to vanish into thin air when approached. This could include people dancing or performing acts, usually dressed in old-fashioned period clothes and seeming to not notice their surroundings or even realize they are dead. Keri Huber, the archivist for the Minnesota State Fair, has described one such incident:

A man who has worked at the coliseum was playing some music in the cattle barn. There was nobody around, but all of a sudden he saw three people dancing, one in overalls. I think all of our ghosts anywhere at the State Fair are good folks.  I mean, they’re at the fair, you have to have fun, right?

Huber has also said that the Administration Building is haunted by the ghost of Douglas Baldwin, who was the Minnesota State Fair General Manager for decades, and who died in 1962. Besides these human ghosts, another phenomenon that seems to pop up all over the fairgrounds is that of ghostly, phantom animals. Ghostly cows, dogs, and crows have all been seen lurking about, and the most persistent one is apparently a phantom pig. Its favorite haunt appears to be the old swine barn, where it will apparently be seen wandering about or rooting around as if it is looking for something, only to blink out of existence much to the surprise of witnesses. Paranormal researcher Chad Lewis has said of the pig:

Many people have contacted me because they think they see a pig ... but when they turn, it disappears. Legend is you will not be able to take a photo of this phantom pig. It's always been my theory that the Midwest is the weirdest place in the country.

Ghost daredevils, haunted carnival rides, and phantom pigs and cows? What a weird place, indeed. Most of these stories seem to go right over the heads of most visitors, and it all seems to be pretty obscure even for locals, but there definitely seems to be something spooky lurking behind the scenes at the Minnesota State Fair. What would keep these spirits here and what do they want? Maybe the best way to find out would be to go check it out for yourself, and have fun at the fair but mind all the damn ghosts.

A Controversial Case of a UFO Contactee and Mind-Control