The Mystery of Haunted Hellingly Hospital

Some of the most haunted places and tales of ghostly phenomena just happen to be old insane asylums. It doesn't seem to be too hard to figure out why. After all, these are structures which in their day held all manner of pain, suffering, and atrocities, which combined with their typically gothic and run down appearances seem to make them prime targets for hauntings and paranormal activity. One somewhat lesser known haunted insane asylum lies in rural England, and it has all of the dark history, menacing demeanor, and tales of hauntings one would expect from such a place.

Located near the village of Hellingly, in the English county of East Sussex, Hellingly Hospital, formerly known as the East Sussex County Asylum, opened its doors to mental patients in July of 1903. It was originally built to alleviate the overcrowding at the nearby Haywards Heath Asylum, and in its time it was quite the ambitious structure, with a main complex comprising an administrative block, central stores, kitchens, a recreation hall and the assistant medical officer’s residence, which was all connected to the various wards by a spider web of gothic-looking corridors. The hospital even had its own private railway called the Hellingly Hospital Railway, as well as an electric tramway, which at the time was a rare and innovative feature of such facilities. It also had villas, an acute hospital, a ballroom, chapel, a farm, married attendants' cottages, and specially equipped isolation hospital for infectious diseases, all helping to make it completely self-sufficient, almost a small town rather than a hospital, and would in later years be one of the first mental hospitals in England to feature a medium secure unit, further making it unique for its time. In addition to all of this, Hellingly used cutting edge treatments, being one of the first such hospitals to use Lithium therapy for manic patients. However, despite all of this it was unable to escape the shadow of darkness lurking in the background.

Besides all of its apparent luxuries and cutting edge facilities, Hellingly Hospital wasted no time in gaining a reputation for its cruel treatment of patients and less than favorable living conditions. Patients were routinely punished for the most minor infractions by nurses and guards that became notorious for their cruelty and for being negligent and very often drunk on the job. While living conditions were fine at first, the hospital quickly became overcrowded, the building designed for 700 patients quickly hosting a ballooning population of nearly 1,300, which led to cramped, filthy quarters, which devolved into chaos and on several occasions contributed to deadly outbreaks of disease. This overcrowding also led to doctors giving more misdiagnoses and prescribing the wrong treatments, and during this era there were more experimental treatments being used as well, such as electroshock therapy, lobotomies, and untested new drugs. Poor security measures also ensured that escapes were unsettlingly common. With the escaped patients at times committing crimes or otherwise wreaking havoc in the surrounding areas.

In later years, advances in care and ethics made things a bit better, but it was still no walk in the park to be here. When the Hellingly Hospital closed in 1994, it was not because of the poor conditions, but rather because it was just becoming too expensive to operate. When it did close its doors, many of the patients were apparently released with fake orders, running amok and committing crimes before either eluding capture or being rounded up and moved to other facilities. After this the hospital and its grounds rapidly fell into disrepair, becoming victims to the elements, arsonists, and vandals, devolving into a state of bleak neglect. This invited urban explorers, its very haunting atmosphere and danger an irresistible lure to these adventurers, even after part of the structure was demolished in 2010 to make way for homes and a park. Oh, I almost forgot, and yes, of course it’s haunted. 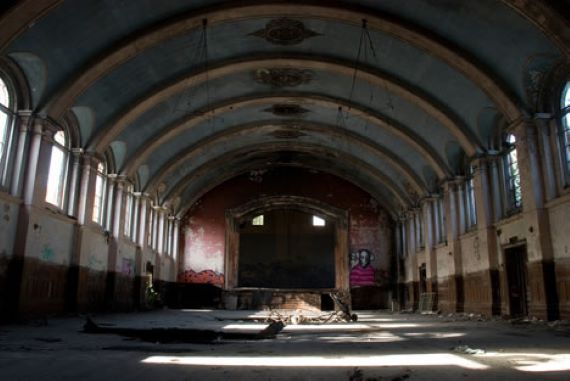 Many of the initial reports come from its days of abandonment. There are reports from this time of loud booming noises, disembodied groans and screams, and a strange mist or fog that will congeal and roam about. A lot of the paranormal phenomena here can also be seen in reports that come from the many urban explorers who picked through the rubble of what once was. Glowing eyes peering from the shadows, shadow figures, and feelings of intense dread are commonly reported, and there are also reports of scenes from the past playing out like a movie, and also some cases of lost time. Physical symptoms were also not uncommon here, such as disorientation, nausea, dizziness, and a sense of inexplicable confusion. The intense paranormal activity has continued right up to the present, making sure there have been plenty of explorers, with those who have come here to investigate that have been so upset by what they have experienced that they have run screaming from the premises, and which all has made it a magnet for ghost hunters and paranormal investigators.

Like with many other such places around the world we are left to ask ourselves what is going on here. Is this the pain and suffering of the past imprinted upon the walls of this place? does it lie on some sort of spiritual nexus point or energy line? Is this indicative of perhaps some portal between worlds? Or is it all something else? Whatever it is, the Hellingly hospital certainly looks the part, and continues to attract the curious and seekers of the mysterious.

Roswell: Pointing the Finger at the Ones Who Knew the Truth – Part 1