The Strange Mystery of the Enigmalith

Throughout history there have been mysterious artifacts that have defied understanding for years. Every once in a while a strange object will seemingly show up that challenges what we think we know, be that impossible fossils, strange devices lost to the mists of time, and others. One such mysterious discovery is what is claimed to be a modern, advanced device buried within ancient rock, which has managed to be discussed and debated to this day.

The year was 1998, and electrical engineer John. J. Williams was allegedly out hiking in the mountain wilderness somewhere in North America on an otherwise normal day. The location has never been explicitly named, but Williams has insisted that it was “far from human settlements, industrial complexes, airports, factories, and electronic or nuclear plants.” As he walked along, he noticed an oddly shaped rock jutting out of the ground, and after digging it out he could see that it was ancient granite, and embedded within it was what appeared to be a modern, 3-pin electrical plug, measuring about 8 mm in diameter; the pins of the device about 3 mm high. Curious, Williams tried to pull the plug out, but found to his astonishment that it seemed to be melded to the very rock itself, which seemed truly odd considering that the rock itself would have been absolutely ancient.

According to Williams, the rock would be found to be composed of of granite, quartz and feldspar, estimated as being at least 100,000 years old. He claims that he had the anomalous object within it examined by an engineer and geologist, who could not discern what material it was made of, and found that the apparent electrical component seemed to show no evidence of having been soldered, welded, or glued into place, and that it additionally demonstrated a weak magnetic attraction. X-ray scans of the rock would supposedly show that the device extended to an opaque internal structure within the stone, and there were also found melted blobs of a metallic-like material around the periphery of the plug. Furthermore, it was purportedly deemed that whatever the “plug” was, it seemingly impossibly existed before the very formation of the rock itself. Williams would call the mysterious device the “Enigmalith,” which is a combination of the words “enigma” and “monolith,” and so a rather strange mystery would emerge. How did this obviously artificial object get fused into strata that was tens of thousands of years old? That depends a lot on who you ask.

According to Williams himself, this is obvious evidence for an advanced ancient civilization or alternatively aliens. However, others are not so sure. There are a lot of red flags about this discovery that have been brought up, not the least of which is that Williams has always refused to divulge exactly where he found it, claiming that this is to prevent people from trouncing about ruining a site where there could be other miraculous discoveries. There is also the fact that it has never been formally studied as far as we know, despite his claims that it has been thoroughly examined by geologists and engineers. Who were these researchers and what are their credentials? Williams doesn’t say. He does say that he is perfectly willing to let others study it, but he has a laundry list of often unreasonable demands that need to be met before he allows this, such as that he be always present and that the device never leave his site, reserving the right to abort the analysis whenever he sees fit. This has put anyone off of studying it at all, which Williams has constantly lamented, saying:

I was hoping against hope that with all of this substantial coverage, a scientific exploration team would have emerged by now, or at least Hollywood and the major presses would have gotten involved so that additional huge boost in publicity would have pressured the scientific community to also get involved – hopefully before the dig site becomes much more trampled on that it already is. I have not been able to get a single New Mexico scientist or skeptic to even take a look at my rock – apparently, they are all a bunch of PC-controlled chickens – so much for science credibility in New Mexico. 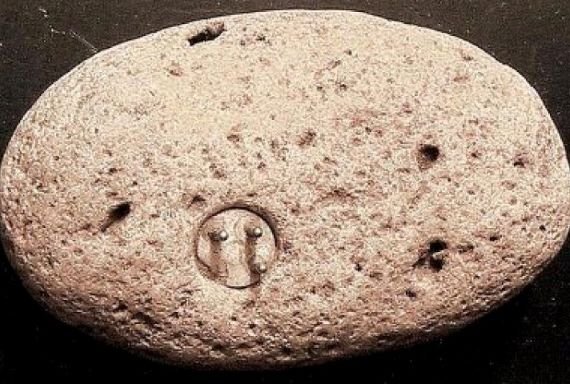 Williams has even gone so far as to offer $100 dollars cash to anyone who can prove that it is a fake, which seems to ignore the fact that the burden of proof lies with the one making the claims, not the other way around. Perhaps the biggest strike against this purported “revolutionary discovery” is that it seems that Williams is a major publicity hound and is definitely looking to make a buck off the finding. For one, he charges $19 dollars on his site just for the privilege of having access to the full CD Rom of over 150 photographs of the thing and detailed descriptions of it, and you can buy the rock itself on the site for the bargain basement fee of just $500,000. You can technically access all of the CD Rom for free, as long as you match the criteria that he describes as follows:

If you want the CDROM for free as full compensation for your efforts on my behalf, you must first justify it by proving to me: (1) That you are a member of the media or an author, and that you are doing a story that will substantially include my rock and contain my webpage address; (2) That you are a bonafide scientist, engineer or professional fortean phenomena researcher or commentator, and that you are interested in evaluating my rock, and/or putting together and/or becoming a part of a scientific team to evaluate my rock and/or to dig the site; (3) That you wish to become a benefactor and will at this time irrevocably and without any qualifications or reservations pledge and obligate at least $1,000 to a non-profit organization, trust, LLC or corporation that I expect to later set-up for the research and exploration relevant to my rock and related fortean phenomena.

There are also heavily plugged books and manuals you can buy on it all. Indeed, much of Williams’ online presence seems to be devoted to drumming up publicity for and making money from his find, which definitely raises some eyebrows. He also just happens to have a site devoted to selling books on subjects such as mind control, computer hacking, electronic security, cheating your utility provider, among others. The main skeptical idea is that this is an obvious elaborate hoax and money-making scheme, and that this electrical engineer has managed to fit an electrical component into porous rock that he claims to be solid granite. We can’t even be sure what kind of rock it is since no one has really taken a good look at it besides the scientists he claims have seen it. Regardless, the Enigmalith has become much discussed and debated on UFO and paranormal forums and websites, and it has continued to be thought of as potentially real. Whether the Enigmalith is real or not, it is a very strange story indeed, and no matter what you think it still continues to be discussed. Is is a genuine archeological oddity or something else? Who knows?

When One Mysterious Phenomenon Turns Into Two