The Strange Story of the Haunted Devil’s School

Why is it that some places turn out to be so haunted? There are countless stories, tales, and legends of haunted places, some sort of understandable, and others which leave us perplexed. One type of place that many might not immediately associate with the paranormal and ghostly activity are schools, but even such innocent places of learning can apparently fall into the realm of dark forces. Here we will look at an incredibly creepy old abandoned school in the U.S. state of Florida, which has accrued a reputation as being one of the weirdest, most haunted places in the state.

The school now referred to as simply Public School Number 4 had humble beginnings. Originally opened in 1891 in Jacksonville, Florida, it soon went under the name Riverside Park School. In later years its rickety wooden structure was completely renovated in 1918 to become Riverside Grammar School, and it went on to change to Annie Lytle Public School in 1950. The school apparently experienced a tragedy when a furnace exploded killing some students and faculty, and it was finally closed in 1960, becoming an office space for a time before being abandoned to its own devices, condemned in 1971 but not demolished, becoming a weed-choked, graffiti covered den of homeless vagrants, drug users, and derelicts, suffering a fire in 1995 that caused the old auditorium to cave in. Yet, although interesting, nothing really compares to the strangeness of the spooky and gruesome rumors that popped up about this place during its long abandonment.

One of the most popular stories that began making the rounds was that one of the janitors of the school had been a ruthless, bloodthirsty cannibal, and that there had been several mysterious disappearances of students that had been his victims, with some versions of the tale saying that the principal had been a cannibal killer as well. Students had also apparently been tortured here behind closed doors, sometimes dying during this, their bodies secretly whisked away. There were also the rumors that the school had been built upon an old Indian burial ground and that bodies had been unearthed during its construction, that the basement held an actual portal to Hell, and that mysterious Satanic cults used the ruins for their arcane rituals, making it all spookier. Such stories gained the building the sinister nickname “Devil’s School,” yet although there is no hard evidence to prove than any of this is anything other than pure urban legend, one thing that is agreed upon by many who have been there is that it is extremely haunted, gaining it another reputation as the “most haunted place in Jacksonville.”.

One of the more common reports of ghostly phenomena here is that of all of the ghosts of children running around. There are apparently often seen child-sized shadow figures or even full apparitions of kids lurking about the crumbling rooms and decaying halls, and the sound of disembodied children’s footsteps, laughter, whispering, and more spookily screaming or moaning are commonly heard. The ghost of the former cannibal janitor is said to keep them company, described as a malevolent, very aggressive entity that will attack visitors. Glowing orbs and strange flashes of light are also frequently seen here, and there is apparently a phantom tree that grows within the building, but which often vanishes or moves from place to place. There is also heard unexplained chanting coming from within the darkened building at night and sightings of robed figures prowling about. Ghost hunters who have visited have recorded all sorts of paranormal activity, including apparitions and frequent EVP (electronic voice phenomena), and this reputation for being haunted has drawn in plenty of curiosity seekers, who brave getting through the surrounding chain link barbwire topped fence and risk the unstable, crumbling structure. 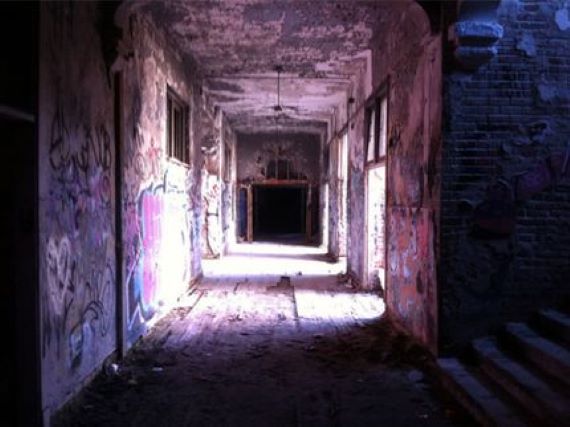 Over the years there have been some efforts to bring Public School 4 back to life, such as a bid to turn it into condominiums and another to fashion it into a nursing home, but none of these ever came to fruition. In 2000 it was designated as a historic landmark, which has kept it from being demolished, and so it still stands as an empty, feral, bleak place with graffiti covering nearly every available surface of its tattered, deteriorating structure, most of it lying in complete ruin. Whether it is haunted or not, it certainly looks the part, with the creepy legends associated it only fueling the grim atmosphere permeating it. If it isn’t haunted it certainly seems that it should be, and despite the fact that its rundown disintegrating structure, collapsing ceilings, and floors littered with holes make Public School Number 4 a bit of a death trap, and regardless of the many “No Trespassing” signs trying to keep people out, many adventurers and paranormal investigators can’t resist. One ghost hunter has said to Weird Florida about her visit there:

Our ghostbusters club went in there a few years ago and explored the old building. At the time we were there, some bums were living in there. There were a lot of devil symbols spray painted on the walls and the inside really stunk bad. It was a very large inner city school and was used for many years. It was called Gilmore School and by many other names. I know it is supposed to be haunted by the spirits are children who were killed by the principal. They say the principal went crazy and committed mass murder. I don’t know if that is true or not. Another story said it was the janitor so I don’t know. You can’t get in there now because the city has locked the place up to keep the bums out and there is a fence with padlocks all the way around the block. It is really a scary looking place especially at night. It gave us the creeps when we went inside.

Is there anything to this all, or is this just urban legends spun around an undeniably creepy place? Are any of the stories true or is this just a persistent local myth? Whatever the case may be, Public School Number 4 still stands, fenced off and cowering from the world, perhaps holding supernatural mysteries we may never understand.