The Time a Mysterious Phantom Driver Entered a NASCAR Race

One of the biggest names in the world of stock car racing is that of National Association for Stock Car Auto Racing (NASCAR). Headquartered in Daytona Beach, Florida, the massive organization is responsible for sanctioning over 1,500 races at over 100 tracks in 48 US states as well as in Canada, Mexico, and Europe every year, making it one of the most popular racing organizations in the world. Drivers at NASCAR events have gone on to become celebrities in the world of racing, and one would fully expect that these are fully seasoned professionals who have worked their way up the ranks in one of the fastest, most dangerous events there is. Yet on occasion there have been some oddities within the world of NASCAR, with one of these certainly being the time an unknown racer managed to slip into one of the organization’s biggest races, only to disappear without a trace or identity.

In 1982, NASCAR was gearing up for a major event, the Winston 500, a NASCAR Winston Cup Series race at Talledega Superspeedway, in Alabama. It was the ninth race of the Winston Cup season and there was quite the roster of big names in the sport, such as seasoned bigshot racers Terry Labonte, Darrell Waltrip, and Benny Parsons, as well as some new faces in the mix. Among these was the name L. W. Wright, who had a bit of a mysterious background in that nobody really knew who he was. He had been promoted by a man named William Dunaway, who claimed that Wright was a 33-year-old with 43 NASCAR Busch Grand National Series starts, and that he was with a team called “Music City Racing,” funded by such big musical names as country artists Merle Haggard and T. G. Sheppard. It on the surface seemed legit, and after submitting a check worth $115 to NASCAR for a competition license and a $100 dollar entry fee Wright was allowed in, despite the fact that NASCAR officials had never heard of him before and there was more than a little skepticism. However, in those days all a racer needed was to pay the entry fee, have a team and a sponsor, and provide a suitable car, all things which Wright ended up doing.

Wright went about securing mechanic licenses for all of his mechanics, then approached a man named B. W. "Bernie" Terrell, head of Nashville-based Space Age Marketing, in order to secure funding for a car and trailer. He was able to get a $30,000 loan from Terrell, the trailer he needed, and an additional $7,500 for expenses, after which he bought a Chevrolet Monte Carlo from Sterling Marlin, paying $20,000 in cash up front and the rest in the form of a check. He also wrote out numerous checks to pay for racing jackets, spare parts, tires, and fuel, with very little of this paid for in cash. Wright also procured a competitor's license and pit passes, writing the sanctioning body a check for $1,500, again not in cash. All in all Wright had managed to raise and spend about $100,000 when adjusted for 2020's inflation, which was remarkable in that nobody really knew who he was. 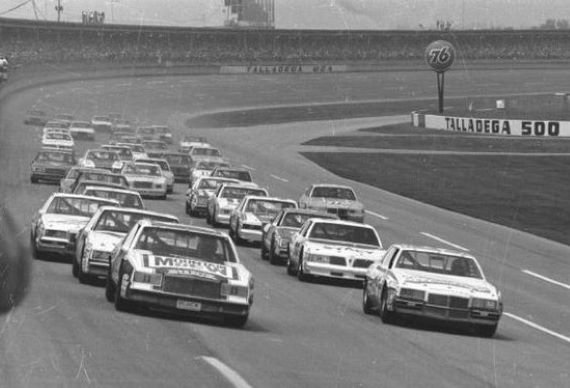 Now that his car and crew were set, Wright then drummed up publicity by appearing interviews and carrying out practice runs at the speedway, but he was by this time already raising some red flags. For one, in interviews he was very evasive on any questions pertaining to his past races and experience. There was also the fact that other drivers at the track had never seen him before, nor had commentators or officials, and his supposed sponsor, musician T.G. Sheppard, also claimed he had never heard of Wright before. In addition to this, Marlin, who had attached himself to the team out of suspicion in order to keep an eye on his investment, was stunned at Wright’s lack of knowledge on things that any experienced driver would be expected to know. Marlin would say of this, “He kept asking questions any driver should have known. He didn't seem to know much about what was going on." Wright also crashed his car in a qualifying practice run, although the damage was minor, and he just didn’t seem to be a particularly good driver at all. Who was this guy? No one knew, but he had paid his fees, had a car and a license, and so NASCAR had no choice but to let him continue on due to right-to-work laws.

When race day came, Wright entered the race, due to his qualifying performance being allowed to start in 36th Position, which is not very good at all. In the end the winner would be the favorite going in, Darrell Waltrip, with Wright coming nowhere close. However, considering his utter apparent lack of any experience and the fact that he had no discernible real races behind his belt at all, it is amazing that he was actually able to complete 13 laps, achieving a top speed of 187.379 mph before he was black flagged and ordered to leave the race for being too slow. Besides a minor bump into the wall, in such a high-speed and dangerous event, it is almost a miracle that he wasn’t killed. Wright would ultimately finish in 39th place out of 40 because another driver had already crashed, and win $1,545 in prize money, but not earn any Cup standings points. And then, L.W. Wright just vanished into thin air.

After collecting his money, Wright was just gone, leaving behind his car, equipment, and a puzzled pit crew. The speedway was searched for him to turn up nothing, he had just disappeared into thin air. After this, all of the checks he had written started bouncing, and this is when it started to dawn on everyone that they had been had, and that Terrell was likely never going to be paid back the $30,000 loan he had given Wright. Indeed, it was widely accepted that Wright had not been his real name at all, and that he had been a confidence trickster who had fooled them all. NASCAR issued warrants for his arrest, and Terrell would hire a private investigator to track him down, but “L.W. Wright” was never found, and in fact was never heard from again. We still don’t have any idea of who he was, and it has gone on to become one of the weirdest and most baffling incidents in NASCAR history. NASCAR field manager Doyle Ford would say of it all:

I've been in the business 24 years and I've never run into a case like it. Anybody can literally walk in off the street and if they have the money and equipment enter a race. But like I said, this was an unprecedented case because it's unusual for somebody as obviously unqualified as Wright was to try to get into a race. First of all there's the expense $30,000 or more just for a race car not to mention the danger. A guy who doesn't know what he's doing could easily get killed out there.

The question is why? Why would anyone do this? Why go through all of that trouble and put your life at risk for a meager $1,545 in prize money? If he was such a skilled con man, there were surely better ways to do this. Indeed, he walked away from Terrel flush with $30 large in cash, so why didn’t he just make off with that? Why blow it all on a car and trailer and crew only to leave it all behind at the race track? Was this some obsessive dream the man had had, that he was willing to pull off this con just to experience being a stock car racer? Who knows? The case has gone on to sometimes be called the “D.B. Cooper of NASCAR,” and to this day it has never been solved. Who was L.W. Wright and what did he want? We will probably never know.

Roswell: Pointing the Finger at the Ones Who Knew the Truth – Part 2