When One Mysterious Phenomenon Turns Into Two

I thought, today, I would share with you my views on a certain, very strange and controversial subject. Namely, there are two - not one - groups of Men in Black. One of the groups originated with the U.S. government. The other, however, has very different origins. So far, I have written five books on this subject (On the Trail of the Saucer Spies; The Real Men in Black; The Black Diary; Women in Black; and Men in Black). Over the years, I have come to realize just how weird this phenomenon is. Now, you will too. While there were a handful of M.I.B. cases in the late 1940s, it wasn’t until the early 1950s when the mystery really took off big-time. It was a result of the experiences of Albert Bender, whose interests included alchemy, demonology, sorcery and magic. At the time, he lived in the attic of his stepfather’s home in Bridgeport, Connecticut. When, in 1951, Bender decided to get involved in Ufology – and established the International Flying Saucer Bureau – he didn’t know what he was in for. He soon found out.

It wasn’t long, at all, before Bender was plagued by strange, shadowy M.I.B. who forced him to quit the subject. As in: or else. Bender briefly returned to the field in 1962 to promote his then-new book, Flying Saucers and the Three Men. It’s a bizarre story. It combines the occult, the Contactee phenomenon, and supernatural M.I.B. that had glowing eyes, the power to communicate by telepathy, and a strange ability to materialize and dematerialize when they felt like it. Government agents they most assuredly were not. Confusing things, however, was Gray Barker. Back in 1956, Barker wrote a book titled They Knew Too Much About Flying Saucers. It was the first book to focus extensively on the M.I.B. controversy. Significant parts of Barker’s book revolved around the Bender story. In Barker’s book, however, the M.I.B. were presented as nothing stranger than government agents. They were far removed from the world of the Men in Black that caused Bender sleepless nights and ill health. This issue of there being two types of M.I.B., is one of the most misunderstood within the UFO subject. 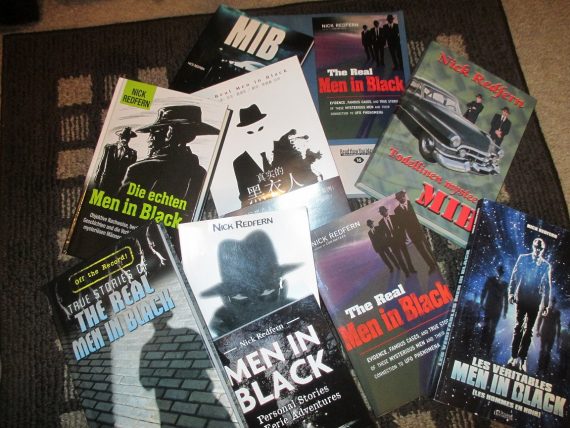 Some M.I.B. come from the worlds of government, the military, and the intelligence agencies of several countries. The FBI, at the order of J. Edgar Hoover, opened a file on Barker. The CIA’s "Robertson Panel" recommended keeping secret watch on UFO groups – in the event they had "Red" leanings – in the 1950s. Clearly, some visits to UFO witnesses and researchers were from one or more of the various "ABC" agencies of government. And those visitors were not beyond intimidating some of the early figures in Ufology. They did so by flashing ID cards and ordering those same figures to walk away from it all. Those who came calling and knocking loudly on front-doors in the post-Second World War era wore suits and fedoras – and often black. It just so happens, though, there was that other group of black-suited characters. They wore fedoras too. These are what we might justifiably call the real M.I.B..

It must be said that this second group of Men in Black were far removed from the world of government. They were pale, skinny, cadaverous figures who looked like they would have been at home in an old, 1930s-era, black-and-white horror movie – and with Bela Lugosi at the helm. To this day, they still look like that. It gets weirder. Witnesses to the M.I.B. (and to their comrades, the Women in Black) tell of feeling sick and ill in their presence: as if they are being drained of energy. “Crashing” would be a good word to use. Yes, the vampire parallels are easy to make in M.I.B. world. Those unfortunate enough to encounter the Men in Black report poltergeist activity in their homes and in the wake of the confrontations. The real M.I.B. are far less like Tommy Lee Jones and Will Smith, and far more like the menacing characters-in-black in the 1998 movie, Dark City. You want to see what the M.I.B. really look like? Check out Dark City.

It’s unclear which group of M.I.B. came first – the government ones or the much stranger ones. Most of the data, however, suggests the supernatural group were first on the scene – in the late 1940s. By the early 1950s, however, government agencies knew enough of this weirder side of Ufology. And, as a direct result, government agents “hijacked” the real M.I.B. phenomenon for their own purposes. When they needed to cover their tracks, those in the intelligence world, and/or those in the military whose job it was to intimidate people who had seen UFOs, put on the black suits and the black fedoras. They became the Men in Black. Essentially, they were playing a role that was inspired by a much stranger mystery. Documentation declassified via the terms of the U.S. Freedom of Information Act makes it clear that, in the 1950s and 1960s, the U.S. Air Force and the FBI were on the trail of the M.I.B., but had no real idea of who or what they were. This didn’t stop the world of officialdom from pretending to be the M.I.B., however, when the time and the place was deemed appropriate.

So, in conclusion, yes, the Men in Black are indeed all too real. In the early years of the Cold War, a genuine enigma of a supernatural – possibly extraterrestrial - nature was carefully, and brilliantly, mimicked by intelligence agents to ensure their identities were never known. Those same agents may actually not have had any real idea of what or who it was they were copying. Even up to today, they probably still don’t know. But, here’s the important thing in all of this: that lack of understanding what the M.I.B. are has not stopped spies, agents and experts in the fields of surveillance and intimidation from passing themselves off as M.I.B.. Meanwhile, in the background and in the shadows, the real Men in Black continue to lurk, waiting for their next target. Maybe, one day, it will be you.