When Supernatural Creatures Smile: But Not in a Friendly Way

For decades people have had disturbing encounters with supernatural humanoids that, despite looking very different, all have one thing in common: their creepy smiles. Collectively, they are known as the Grinning Man. The Hat Man is a Man in Black-type entity that appears in shadowy form; not unlike the infamous Shadow People – to whom the Hat Man is almost certainly related. On many occasions, however, the Hat Man appears in regular, human form, with a black beard and a black suit, and wearing a long overcoat or a cloak – always black, too. Most noticeable about this creepy figure is, of course, his hat. Sometimes, it’s a fedora, other times it’s an old style top hat. Occasionally, it’s more like a cowboy hat. But, regardless of the kind of headgear, it’s always present and always black. Many of the encounters occur while the victim is in a distinct altered state – that of sleeping.

Angie had just such an encounter in Leominster, Massachusetts, on September 6, 1994, as she told me late on the evening of October 8, 2014. Her reason for contacting me was due to the fact that, quite out of the blue, she had suddenly begun to dream of the events of twenty years earlier – and dream of them almost every night for a couple of weeks. Very much like those people unfortunate enough to be confronted by the somewhat similar Slenderman, Angie was sleeping when the mysterious thing disturbed her sleep by manifesting in her bedroom and staring at her with a menacing grin on its pale, ghoulish face. For a few moments, Angie was unable to move. As she finally broke the spell of paralysis, however, the Hat Man was gone. 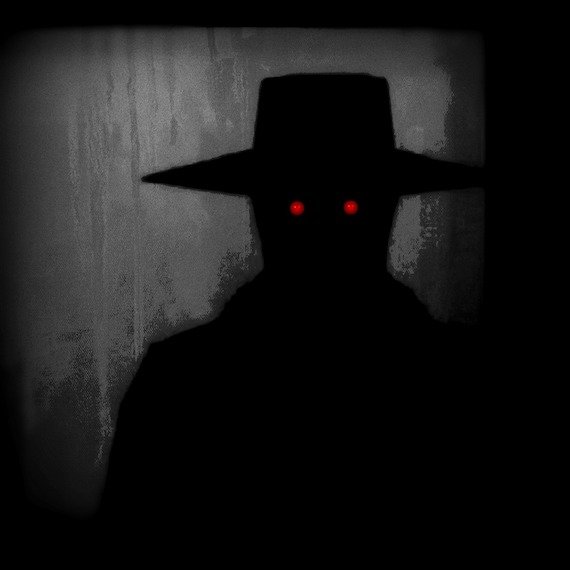 Jaye P. Paro was a woman who had a number of bizarre, UFO-themed encounters in May 1967, in upstate New York. At the time, she was a host on Babylon, New York’s WBAB station. On one particular day Jaye decided to take a walk. It was barely dawn, and the town in which she lived was still shrouded in shadows. As she walked passed a particularly dark alley, a Woman in Black loomed into view, as if from nowhere, or from some nightmarish realm. Then, out of the blue, came a black Cadillac, the absolute calling card of the MIB and the WIB. It came to a screeching halt next to the two women, and out of one of the rear doors came an unsettling-looking character. It was a man dressed in a dark grey suit, with what was described as an "oriental" appearance, and who sported a disturbing, almost maniacal, grin. The driver seemed almost identical in appearance. The man with the fearsome smile shook Jaye’s hand and said, "I am Apol." Jaye said that holding Apol’s hand was like holding the hand of a cold corpse. Moving on to yet another example...

I first became acquainted with paranormal investigator Susan Sheppard when she appeared on a 2010 DVD documentary titled Eyes of the Mothman. It’s an excellent, moody and mysterious study of the Mothman phenomenon – with the MIB getting significant coverage, too. Susan and I had a brief chat about Mothman and the MIB and she very generously offered to share with me her personal MIB-based experiences – as well as additional material on Mothman. In fact, Susan did far more than that: she prepared for me an extensive, historical account of her very own knowledge of the MIB-Mothman phenomena which hit Point Pleasant, West Virginia in the 1966-1967 period. Susan told me: 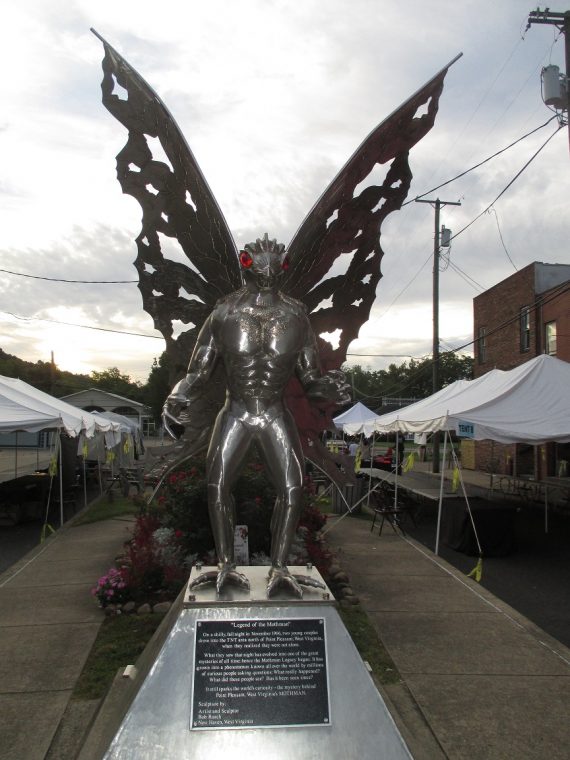 "His name was Woodrow Derenberger, but everyone called him 'Woody' It was shortly after 6:00 p.m. on an evening in November 1966, when Woody Derenberger was driving home from his job as a sewing machine salesman at J.C. Penny’s in Marietta, Ohio to his farmhouse in Mineral Wells, West Virginia. The ride home was overcast and dreary. It was misting a light rain. As Derenberger came up on the Intersection of I-77 and Route 47, he thought that a tractor trailer truck was tailgating him without its lights on, which was unnerving, so he swerved to the side of the road and much to his surprise, the truck appeared to take flight and seemed to roll across his panel truck. To his astonishment, what Derenberger thought was a truck was a charcoal-colored UFO without any lights on. It touched down and then hovered about 10 inches above the road. Much to Derenberger’s surprise a hatch opened and a man stepped out who was dressed in dark clothing and who had a 'beaming smile.' There was something about that grin, however, that sent chills down Derenberger’s back." The strange character called himself 'Ingrid Cold.' He became a key figure in John Keel's 1975 book, The Mothman Prophecies.

Paranormal researcher Mike Huberty shared the following with me: "There’s an area near Waukesha [Wisconsin], the Fox River; a river that runs through the city. When I was doing research on a series of drownings there, I found we had a bunch of unsolved deaths. They were called the smiley-faced murders [italics mine] First, it was all these young men – twenty, twenty-five years old – along the Mississippi River; they were mysteriously drowning. There were searches for them, and sometimes it was months before they were found. So, I wondered if there was anything like this on the Fox River. I found seventeen documented drownings in the Fox River. I made the connection between the drownings and the folklore of 'The Water Man.' He lives in a hidden lair in the deepest part of the rivers. He walks and talks like a normal man and has a cloak that is split in the back. But, the handkerchief that hangs out of his pocket is always dripping wet. The Water Man has hairs on its head – like tentacles – that will drag you into the water."