"What we’re particularly worried about is that this iceberg doesn’t have a very deep keel. So the amount of iceberg under the water isn’t as much as you would normally expect for an iceberg like this. (That means the berg could slide over the shelf and get) very close to the coastline. If it’s gouging out, scouring the surface, you’re devastating these populations on the seabed.”

“This iceberg” is iceberg A68a, the largest (or close to it) iceberg ever recorded, which broke off of Antarctica in 2017. The “coastline” belongs to South Georgia, a remote island in the South Atlantic that is home to possibly the world's largest colonies of king penguins (the second-largest of the species after emperor penguins). As anyone who’s every read anything about icebergs (or seen ‘Titanic’) knows, 90% of an iceberg’s mass is unseen underwater … except for A68a, according to Geraint Tarling, a biological oceanographer with the British Antarctic Survey. He’s been watching the relatively flat A68a since it broke off of Larsen C ice shelf, a task made easier – and now scarier – by using reconnaissance flights and satellite images. (Excellent images and illustrations here.) ‘Scarier’ because, after entering the so-called “iceberg alley” route where most big icebergs break up, A68a has remained in one piece and is heading straight for South Georgia, endangering millions of king penguins.

“There’s nothing that’s really been that large before in scientific history that we’ve seen coming up to South Georgia.”

Tarling’s interview with Reuters has a great comparison chart showing the 4800 sq km A68a next to countries and islands. It’s larger than Luxemburg and about the size of Jamaica, and it’s less that 50 km away from South Georgia. A collision with a normal iceberg of that size would be catastrophic, but A68a’s lack of a lower 90% makes it even worse – apocalyptic for the residents of South Georgia, who are currently near the shores because December is king penguin chick hatching season. 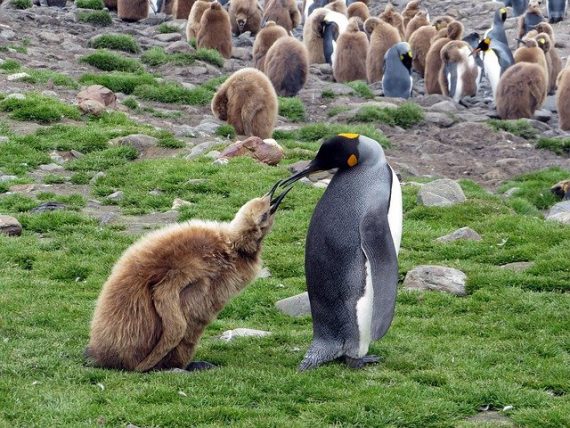 Can anything be done to save South Georgia’s king penguins from an A68a apocalypse?

"It's completely the luck of the draw."

Mark Belchier, director of fisheries and environment at the government of South Georgia and the South Sandwich Islands, tells CNN that A68a could miss South Georgia completely. Even if there’s a direct hit, it won’t wipe out all of the penguins, and they’re a resilient species that he predicts will bounce back quickly. That’s a relief for South Georgia’s penguins … but not necessarily for us humans.

“We had never seen a berg calve off as far inward as this iceberg. The Larsen C that was left afterwards was smaller by quite a bit.”

Ted Scambos, a senior research scientist at the University of Colorado in Boulder, repeated to Reuters the concerns that many environmental scientists have – climate change is causing ever-larger chunks to break off of Antarctica and those bergs will eventually melt and raise global water levels, affecting the lives of humans just as catastrophically as A68a is affecting king penguins.

Is it time for them to ask canaries if things are any better in the coal mine?

The Mysterious Haunted Homestead of Australia