A Haunted Czech Castle and its Demonic Imp

Looming over the landscape and perched atop a steep promontory above the confluence of the Vltava and Otava rivers in the Czech Republic, is the magnificent castle called Zvíkov. Originally started as a rather small structure, over the centuries it was expanded to become the massive heavily fortified behemoth it is is now, and it is often called the “King of Czech Castles.” Surrounded by a sweeping vista as it is, and often listed as among the most beautiful castles in Europe, Zvikov is renowned as being an important early-gothic structure, as well as for its soaring towers and elaborate, extensive mural decorations in the Chapel of St. Wenceslaus, a structure which itself is a masterpieces of early-gothic Czech architecture. It is a popular tourist attraction in its native land, and it also has a long, often tumultuous history, as well as supernatural tales of a demonic imp.

Although the land has been inhabited since very ancient times, the castle itself was built in the first half of the 13th century by King Přemysl Otakar I, its location was chosen for its easily defendable and difficult to reach position, and throughout the Přemyslid dynasty it was continuously expanded and fortified. In fact, for its era it was considered to be practically impenetrable, and proved its toughness in many battles throughout the ages. In 1429 the castle was held under siege for 4 months during the Hussite Wars and managed to weather the storm, earning it a reputation as an unbreakable, impregnable fortification. It would go on to be even further fortified, and passed between several different owners, most notably frequently passing between the Lords of Rozmberk and the Lords of Švamberk. It enjoyed a reputation as a very important royal palace, which reached its zenith during its time under the rule of Emperor Charles IV, during which time it was used to house the Crown Jewels.

The legendary indestructible castle would see violence again during the Thirty Years War, when in 1618 a rebellious Protestant nobleman pulled off the seemingly impossible when he successfully defended the castle against 4,000 German troops with only 140 men at his disposal. This was a tale of triumph in the face of overwhelming odds, a battle worthy of a movie, but it was also the beginning of the end for Zvikov’s glory days. In 1622, the castle was finally given up to the enemy, and was subsequently looted and sacked, suffering much damage. Indeed, the Thirty Years’ War would leave the once mighty fortress practically in ruins, and it was only used as a granary and for farming purposes. The military importance of it waned after the war, and by the 1840s it was a crumbling, abandoned husk, only managing to creep towards some shadow of its former self through heavy renovation efforts carried out by the a great German and Czech aristocratic family called the House of Schwarzenberg at great cost. Even then, these efforts faced obstacles when one of the castle’s massive gates fell down, and a large portion of the royal palace collapsed into the river below. However, by the end of the 19th century it had been somewhat brought back to life to become the jewel of Czech architecture and art that it is considered to be today.

It is unclear how its alleged hauntings fit into all of this, but it is often said to be one of the most haunted places in the Czech Republic. A very persistent tale inextricably linked to Zvíkov is that it is inhabited by a supernatural creature from Slavic folklore called a Zvíkovský Rarášek, which is a sort of nasty imp or trickster spirit. The imp has been reported here for hundreds of years, and is most active in two of the castle’s towers. One of these is the tower called Markomanka, which is notable for its mysterious and cryptic stone markings, or runes, and another is the tower called Hlíza, also called “The Black Tower,” which is enormous structure with thick walls and also happens to be the oldest preserved structure in the castle complex. The imp itself is infamous for carrying out all sorts of paranormal mischief, including pushing, poking, or tripping visitors, causing electronic equipment to malfunction or stop working, moving objects, blowing out flames, creating electromagnetic disturbances, and even appearing as a diminutive, troll-like apparition. It is said that animals brought here refuse to enter the tower and will display bizarre behavior as if possessed by the imp. An ominous tale is that the imp can cause disease and death, and that anyone who spends the night here will invariably die within the year. The imp of Zvíkov is well known in its homeland, so legendary that it has been featured in literature and art. It is unknown exactly when the imp was first reported or why it should be tethered to this place, but it is a neat little tale all the same. 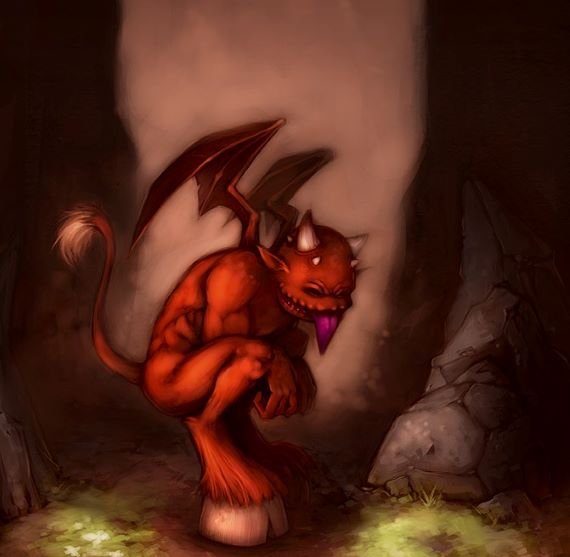 If there is a demonic little imp at Zvíkov it is not alone, as there have been reported other strange phenomena at the castle as well. There is a ghostly lady in flowing white said to roam about the premises, often appearing on stairs and see to disappear into walls or simply vanish into thin air. Even spookier are the tales of dank, secret passages beneath the castle that are prowled by demonic hounds with fiery red glowing eyes that seem to be guarding something down there in the gloom. All of this has served to make Zvíkov popular among Czech ghost hunters, but it has remained remarkably obscure to the outside world. We are left to wonder why so much of this strange phenomena should gravitate towards this place. Is it the geography of the area? Is it the bloody, turbulent history, or something else? Or is this all just spooky myths and legend permeating a place steeped in history? The answers remain unclear, but the castle is open to tours and visitors if you ever want to check it out for yourself. Tell the imp I said hi.

Taking a Look at the World of Voodoo and More