A Mysterious Wizard and the Necromancy Assassination Plot of Henry VI

History is full of strange people who have managed to occupy their own corner of the odd. Back in the 15th century, Roger Bolingbroke was considered to be a well-respected man of learning, a well-known Oxford scholar serving as a cleric, magister, and part of the household of Humphrey of Lancaster, 1st Duke of Gloucester, acting as the personal clerk to the Duke’s wife, Duchess Eleanor Cobham. In addition to this, Bolingbroke was into astrology and alchemy, even giving horoscope readings for Eleanor, and while dabbling in such things in that era was a bit dangerous, it was mostly kept on the down low. The astronomy would perhaps have never been a problem for him if it wasn’t for a series of strange events that began with him meeting a witch. And so would begin a strange historic tale of astronomy, witchcraft, intrigue, and a plot to kill the king with necromancy.

In 1432, Bolingbroke became an acquaintance of a woman named Margery Jourdemayne, also known as the “The Witch of Eye,” who had a rather mysterious background. Although next to nothing is known about her early life, it is known that she was of a low social class, married to the cow herder William Jourdemayne. If this was where it ended then she would have been just another faceless person lost to to the inexorable flow of time and history, but Margery managed to raise a lot of eyebrows when she began moving in extravagant social circles way above her pay grade, which already was sparking rumors even before it became known that she was a practicing witch. She became known for peddling various magic potions and telling fortunes and giving horoscope predictions, which is one of the reasons why her and Bolingbroke got along so well, and indeed they first met when she was doing a prison stint for sorcery at Windsor Castle.

When she was released from prison, Margery was back to her old ways, indeed gathering quite a few notable clients for her magical services, including Dukes and generals, who came to her for advice on political decisions or strategies for battle. It was partly for this reason that she mostly avoided any trouble from authorities for her dark arts, and through this all she became best of buddies with both Bolingbroke and a physician and astrologer by the name of Thomas Southwell, who both happened to work for Eleanor giving her magical guidance. It would turn out that Eleanor also knew Margery, and the rumor was than she had even purchased love potions from the witch for the purpose of making Duke Humphrey fall in love with her. This is where it gets into a bit of intrigue hovering in the background.

King Henry VI, who had been king since he was a baby, was just a teenager at the time, and so was unmarried and had no heirs, which basically means that if anything were to happen to him or if he were to remain heirless the throne would fall to Duke Humphrey, who was Henry VI’s uncle and Lord Protector, making him King and Eleanor Queen. She would have known this long before, so the love potion angle seems to fit in, and it also seems to fit in that she was not originally even supposed to marry Humphrey. He had been scheduled to marry someone else before having an affair with Eleanor, who had been the original wife’s lady-in-waiting, and whether this had anything to do with an actual love potion or not, it would not reflect well on Margery later down the line.

Eleanor was becoming more and more curious about how things were going to turn out for King Henry VI, and seeing as she had a witch and two astrologers at her disposal, in 1440 she tasked them with giving a horoscope reading for the young king. They apparently contacted the dead for answers, and the results were shocking, in that they all agreed that King Henry VI was doomed to come down with a deadly illness that would kill him that year, which if true was kind of good news for Eleanor because she would become Queen. Unfortunately for them, word got out about this ominous astrological prediction, and when King Henry VI found out about it he was less than pleased. He even allegedly had other astrologers make the same horoscope reading to find that in fact there was in fact no disease in his immediate future. It turns out that using magic to predict the death of a king is not the best idea, and Bolingbroke, Southwell, and Margery were all arrested and charged with plotting to kill the king with necromancy. 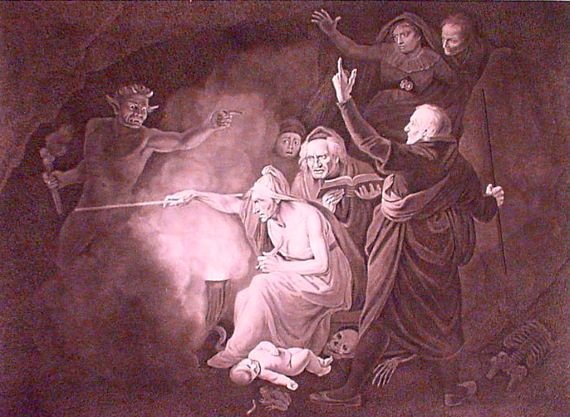 The accused were questioned, and by questioned I mean tortured, during which time Margery admitted to selling love potions to Eleanor, and Bolingbroke told of how he had planned to use dark magic to kill the king through the use of a wax effigy at the behest of the Duchess. All of this heavily implicated Eleanor, and she fled in fear of being tried by a zealous religious court. The remaining three were brought before a court, Margery Jourdemayne was found guilty of producing magic potions and sentenced to burn at the stake, Bolingstock got it even worse, found guilty of the more serious charge of “treasonable necromancy” and hanged, drawn, and quartered, his head then displayed on a spike at London Bridge. Southwell would die while imprisoned at the Tower of London, although he would have been executed too, so maybe he got off lucky.

It would turn out that the Duchess would not escape being punished. She was eventually found guilty in a secular court, arrested, sentenced to life in prison and forced to divorce Humphrey for good measure. Humphrey didn’t exactly come out of it unscathed himself. Although he was found to have had nothing at all to do with the black magic and necromancy angle of it all, the whole affair had been a massive scandal that had reverberated throughout Europe, staining his reputation and making sure that any hopes he had of ever being king were dashed. Humphry would die under mysterious circumstances in 1447 and Eleanor would die after 10 years in prison. In recent years it has been speculated that this was in fact all a plot by Humphry’s enemies and that the accused had actually all been innocent, but that doesn’t help them much. In the centuries since, Bolingbroke’s story has become legendary, and the source of song and story, including Shakespeare in his Henry VI, Part II. We cannot be sure exactly what really happened here, or how much has been warped through retellings, but we do know that Bolingbroke and his co-conspirators definitely did get executed for what they allegedly had done. Was this all due to real witchcraft and magic, was it a misunderstanding, or was it the machinations of enemies of the Duke? We may never know for sure, but it is a curious historical oddity that manages to smoothly meld eccentric figures, conspiracies, political intrigue, and black magic, and it is an interesting tale at the very least.