A Harvard professor named Avi Loeb has made some pretty interesting claims over the years. You may remember his name as he claimed not long after ‘Oumuamua was discovered back in October of 2017 that it was an alien spacecraft instead of an interstellar object passing through our Solar System.

Needless to say, there have been many theories in regards to what ‘Oumuamua is actually is – being a piece of a planet that broke apart or just a large chunk of hydrogen ice were only two of the numerous theories out there.

As for the alien spacecraft theory, Loeb came to this theory not only because it came from another star system, but also because of its unusual cigar shape. He claimed that it was an ancient type of spacecraft that ended up being covered with debris over the years from traveling through space. He added that the object was much more reflective than a normal space rock. 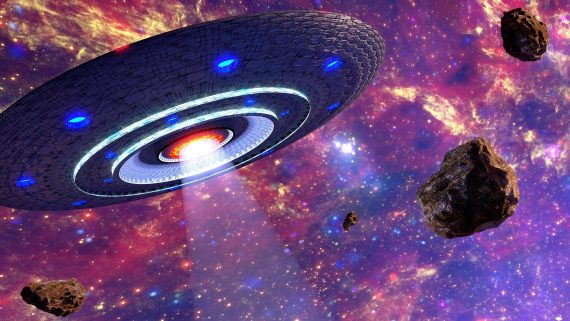 He has again made headlines claiming that there are possibly a quadrillion alien spacecrafts traveling just in our Solar System alone. In fact, he went as far to say that alien spacecrafts may outnumber humans by more than 140,000 to one. While that’s pretty hard to believe, he is very committed to this new theory.

In a recent interview with New Statesman, he claimed that there are countless more alien spacecrafts like ‘Oumuamua and that experts may find many more of them in the future. He described his theory by saying in part, “There should be one in every volume roughly the size of the orbit of the Earth around the sun... it's pretty small. So it means that there are plenty of them, a quadrillion of them, inside the Oort cloud. Inside the solar system. There are lots of them.”

Going back to the hydrogen ice theory, Greg Laughlin, who is a professor of astronomy at Yale University, stated back in June of last year, “This is a new type of object, but it looks like there may be many more of them showing up going forward.” Numerous more hydrogen ice objects sounds a lot more plausible than a quadrillion alien spacecrafts. But you never know as anything is possible. I just hope they don’t all decide to visit Earth at the same time...