Astronomers made a pretty significant discovery when they found a “Sextuply-eclipsing sextuple star system” in our Milky Way Galaxy. These six stars that are continuously orbiting each other and causing regular eclipses have been named TIC 168789840.

Since the six-star system is located a little less than 2,000 light-years away from Earth, our telescopes can’t see each star individually but instead just a blurry spot of light. What they were able to notice was that the blurry spot would become brighter and dimmer in an odd pattern which indicated that the stars were eclipsing each other. And since they are directly lined up with Earth, astronomers are able to witness the eclipses.

They used the NASA supercomputer Discover to analyze years worth of data collected from TESS (Transiting Exoplanet Survey Satellite) which studies changes in light emitted from stars. A type of artificial intelligence called a “neural network” on the Discover supercomputer searched for dimming and brightening patterns in stars that could possibly indicate a complex star system. While the majority of them ended up being binary systems, they did find the TIC 168789840 six-star system.

This is a pretty rare discovery as only three other six-star systems have been previously found which includes the Castor system that was identified back in 1920. While it was first identified as a binary system in the constellation Gemini back in 1719, nearly two centuries later in 1905, astronomers found that the two stars were actually two pairs that were orbiting each other and traveling around a common center. And then in 1920, that’s when a different team discovered another pair of stars that were orbiting the other four.

According to the author of the study, “TIC 168789840 is most similar to the famous Castor system.” They explained how the two inner pairs of stars orbit each other in a tight circle – one pair completes a full binary orbit every 31 hours while the second pair does an orbit every 38 hours. It then takes the “inner quadruple” 3.7 years to complete a full circuit around the common center. The two outer stars complete a full orbit around each other every 197 hours and it takes them about 2,000 years to complete a full circuit around the entire system. 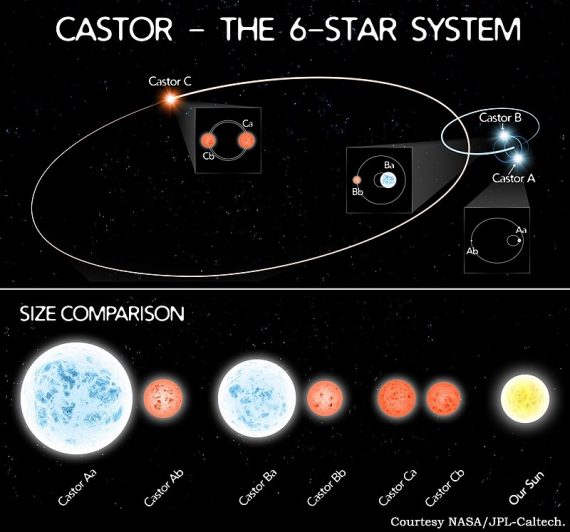 And there may be more six-star systems out in space as the authors wrote in part, “TESS has allowed us to find well over 100 such candidate multi-star systems to date, with the analysis of another sextuple system … to follow this in the near future.” Their research can be read in full here.

The Bizarre Disappearance and Death of David Lewis