Crocodiles Survived the Dinosaur-Ending Asteroid and Have Barely Changed Since

Incredibly, crocodiles survived the deadly asteroid that killed off the dinosaurs around 66 million years ago and have barely changed in appearance since then. In fact, they look very similar to crocodiles that roamed the Earth about 200 million years ago during the Jurassic period.

Based on new research, it is believed that since their body shape was so “versatile” and “efficient”, they were able to survive the massive changes in the environment caused by the asteroid impact. Even though crocodiles prefer to live in warmer climates, they are still able to live in total darkness and can survive in or out of the water (they can hold their breath for up to an hour underwater). And since their bodies are so strong and tough, they can survive many types of injuries. 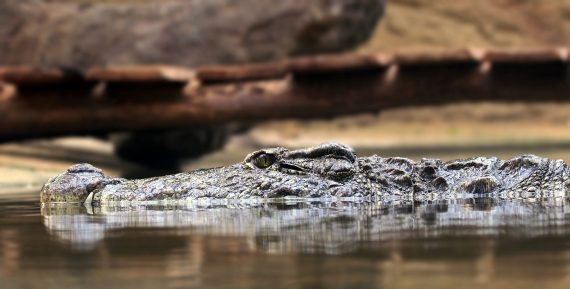 Researchers from the University of Bristol claimed that since their bodies were versatile and efficient enough to survive the massive global impact of the asteroid, crocodiles didn’t need to evolve much more than that (the evolution pattern they followed is known as “punctuated equilibrium”). Lead author of the study, Dr. Max Stockdale, stated, “This could be one explanation why crocodiles survived the meteor impact at the end of the Cretaceous period, in which the dinosaurs perished,” adding, “The crocodiles landed upon a lifestyle that was versatile enough to adapt to the enormous environmental changes that have taken place since the dinosaurs were around.”

He went on to explain, “Our analysis used a machine learning algorithm to estimate rates of evolution. Evolutionary rate is the amount of change that has taken place over a given amount of time, which we can work out by comparing measurements from fossils and taking into account how old they are.” “For our study we measured body size, which is important because it interacts with how fast animals grow, how much food they need, how big their populations are and how likely they are to become extinct.”

Another interesting fact was that birds appeared millions of years after crocodiles and there are still about 10,000 species in a variety of shapes and sizes from ostriches to hummingbirds. Crocodilians, that have been around much longer than birds, only have 25 species remaining today and they all pretty much look the same with long snouts, armored skin, and powerful tails.

It’s incredible to think that a species has barely changed in appearance in hundreds of millions of years. But as the old saying goes, “if it ain’t broke, don’t fix it”.

While crocodiles have been called the “ultimate survivors”, researchers still have a lot more work to do, such as figuring out why some prehistoric crocodile species died off and others did not. The study was published in Nature Communications Biology where it can be read in full.