"There are no more large unknown animals still to be found." Those words were messaged to me just a few days ago while I was having a debate on the nature of the Chinese equivalent of Bigfoot. Its name: the Yeren. While I broadly agree with those quoted words, there's an important issue to note. Just because there probably aren't any large - and completely unknown - animals left to be found, doesn't mean large animals, of a known nature - and that are assumed to have become extinct - aren't still with us. They almost certainly are with us. For example, let's take a closer look at the Yeren. One candidate for it is Gigantopithecus blacki. It was a massive ape that lived in the distant past and which some Bigfoot researchers are convinced may explain sightings of large, anomalous apes in some of the wilder, desolate, and forested areas of China today. There is just one problem with this particular theory: mainstream science, biology, and zoology all assure us that Gigantopithecus blacki became extinct thousands of years ago. Just maybe, however, it didn’t.

In terms of what is known about Gigantopithecus blacki, we have to travel back in time to a relatively recent period: the 1930s. The immense beast has the thorny problem of nothing less than male impotence to thank for its discovery. For years, Chinese herbalists and doctors (some accredited and some not) have utilized fossilized teeth to create cocktails that, so they claim, can cure the embarrassing ailment of being unable to "get it up." Since the Chinese landscape is rich in fossilized bones, people have made significant profits from selling such items to apothecaries all across China. It turns out that in 1936 a German man named Ralph von Koenigswald came across a huge fossilized tooth – specifically a molar – in a Hong Kong apothecary. It was highly fortuitous that von Koenigswald was the man that made the discovery, since he was a paleontologist, and instantly recognized the significance of what had fallen into his lap. Not only was the molar giant-sized, von Koenigswald was able to determine it came from a primate – and a large one; a very large one. In the immediate years that followed, von Koenigswald found further such examples and coined the term Gigantopithecus blacki – the former word standing for "gigantic ape" and the latter a reference to a deceased friend Davidson Black. 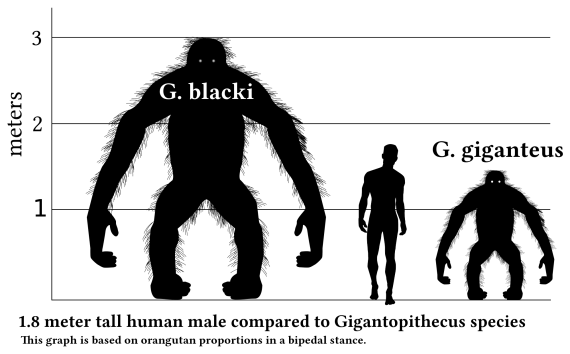 In other words, and in my mind, the Yeren is also Gigantopithecus blacki. They are one and the same. So, the Yeren is certainly not unknown. It still lives, but under a different name. Now, let's take a look at the controversial matter of giant lizards in the massive forests of Australia. Like the Yeren/Gigantopithecus blacki issue, these immense, dangerous lizards are in no way unknown. Instead, mainstream zoology - for the most part - refuses to believe they still exist. Former zoo-keeper Richard Freeman says: "I would pretty much stake my life on the fact that giant lizards still exist – or did until very recently – in the large forests of Australia, and that also roamed New Guinea. This was a huge, killer-beast; a massive monitor lizard that exceeded thirty feet in length. In literal terms, this was a classic dragon-type animal."

The creature in question went by the name of Megalania prisca, a huge, vicious, monitor lizard that roamed Australia at least as late as 40,000 years ago. It got its name thanks to one Richard Owen, a paleontologist of the 1800s – a man who has gone down in history as coining the term Dinosauria, or, in English, "terrible reptile." Generally referred to as just Megalania, its title very appropriately translates to "ancient giant butcher." Many might consider it utterly absurd to believe that packs of thirty-foot monster-lizards could still exist in stealth, in the wilds of modern-day Australia, and not be found. But, let’s take a look at what we know of this undeniably controversial saga. For decades, reports have surfaced out of Australia of such creatures – to the extent that Australian monster-hunter, Rex Gilroy, has been able to put together an extensive dossier of such accounts.

The Australian Museum says of this immense monster – that moved as easily and effortlessly in swamps and lagoons as it did on land – that: “Megalania prisca, the largest terrestrial lizard known, was a giant goanna (monitor lizard). First described from the Darling Downs in Queensland by Sir Richard Owen in 1859, Megalania lived in a variety of eastern Australian Pleistocene habitats - open forests, woodlands and perhaps grasslands. Megalania prisca would have been a formidable reptilian predator like its relative the Komodo Dragon of Indonesia, and may have eaten large mammals, snakes, other reptiles and birds.”

Moving on, there are the words of Following the Nerd: "In 1890 in the village of Euroa, Victoria, a thirty foot lizard terrorized the villagers, resulting in a squad of forty men armed to the teeth going out to hunt it down only to find it had disappeared. They called it a monstrous goanna, something that the Aborigines recorded in their history as the horny-skinned bunyip goanna and it goes right back to the Dreamtime. Now a goanna is a name for a monitor lizard, but nothing the size of these things. Settlers to Australia were warned by the native people to beware of this variety of goanna. These could grow to thirty feet in length and had powerful jaws. To the people these really were dragons come to life and a threat like nothing they had ever faced."

Further accounts of these dangerous giants continued to surface. In January 1940, the Northern Standard newspaper (which covered the Australian city of Darwin) made significant page space for its readers. Indeed, the headline itself was: "Seeking an 18ft Lizard." It told of the ambitious, and maybe even dicey, plans of one Fred Blakeley. It was Blakeley’s plan to try and bring one of the giant creatures back alive. The journalist who wrote the article said: "He hopes to bring back one alive. He claims to be one of the few white men who have seen a giant Prenty. He describes it as a mammoth lizard about 18 feet from snout to tail-tip. Its claw tracks are about 6 feet apart. The claws are sharp and poisonous and inflict a wound which festers quickly and rarely heals. The giant Prenty, he says, attacks chiefly with its tail. It can fell an ox with a sweeping blow. It is faster than a crocodile and its gait resembles a gallop. The Aborigines call the Prenty a debil debil, Blakeley told the Northern Standard." Although the monster-lizard remained elusive, I would bet that all of those legends of giant lizards in Australia were provoked by rare sightings of Megalania prisca.

It's all very simple: the Yeren is Gigantopithecus blacki and those strange and deadly lizards are Megalania prisca. Against the odds, both have managed to cling on. In the process, though, they have become "unknown animals." They're not unknown. They are just incredible survivors from earlier eras.