Dinosaurs on the Moon? Asteroid Impact May Have Thrown Dinosaur Bones Onto the Lunar Surface

According to a book called “The Ends of the World” that was written by an award-winning science journalist named Peter Brannen, dinosaurs may have beat humans to the moon – or at least their bones may have. An excerpt of Brannen’s book was recently shared on Twitter by a blogger named Matt Austin.

We all know that the dinosaur-killing asteroid that struck the Earth about 66 million years ago was incredibly massive, but was it powerful enough to send pieces of the dinosaurs into space? According to Brannen, the answer is yes.

He claimed that since the asteroid sent up large volumes of earth into space, it’s very possible that “bits of dinosaurs” were mixed in with it. And since the soil that was flung into space landed on the moon, it’s very plausible that the pieces of dinosaurs went with it, therefore, dinosaurs made it to the lunar surface millions of years before humans.

In his book, he described that when the asteroid impacted Mexico’s Yucatán Peninsula, it was speeding towards Earth approximately 20 times faster than a speeding bullet. It read in part, “This is so fast that it would have traversed the distance from the cruising altitude of a 747 to the ground in 0.3 seconds.”

It went on to read, “As the asteroid collided with the earth, in the sky above it where there should have been air, the rock had punched a hole of outer space vacuum in the atmosphere.” “As the heavens rushed in to close this hole, enormous volumes of earth were expelled into orbit and beyond — all within a second or two of impact.” And when Brannen posed the question, “So there's probably little bits of dinosaur bone on the moon,” geophysicist Mario Rebolledo from the Centro de Investigación answered with, “Yea, probably.”

Scientists did reveal what they believe happened during the impact. When the asteroid struck Earth, it left a gigantic crater (called the Chicxulub crater) and upon impact it sent massive amounts of carbon dioxide as well as sulfur into the atmosphere. At that point, the sun would have been blocked by a major dust cloud, probably causing an immediate “nuclear winter” as temperatures on Earth would have dropped dramatically in addition to acid rain falling to the ground. 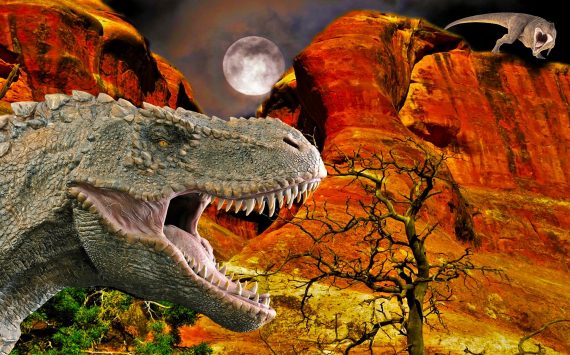 Mark Richards who is an earth and space science professor at the University of Washington explained this further, “It would have felt like the ground beneath your feet had become a ship in the middle of the ocean.” “Then rocks would have bombarded you from a boiling sky that was beginning to take on a hazy glow. It would have seemed like the end of the world.”

While no dinosaur bones have been found on the moon as of yet, the next astronauts to travel to the lunar surface should definitely consider looking for the remains. Wouldn’t that make for the next great science movie?! The excerpt that Austin posted from Brannen’s book can be read here and on his Twitter page.