Some of the best UFO stories, often very credible or at least the most entertaining, are those that come from top officials that typically would be considered "in the know." At the very least they serve to be a podium from which their strange stories are certainly more paid attention to than some nobody out in the boondocks, and here we will look at the bizarre story of a British politician and his bonkers claims. Buckle up, maybe even put on your tinfoil hat, because we are going for a ride.

Simon Parkes is not a nobody. His mother worked for the British intelligence agency MI5 from 1965 to 1979 and also worked for the NSA, while his grandfather was a diplomat working for MI6 and also at the UN in the late 1950s and early 1960s. Parkes would follow in these footsteps, carving himself quite an impressive career, becoming a politician himself and going on to be elected as a councillor for the Whitby Town Council, in Whitby, in the Scarborough borough of North Yorkshire, England. He is mostly respected and well-received, but in 2012 he began coming forth with some outlandish claims that quickly derailed to leave the public in doubt as to his ability to serve in office. You see, this particular politician has had a range of some extremely weird alien experiences, to say the least.

Parkes claims that he has been a regular alien contactee since his very young childhood, when he says he had contact with several different alien species, including the “Greys,” which are the typical image the mainstream has of aliens, as well as the Reptilians, said to be sort of like large lizard people, and the insect-like Mantids, which look about like what the name implies, as well as a veritable menagerie of cat-like aliens, small and tall Grey entities, Crystalline beings, and other assorted creatures like the cast from a Star Wars movie. When he was only 6 months old, he says that he was approached by an alien woman with green skin, eight fingers, and standing 9 feet tall, who somehow was able to make a telepathic connection with his infant mind to tell him that she was in fact his real mother. Parkes has said of this:

Two green stick things came in. I was aware of some movement over my head. I thought, ‘they’re not mummy’s hands, mummy’s hands are pink’. I was looking straight into its face. It enters my mind through my eyes and it sends a message down my optic nerve into my brain. It says ‘I am your real mother, I am your more important mother.

Over the years this alien woman came to him many times, and he met all manner of different types of aliens as well. He claims that when he was 3 years old he was cured of chicken pox by an “8-foot-tall alien doctor dressed as a waiter,” and when he was 11 years old, he says that his “real mother” took him aboard her spaceship for his first of many visits to the orbiting vehicle. They would apparently teleport aboard, and he says of the process of getting there, “What will happen is that we will hold hands and I will say ‘I’m ready’ and then the technology I don’t understand will take us up to a craft orbiting the earth.” Even more bizarre still are his claims that he would regularly mate with a feline alien he calls “The Cat Queen” four times a year and that he is the father of an alien hybrid child. No, I am not making any of this up, now that you ask.

Through these years Parkes says he became especially involved with the alien species called the Mantids, which he claims aim to repopulate the earth with alien hybrids and are peaceful, and the Reptilians, which he describes as more malevolent and responsible for many problems in the world, “guilty as hell,” as he says. There are also the Nordics, a race of aliens that look like tall, blonde haired, blue eyed, well, Nordic people, and in 2015 he made the bizarre claim that aliens were responsible for a ceasefire signed in Minsk, and that the Nordics were providing technology to Russian president Vladmir Putin. Say what? Parkes explains:

Putin had been part of a group advised by reptiles. Nordics made a counter offer to Putin. The technology the Nordics are giving to Putin is on a par with America. The Nordics have told Putin he no longer has to toe the American line, hence his resistance. 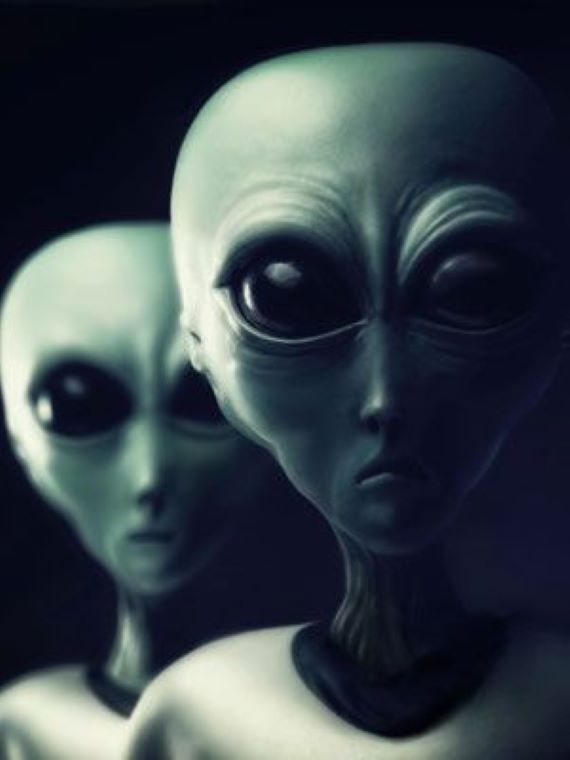 These seem to be the kinds of tales spun by tabloids and people who are seen as perhaps not completely stable rather than those of a respected politician, and as soon as he began making these public claims shortly after being elected to his post on the Whitby Town Council there was shock and worry that all of this alien stuff was perhaps influencing his work and his mind. Parkes has calmly denied that it has interfered with any of his responsibilities, even claiming they have made him a better councilor, saying:

For many people who don’t experience it, it’s very hard to accept. We are taught to only see and believe what we can touch, but it’s acceptable to believe in religion. I get more common sense out of the aliens than out of Scarborough Town Hall. The aliens are far more aware of stuff. People in the Town Hall seem not to be aware of the needs of Whitby. It’s a personal matter and it doesn’t affect my work. I’m more interested in fixing someone’s leaking roof or potholes. People don’t want me to talk about aliens.

Parkes in the meantime has created several YouTube videos in which he discusses all of this in depth, and while he has his share of detractors who think this is all very inappropriate for an acting politician there are others who support what he has done. Among those who believe in UFOs it has been seen as a step towards government disclosure on the existence of aliens, and that Parkes brave move to come forward with his experiences will encourage others in office to do the same. One resident named Tony Richardson has said of this:

First of all, it’s very brave of Simon. He has opened himself up to a lot of ridicule. People should come out and give a platform to other people to make us realize what we are seeing. I think it will bring more people forward.

Parkes has in the meantime further derailed a bit. He hasn’t done himself any favors with skeptics by going on to help those with “Illuminati families/bloodlines” and helping brainwashed individuals to re-integrate multiple personalities, as well as “remove any Jinn/demonic possession and "de-activate" any "suicide programmes placed in the person,” as well as peddling what he calls “5GBioShields” on his website. Odd to say the least, and we are left to wonder just what to make of this eccentric man. He is by all accounts a very intelligent and eloquent individual, with no known history of mental problems and with a sterling record as a politician, so just what is going on here? Is this an honest peek into possible answers to the questions we are all searching for or a big scam and elaborate fiction? Who knows, but it is yet another case of a higher up coming forth with very strange information.

The Stone Age May Have Lasted 20,000 Years Later Than Previously Thought