Earth’s Rotation is Speeding Up — Should We Be Worried?

From the “Things we never knew we should worry about” file comes this story from the world of atomic clock keepers (good work if you can get it). At the end of 2020, the International Earth Rotation and Reference Systems Service confirmed that there would be no leap second added to the world’s atomic clocks responsible for official and precise timekeeping. This is a decision made every six months because the Earth’s rotation is not steady, precise and unwavering. To compensate as we do every four years with the Leap Day, atomic clocks get adjusted by leap seconds. Leap seconds have been added 27 times since 1972. That would seem to be a sign the planet’s rotation is slowing down … except the International Earth Rotation and Reference Systems Service announced that a leap second may be SUBTRACTED in 2021 because the rotation has suddenly sped up. Sure, we were in a hurry to get out of 2020, but that was just a figure of speech. If Earth really is spinning faster, should we be worried? 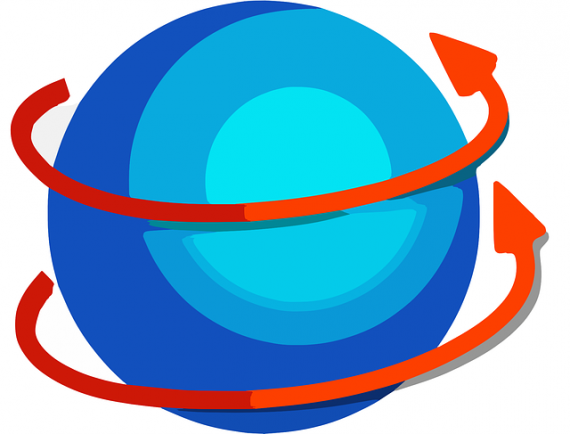 According to Timeanddate.com (“the world’s number one website on time”), the speed-up actually began last year -- the shortest day in 2020 was July 19, when the planet completed one spin 1.4602 milliseconds faster than 86,400 seconds (the average length of a day). They’re predicting that the acceleration will continue and astronomical days in 2021 will clock in 0.05 milliseconds shorter than average, which adds up to a 19 millisecond lag in atomic time – enough to necessitate subtracting a second from the atomic clocks. This is more controversial in atomic time circles (Atomic Time Circles -- a great name for a band) than adding leap seconds, but both can cause problems. The New York Post reports that an added leap second in 2012 caused server crashes across a number of internet sites, including Reddit, Yelp and LinkedIn, and disrupted those using Linux operating systems and Javascript software.

We feel their pain, but what about the rest of us? Are we going to spin off the face of the Earth?

Earthsky.org says Earth’s rotation can be affected by a variety of events, ranging from slight changes in the distribution of mass in the Earth’s molten outer core, to movement of large masses of ice near the poles, to the density and angular momentum variations in the Earth’s atmosphere, to global warming (you knew it was coming) melting massive amounts of glaciers and polar ice. Severe seismic phenomena like the 9.0 Fukushima earthquake in 2011 caused displacements of portions of the Earth’s crust that sped up Earth’s rotation, shortening the day by 1.6 millionth of a second. As you can see, it’s difficult to determine what exactly is speeding things up.

The good news is, we’re not in any danger of spinning off the face of the Earth – although it wouldn’t hurt to cut back on the greasy foods and fix that oil leak on your old car. We should be more worried about the possible negative effects on technology that a negative second could cause. Then again, we should be worried about that in general, with bad actors threatening to disrupt the power grids, the Sun constantly hitting us with solar flares and squirrels continuing to nibble on power lines.

Yes, things CAN get worse!

The Bizarre Case of a Man From Nowhere