That quote or variations to that effect are attributed to ufologist, television personality and comb ignorer Giorgio A. Tsoukalos, but it could easily be linked to another person when it comes to discussions of ‘Oumuamua, the first known interstellar object to be detected passing through our Solar System. That person is astrophysicist and Harvard professor Abraham "Avi" Loeb, who pushed the possibility of ‘Oumuamua being an alien spaceship almost from the moment it was detected. Loeb has now made his theory an official position by defending it in his forthcoming new book: “Extraterrestrial: The First Sign of Intelligent Life Beyond Earth.” So, if Avi Loeb says ‘Oumuamua is aliens’, is it aliens’ (possessive punctuation intended)?

“This would make ‘Oumuamua’s geometry more extreme by at least a few times in aspect ratio — or its width to its height — than the most extreme asteroids or comets that we have ever seen.” 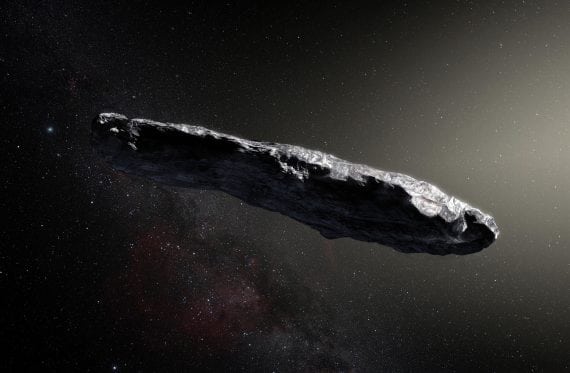 Loeb was first attracted to the ‘Oumuamua-is-a-spacecraft theory, besides the fact that it was obviously from another star system, because of its cigar shape which is highly unusual for an asteroid or comet. The difficulty that experienced astronomers had in determining what kind of space rock it was (most eventually settled on comet) supported his theory that it may instead be an ancient form of spacecraft covered with space debris picked up from its long trip – especially if it was empty of life forms. The lack of life signs convinced others it was just a rock – Loeb didn’t buy this because ‘Oumuamua lacked a tell-tale tail. Loeb also noted that ‘Oumuamua was far more reflective than a space rock.

“The excess push away from the sun — that was the thing that broke the camel’s back.”

The New York Post, which reviewed the book, notes that Loeb no longer sees ‘Oumuamua as cigar-shaped – his later calculations showed it could be disk-shaped (the angles it was viewed at distorted it to the cigar), making it more like a vinyl record … or a light-sail. That fits in with another theory of Loeb’s that laser-pushed light-sails are the best way to travel between star systems. If humans can conceive this, why not other intelligent civilizations? Even better – if ‘Oumuamua was really sail-shaped, that acceleration when moving away from the sun could have been the remnants of its actual sail-like automatic propulsion system … one that still works despite no life forms controlling it.

“(This book) should motivate people to collect more data on the next object that looks weird. If we find another and we take a photo and it looks like a light sail, I don’t think anyone will argue with that.”

Well, looking at weird things has become a popular pastime during the pandemic, so that’s not a problem. Not many experts agree with Loeb’s light-sail theory, and even less agree ‘Oumuamua is a spacecraft. Loeb tries to inspire doubters with his theory that the best way to look for extraterrestrial life forms is to look for their junk – which is what ‘Oumuamua-as-a-spacecraft is. It’s akin to archeologists searching through ancient trash piles and latrines – techniques which, despite the obvious grossness, is one of the best ways to learn about a civilization … and why it may not have survived.

“It would put us in perspective. If we are not alone, are we the smartest kids on the block? If there was a species that eliminated itself through war or changing the climate, we can get our act together and behave better. Instead, we are wasting a lot of resources on Earth fighting each other and other negative things that are a big waste.”

That’s one of the reasons this writer has not given up on Avi Loeb’s sometimes unbelievable theories. There’s much we can learn from other civilizations when we stop thinking we’re superior to them.

The Weird Story of the Wardle UFO Incident