There are many traditions and customs throughout history that are looked back on as being rather distasteful, morbid, or grim. Times change, and so do our beliefs and what we consider to be normal. The past can sometimes almost seem to be an alien world compared to what we know today, their practices arcane, creepy, or even downright appalling or gruesome by modern sensibilities. One such practice can be seen in Victorian England, during which time the dazzling new technology of photography was used not to record the living, but rather the dead.

While we may take photographs for granted today, with nearly everyone with a handheld device capable of capturing images and sending them to anywhere in the world instantaneously, photography was long an inaccessible dream. It was only in the 1840s that the general public would have access to the ability to take photographs, and this came in the form of what is called the daguerreotype process. Invented by Louis-Jacques-Mandé Daguerre, it was the first photographic process available to the general public, and consisted of polishing a sheet of silver-plated copper to a mirror finish, treating it with fumes that made it light sensitive, and then exposing it in a camera for as long as was needed, which could range from just a few seconds to much longer. It was an expensive, laborious process, yet groundbreaking in that before the advent of the daguerreotype people had long relied on painted portraits to preserve the memories of loved ones, which was even more expensive and time consuming. Portraits had long been only within the realm of the super-rich, so with the development of the daguerreotype the middle class were finally able to capture images faster and comparatively more cheaply. 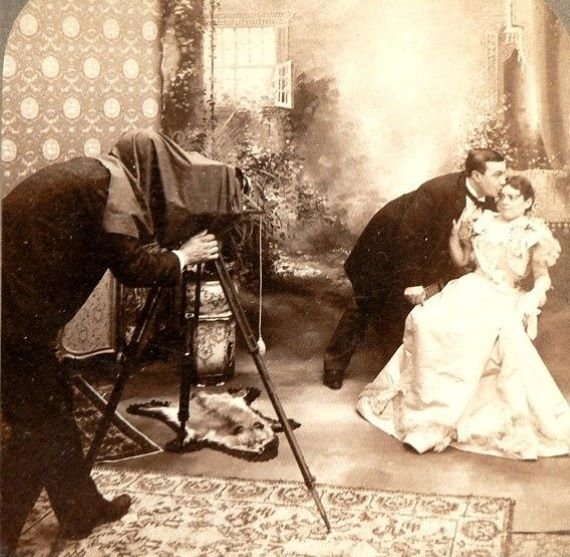 In England the practice of taking photographs became more commonplace, and one area where it came in handy was in preserving the image of the deceased. Victorian England was a place where death seemed to never be too far away. Epidemics of diseases like diphtheria, typhus, scarlet fever, measles, and cholera were always a looming threat, and medical knowledge was crude and incomplete, lacking proper vaccines or antibiotics and with bizarre treatments often just as dangerous as the ailments and afflictions they sought to cure. Infections were also much worse back then, with an injury that would be easily treated today being akin to a death sentence at the time. Death was not a stranger to these people, and those who did die usually did so in the home rather than at hospitals. People of the era wanted something to remember their deceased by, but the poor usually could not afford it, and the rich had once had painted portraits made of the dead. With the daguerreotype there was a new option available to more people, and so the practice of preserving images of the dead for what is called memento mori, which literally means "remember you must die," became easier and more accessible than ever before.

The fact that the subjects in these photographs were dead actually made them perfectly suited to the daguerreotype process, as it required the subject to stay still for long periods of time, something the dead are very good at. Usually the family would have a professional memento mori photographer come to their residence to take the photo. During the era these photographers would sometimes take up to several days to reach the location, meaning that they had to be skilled in how to move and arrange a corpse for which rigor mortis had already set in, so many of them had some sort of funeral home training. 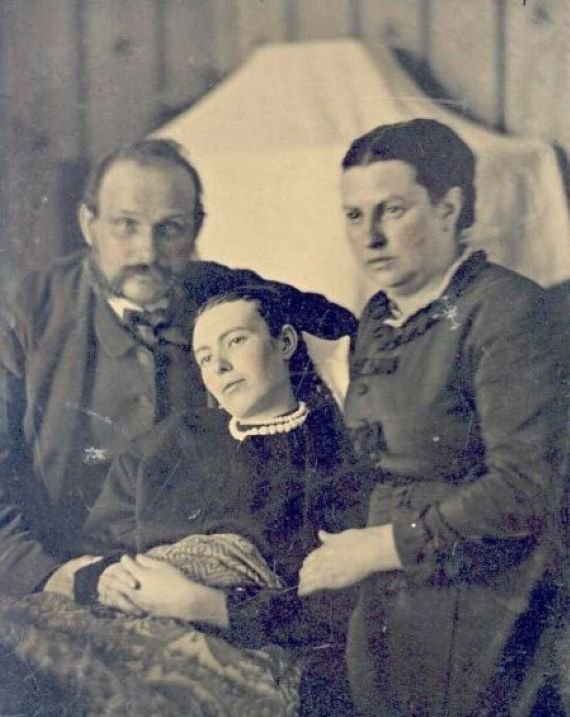 Once they arrived at the residence, the whole process was an art as much as anything else. Often, the subject would be dressed up in their finest clothes, their hair done up as if still alive, make-up was added to the cheeks to make them have more of a lifelike sheen, and sometimes eyes were even propped open or even painted onto the finished image to complete the illusion that the subject was still alive. One popular position was to seat the deceased in a chair as if posing for a photo in life, and with children it was popular to arrange them with their favorite toys as if playing, or for deceased babies to even be photographed in their mother’s arms. Indeed, having living family members pose in the photograph with the corpse was fairly common. These photographers were typically very skilled, with many of these photographs so well done that it is often hard to know if the person in the photo is alive or dead, or pick out which one posed with a group of living people is the dead one.

However, the types of positions the corpses would be put in varied depending on the family and the desired ambiance. While it was popular to arrange the body and make them look as if they were as lifelike as possible, just as popular was what was called the “Last Sleep.” In these photographs, the subject would be photographed in a lying down position with their eyes closed, giving the impression that they were merely sleeping, signifying a peaceful death that would carry them smoothly into the afterlife. In still others the photograph makes it very clear that the subject is unequivocally dead, as the corpse would actually be photographed within a coffin. 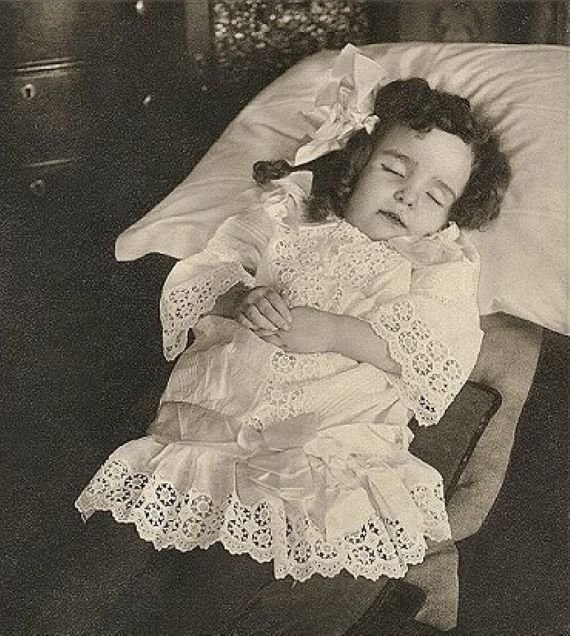 In addition to the actual photograph, often locks of hair would be cut from the corpse to be kept in lockets and worn around, and sometimes a wax death mask was made as well. It all may seem remarkably morbid and macabre for people of the modern era, but this was all done out of love and grieving, a snapshot of the people they would never be able to see again. People wanted to commemorate the dead and have a keepsake to remember them by, and this photographic process made that possible in a time when mortality rates were high, especially among children. Since the process was so expensive, people did not take so many photographs while alive, but rather saved them for after death, as it was only then that families realized that it was their last chance to immortalize the person with a photo and so they finally coughed up the money for it. Indeed, in many cases, the only photograph ever taken of the person was the one taken of them after death.

While Victorian England is the most famous example of photographic memento mori, it certainly wasn’t the only place to practice this. The practice of taking such photographs of loved ones was embraced by Latin America, America, Iceland, India, and others, each with their own different styles and sensibilities. However, although very popular in the 19th century, with the advent of better medical care, vaccines, and access to cheaper photographic techniques, not only did death become less common, but the urgency to take photos after death lessened, with people choosing now to take them while living. This all meant that by the early 20th century the practice of photographing the dead had largely died out. 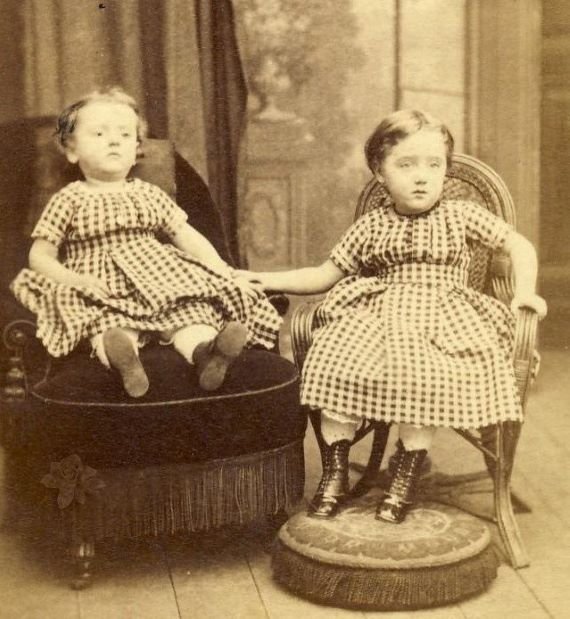 Despite this, the practice managed to maintain a certain macabre allure all the same. Vintage memento mori photographs are in fairly high demand, and in later years there have many fakes produced, or pictures of the living passed off as those of the dead. It is often hard to tell the difference, so even at present there are numerous photos described as memento mori that are either fakes or misidentified photos of the living. One way to tell the difference is if there is any blur in the photo, caused by slight movement or blinking during the photo taking process, which the dead don’t do. Additionally, any photo in which there are metal stands to prop up the arms are probably those of living people. These props, sort of like guitar stands, were meant to help a living person maintain a position for the half hour to an hour it took to get a photograph, they were not meant for the dead.

This might all be seen as exceedingly shocking and macabre for many people of the modern era, but back in the era it was a normal part of the grieving process, the only way for them to hold on to some piece of the ones they had loved. For them this was not horrific or offensive, but rather a loving, touching gesture. We see it as incredibly creepy and disturbing, but for these people it was the thing to do when someone close to them died, and it is interesting just how much the times have changed. Whether you think this was a touching tribute to the tragedy of death, or a sickening peek into a grotesque world you want no part of, it is nevertheless a peek into another era with different thoughts on what was normal and different ways of dealing with death based on the technology they had, and it is all a fascinating historical oddity at the very least.