As long as humankind has been pushing out past our known boundaries explorers have been coming back from their journeys with wild tales of fantastic beasts and peoples. Going out over that next horizon was once akin to traveling off into space to some alien world, and the list of weird stories brought back from these adventures is long. Everything from dog-headed men to men with no heads at all, to all manner of other outlandish exotic beasts and entities populate the annals of exploration, and here we will look at some very weird tribes of people once said to exist, who display some rather odd physical properties.

One very weird tribe encountered in antiquity are called the Sciopodes, also called the Monopods, meaning “0ne foot,” and the Skiapods, meaning “shadow foot.” They supposedly inhabited the wilds of India, and appeared as dwarf-like humanoid creatures, but unique in that they had only one single foot which they used to hop about on. Far from merely a myth, they were reported by many explorers and travelers through the regions they were said to inhabit. One of the earliest reports of the Sciopodes by an outsider was made by the Greek physician and historian Ctesias in his book Indica in the 5th century BC, who insisted they were real and described the creatures as being extremely nimble and able to jump clear over a man’s head with their single giant foot. The Roman naturalist Pliny the Elder, author of the 32-volume encyclopedic Naturalis Historia ("Natural History"), also wrote much on the Sciopodes, using Ctesias as a source and saying of them:

He [Ctesias] speaks also of another race of men, who are known as Monocoli, who have only one leg, but are able to leap with surprising agility. The same people are also called Sciapodae, because they are in the habit of lying on their backs, during the time of the extreme heat, and protect themselves from the sun by the shade of their feet. 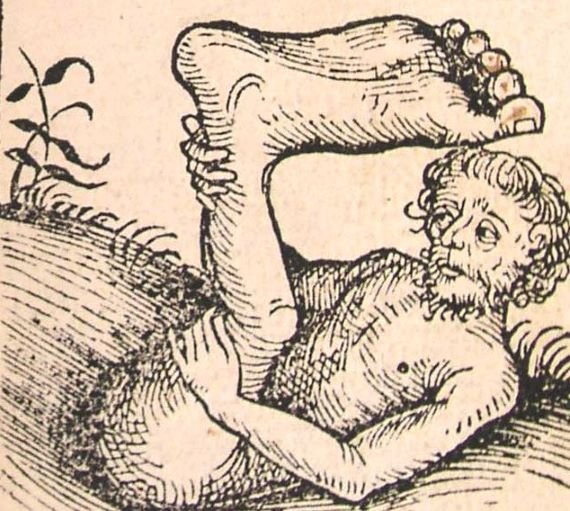 Tales of these one-footed beings were reported by other explorers and writers as well, continuing on into the Middle Ages. Most famously they were mentioned by the Spanish scholar, cleric, and one time Archbishop of Seville, Isidore of Seville, who is notable for his extensive bestiaries, which included the creatures among other more mundane animals as if they were real and claimed they lived in not India, but Ethiopia. It is unclear just how these reports and tales became so prevalent and widespread or from what they could have originated from, but it is certainly curious that people were talking about them as real creatures for over 2,000 years.

Speaking of strangely footed tribes, we also have the tales of the creatures known as the Abarimon or Antipodes, which were people who looked mostly normal except for the fact that their feet faced backwards. They were described as a savage race that lived like animals despite their mostly human appearance, and they were said to run extremely fast despite their apparent handicap, indeed far faster than any man. One of the earliest accounts of the Abarimon comes from a man named Baiton, who was the land surveyor of Alexander the Great. He would be sent into new territories and report back on the landscape, animals, and peoples of the region, and on this occasion he was sent to scope out an uncharted area of India. When Baiton came back, he told of backwards footed men who could run as fast as any animal, but unfortunately he had been unable to bring back a specimen because not only were they too nimble, but he also claimed that the creatures were unable to breathe the air outside of their own valley. They were also mentioned by the Greek explorer Megasthenes, as well as Pliny the Elder and other explorers and travelers, and were usually described as living in remote, high altitude valleys in the Himalayas. 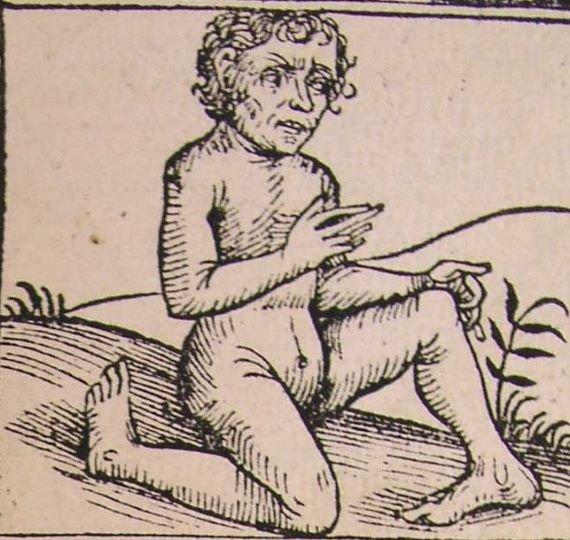 Besides weird feet, other tribes and peoples were said to have other extraordinary physical features. Another legendary tribe supposedly made its home among the remote mountain peaks the Riphean Mountains, in the northern regions of a region of Central Eurasia in classical antiquity called Scythia. The tribe was called the Arimaspoi, also called the Arimaspian and Arimaspos, who were remarkable in that they had just a single eye planted right in the middle of their foreheads. They were legendary in their time, the theme of countless myths and poems, and featuring in much ancient Greek artwork, often depicted as battling griffins in order to steal their gold. However, they were also the subject of many travelers’ tales telling of these creatures actually existing. Herodotus would write of them in his 5th century compendium Histories:

But in the north of Europe there is by far the most gold. In this matter again I cannot say with assurance how the gold is produced, but it is said that one-eyed men called Arimaspoi (Arimaspians) steal it from Grypes (Griffins). The most outlying lands, though, as they enclose and wholly surround all the rest of the world, are likely to have those things which we think the finest and the rarest.

Another notable explorer who mentioned them and who has already appeared in this article and will appear again is Pliny the Elder. In his Natural History he also mentions the conflict between these entities and the Griffins, writing of them:

Also a tribe is reported next to these [i.e. the tribes of Scythia], towards the North, not far from the actual quarter where Aquilo (the North Wind) [Boreas] rises and the cave that bears its name, the place called the Earth's Door-Bolt (Ges Clithron)--the Arimaspi (Arimpaspians) whom we have spoke of already, people remarkable for having one yes in the centre of their forehead. Many authorities, the most distinguished being Herodotus [Greek historian C5th B.C.] and Aristeas of Proconnesus [Greek poet C7th B.C.], write that these people wage continual war with the Grypes (Griffins), a kind of wild beast with wings, as commonly reported, that digs gold out of mines, which the creatures guard and the Arimaspi try to take from them, both with remarkable covetousness. 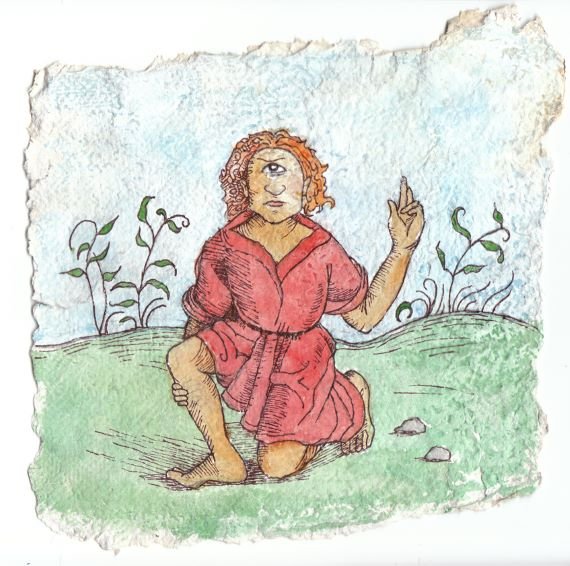 Considering that these are most certainly purely mythical constructs, yet there are plenty of travelers’ tales about encountering them, the Arimaspoi are an intriguing mix of legend and perhaps some misidentification or exaggeration of a real animal or exotic person. Probably one of the most bizarre tribes lost to history of all is yet another one described by Pliny the Elder, this time from a mysterious unnamed island in Scythia. These enigmatic creatures were referred to as the Panotti, and they are almost comical in the way they are described. The Panotti were described as mostly human-like, except for enormous floppy ears that hung down all the way to the ground. The ears were described as so massive, in fact, that the Panotti would wrap themselves up with them at night or in cold weather, and could even use them as a sort of parasol on sunny days. Pliny the Elder would include them in his encyclopedic Natural History, speaking of them as if they were real. Another Roman by the name of Pomponius Mela also wrote of these beings, claiming that they lived not in Scythia, but rather in Scotland’s Orkney Islands where they lived in a tenuous peace with a race of hoofed humanoids called the Hippopodes. 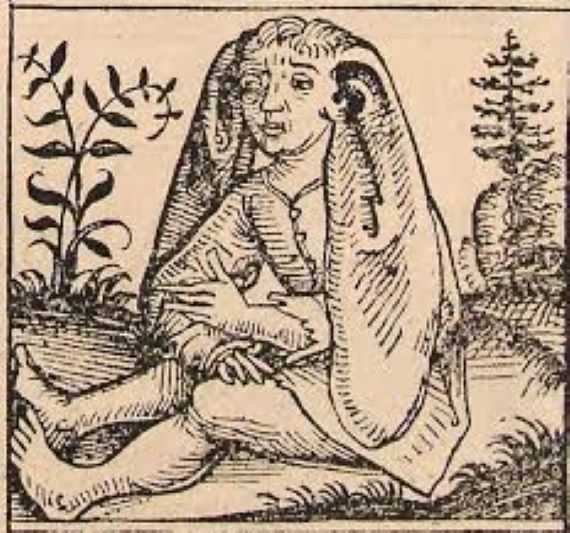 In later years, the German geographer and cartographer Henricus Martellus Germanus disagreed with both of them, and in 1491 claimed the Panotti lived in southern Asia, even putting them on his maps. The Panotti also featured in Hartmann Schedel’s Nuremberg Chronicles, as well as Vlyssis Aldrovandi’s bestiary and encyclopedia of natural history Monstrorum Historia in 1642. Again, is this just a misidentification or misunderstanding, or is it something more? It is hard to tell with these old tales and encyclopedias, as they so often mix mythical lore with the seemingly real, and so we are left to wonder. What are the origins of these fantastical beasts? Were they ever real in any sense at all, or are they purely confined to the realm of the imagination? Whatever the answers may be, they certainly are intriguing tales from an era when sailing out over the horizon was penetrating into a new world.

The Strange Adventures of a UFO Contactee: Orfeo Angelucci