Nuclear Disaster on the Red Planet?

The late Mac Tonnies, the author of After the Martian Apocalypse, had his suspicions that planet-wide altercations of the nuclear kind may have been at the heart of the puzzle of what led to the scarring and destruction of much of Mars. He said: "The D&M Pyramid is swollen and cracked, as if once molten. Despite this, no signs of volcanism are apparent. An unknown dark, sooty material has settled into fine-scale fractures, with a thick concentration near what researchers have referred to as a 'domed uplift,' thought by some to represent an ancient internal explosion [Italics mine]." He also felt that it was important enough to highlight "early speculation by Richard Hoagland and John Brandenburg [who] raised the possibility that the domed uplift…is the result of ‘explosive penetration."

The story, for Tonnies, was far from being over. He posed a thought-provoking question that really caused controversy: "Could the D&M Pyramid have been deliberately destroyed from within by some ancient act of sabotage or act of war?"  Tonnies provided a potential answer to his question: "Brandenburg, a plasma physicist and coauthor, with Monica Rix Paxson, of Dead Mars, Dying Earth, estimates that a one-ton kiloton nuclear explosion [italics mine] could account for the damage visibly seen…assuming the deforming event was of an artificial nature." Tonnies told me: "Unlike other formations in Cydonia, the D&M shows evidence of having been melted [italics mine]. The terrain around the apparent fifth buttress is chaotic and spotted with enigmatic dark areas…Additionally, Mark Carlotto has noted that there appears to be a dark material oozing out of the area associated with the domed uplift. This is consistent with an internal explosion." 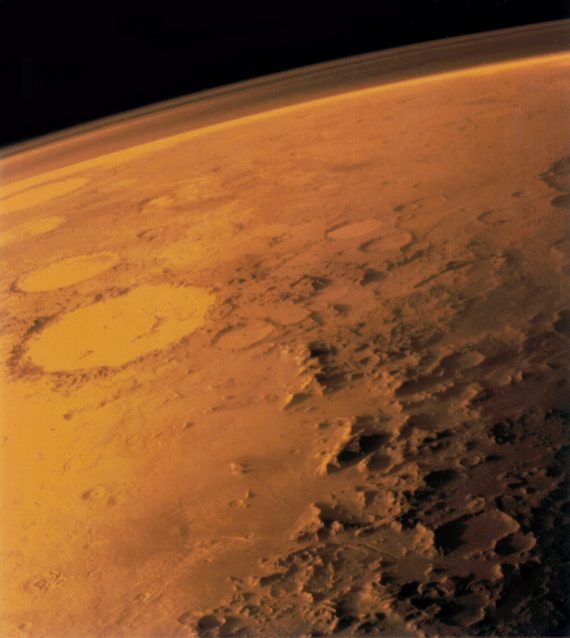 Bruce Rux, the author of Architects of the Underworld, a book that is filled with Mars-based mysteries, says: "…the substantial apparent impact damage on many of Mars’ surface structures, would lend credence to the biblical ‘war in the heavens.’ These include an extremely dramatic hole, one thousand feet in diameter, in Cydonia’s D&M Pyramid, with structural and surface damage and debris, looking very much like it was caused by explosive penetration.” In addition, Rux suggests that the huge pyramid displays evidence of  “clear impacts on the pyramid, with ejecta, high toward the top and lower down on  the flank of its eastern face; the violence of the higher impact had thrown debris clearly over onto the western face."

Certainly, there were equally apocalyptic– but very different - theories for what may have caused the wipe-out of the Martians, as Mac Tonnies acknowledged to me: "Astronomer Tom Van Flandern proposed that Mars was once the moon of a tenth planet that literally exploded in the distant past. If so, then the explosion would have had severe effects on Mars, probably rendering it uninhabitable. That’s once rather apocalyptic scenario. Another is that Mars’ atmosphere was destroyed by the impact that produced the immense Hellas Basin. Both ideas are fairly heretical by current standards; mainstream planetary science is much more comfortable with Mars dying a slow, prolonged death. Pyrotechnic collisions simply aren’t intellectually fashionable - despite evidence that such things are much more commonplace than we’d prefer."

Did a Martian civilization all but destroy itself in a terrible nuclear war in the distant past, as John Brandenburg has skillfully and logically suggested? If that was the case, it’s not at all implausible that the Martians fled their world for ours, as we have seen – and, maybe, even created some form of home for themselves on the Moon, too. It may very well also be the case that the warlike Martians, after settling on the Earth, scarred our landscape in just the way they did to their world – albeit not on a planet-wide scale, thankfully. We’re talking about tactical nuclear weapons and the obliteration of entire cities and their people.

We may never know for sure what or who it was that provoked nuclear exchanges on our world millennia ago; what we can say, however, is that evidence most assuredly does exist to show that apocalyptic-like events did occur. If the Martians created havoc and destruction on our planet, then the chances are that we will never be able to prove it. After all, we are talking about periods in the Earth’s history when human civilization was still in a primitive state and, as a result, we are left with little to nothing in the way of priceless and precious documentation chronicling such calamities.

Catalina Island Shrew Thought to Be Extinct Has Been Rediscovered