Project Thor and the Rods From God

Throughout human history the art and weapons of warfare have evolved continuously, and much as with natural evolution itself, warring sides have been locked in a never-ending cycle of increasing one-upmanship. Our relentless arms race goes way back to ancient times, going from clubs, to spears, to arrows, and beyond, in modern days bringing us firearms, missiles of increasing lethality, and of course nuclear weapons, but even this is not seen as the ultimate weapon of devastation. Research and development has continued to find and refine better ways to kill each other, to beat the other guy, and among these the realm of space has been seen as a sort of last frontier of warfare. What if you could wield weapons of mass destruction orbiting in space where the enemy would be helpless to do anything about it, and what if you could whisk these weapons to anywhere on the globe in minutes to rain down death from above? To the military this is almost too good to pass up, and it might be disturbing to many readers that this science fiction scenario has been hotly pursued. Let’s take a look.

One of the main problems with using space as a battlefield is that it is technically banned, in a sense. The Outer Space Treaty, which was signed by 107 countries in 1967 prohibits nuclear, biological, or chemical weapons from being placed in or used from Earth's orbit. This is a bummer for warmongers, but there is a loophole. What if the weapon wasn’t nuclear, biological, or chemical? How could we devise something that skirted the treaty, yet was still utterly devastating? Lasers have been proposed in the past, but far from what you see in the Death Star in the Star Wars films, lasers just haven’t proven to be that effective at blowing things up. They require too much power to focus, are ineffective at long distances, and simply cost too much to develop. Laser technology for warfare, especially that from space, has been considered largely a dead end, and our technology in this area is woefully inadequate for anything other than perhaps burning through a piece of plywood with a concentrated burst at short range for sustained periods on an unmoving object, or perhaps shining a little mini cat toy laser in an enemy’s eyes. But what if you could just drop something heavy on them from space? It might sound absurd, like something Wile. E. Coyote might try, but this is a very real, and very frightening area of research, and far more powerful than you might think.

It’s called “Kinetic Bombardment,” also known as a “Kinetic Orbital Strike,” which is a lot scarier-sounding than “big heavy thing dropped from space,” and indeed it is scary. The basic premise behind it involves using an inert projectile, no explosives, no moving parts, propellants, or chemicals, just a, well, big solid heavy thing, to drop down from orbit at a target. The idea is that a satellite would carry a magazine of these objects, most likely tungsten rods about the size of a telephone pole and weighing around 9 tons, with fins attached to keep them straight, and more or less just drop them towards a target. So, it’s just a big heavy object falling towards earth, right? You’d just have to get out the way and you’d be fine, right? Well, not exactly.

As it travelled towards the surface of the earth powered by gravity alone, the projectile would gain tremendous velocity and speed, going 8 kilometers per second in orbit and eventually getting up to an impact speed of about Mach 10. When just one of these “rods from God” hit the surface, it would penetrate hundreds of feet into the ground, while releasing its built up kinetic energy to create an explosion roughly on par with over 11.5 tons of TNT (or 7.2 tons of dynamite). If more than one was dropped over an area, they could create incredible devastation on par with a tactical nuclear strike. For instance, one hundred rods would have the total destructive power of 1,150 to 14,000 tons of TNT, approaching the yield of the atomic bomb dropped on Hiroshima, all without the fallout, no radiation, and no need for actual explosives of any kind. Often called Project Thor, there are envisioned to be between 6 to 8 satellites in orbit at any given time carrying these projectiles, giving them the capability to hit any target on the planet’s surface within 10 to 15 minutes from order to launch to impact. This would give the enemy very little time to prepare, and furthermore the launch would be difficult to detect, the rods would be hard to see on radar, and they would be moving so fast that they would be nearly impossible to defend against. It sounds horrifying, and there would not really be much an enemy could do to predict or stop such attacks, but surely this is all just science fiction speculation, right? Again, not exactly. 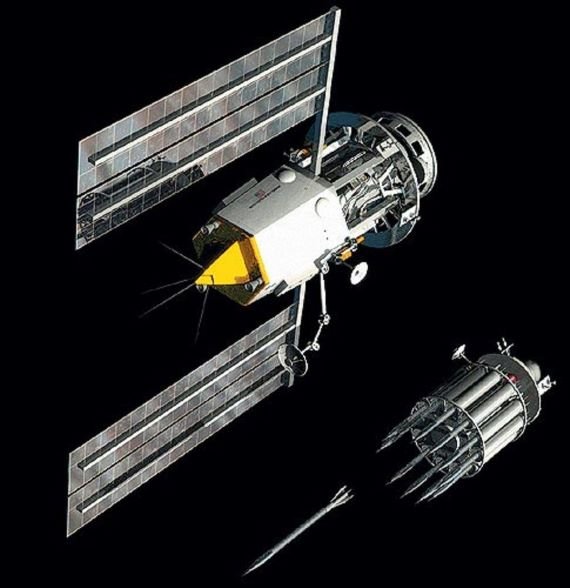 It does sound a lot like science fiction, and indeed the rods from God have appeared in many science fiction stories and were even originally conceived of by Boeing employee turned science fiction writer Jerry Pournelle back in the 1950s, but make no mistake this is not purely fantasy. Indeed, not only is the concept and theory behind it totally sound and achievable, but kinetic strikes in one form or another have already been used in real life. Using heavy solid objects dropped from great heights has been going on since World War I, when masses of metallic objects, called flechettes, were dropped in great numbers on enemy positions from aircraft, with the effect being on par to machine gun fire. During the Vietnam and Korean wars, the U.S. occasionally used what were called “Lazy Dog bombs,” which scattered hundreds of little solid hunks of metal with fins of sheet metal welded on to allow a straighter fall and higher velocity, with each one hitting with enough force to penetrate 9 inches of concrete after being dropped from as little as 3,000 feet. In as recently as 2020, a kinetic weapon, in this case basically a 100 pound modified missile fitted with detachable blades for added lethality, was dropped from an aircraft to obliterate a vehicle carrying a senior Al Qaeda official.

This technology is very real, the theory is sound, and it really works. The rods of God of Project Thor could definitely be a reality today, and the only reason it isn’t is down to money. It just simply costs too much to haul such heavy projectiles into space, making it too cost-prohibitive, with it costing at least $10,000 to carry just one pound into space at the moment. To carry hundreds of 9 ton rods into orbit would be astronomically expensive, and this is likely the only reason Project Thor has not been more seriously pursued. Yet, the plan has continued to come across the table of military officials, and has been reconsidered on more than one occasion, if even in a limited capacity as a bunker busting weapon. If the cost wasn't so exorbitant, they would absolutely pursue this to fruition, and if they can work this out, then who knows? For now we are probably safe, but it does make one look up and hope there is not a satellite up there with a rod aimed at you.

Occult-Driven Secret Societies and Sinister Cults in the U.K.