Just recently I was asked if the kinds of cryptid creatures seen in the United States are broadly similar to those in the United Kingdom. That's an interesting question. Notably, yes, they are mainly the same. For example, in the U.K. we have reports of (1) huge, winged things, (2) Bigfoot-type creatures, (3) water-based monsters, and (4) out of place regular animals - just like those encountered by people in the United States. So, having said that I thought I would make this a 4-part article that would address each of these four, very similar, mysterious phenomena in the U.K. - that also exist in the U.S. I'll begin today with the matter of Bigfoot in the U.K. It may sound strange - or even unbelievable - that Bigfoot-type creatures could live in the United Kingdom. The fact is though, people do see such things. For example, in the early 2000s, there was a wave of sightings of such beasts in the north of England, specifically near the wooded Bolam Lake, Northumberland. One of the witnesses was Jon Downes, who runs the U.K.-based Center for Fortean Zoology. Jon said of his encounter at Bolam:

"At about half-past-four, one of the members of Twilight Worlds [a research group that accompanied Jon to the area] reported seeing something large, human-shaped and amorphous in the woods directly in front of the car-park. As the dusk gathered at about 5 o’clock, we again heard the raucous noise of the crows that he had reported just before dawn. Suddenly, once again, they fell silent and one of the Twilight Worlds members shouted that she could hear something large moving around among the undergrowth. All of the car-drivers present were ordered to switch on their headlights and to put them on full-beam. We did not hear any noise in the undergrowth; although other people present did. Eight people were watching the woods and five of us saw an enormous man-shaped object run from right to left, disappear, and then a few moments later run back again." Interestingly, most of the U.K.-based Bigfoot reports have supernatural aspects attached to them, such as the beasts vanishing before the eye or de-materializing in a flash. 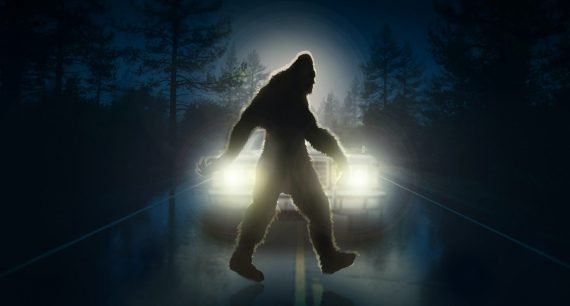 It's not just Bigfoot that's seen in the U.K. There are other kinds of man-beasts, too. One falls into the "Wild Man" category. Consider, for example, the following account of one Ralph, a monk and an abbot at Coggeshall, Essex. Recorded in the year 1200 in Chronicon Anglicanum, it describes the remarkable capture in the area of a wild man of the woods-style creature: "In the time of King Henry II, when Bartholomew de Glanville was in charge of the castle at Orford, it happened that some fishermen fishing in the sea there caught in their nets a Wildman. He was naked and was like a man in all his members, covered with hair and with a long shaggy beard. He eagerly ate whatever was brought to him, but if it was raw he pressed it between his hands until all the juice was expelled. He would not talk, even when tortured and hung up by his feet, Brought into church, he showed no sign of reverence or belief. He sought his bed at sunset and always remained there until sunrise. He was allowed to go into the sea, strongly guarded with three lines of nets, but he dived under the nets and came up again and again. Eventually he came back of his own free will. But later on he escaped and was never seen again."

Now, onto the third kind of man-beast in the U.K.: the Woodwose. A specifically English term that dates back hundreds of years, the Woodwose or Wodewose - possibly derived from a combination of wudu, which means forest, and wasa, that translates in today’s language as being – was, essentially, a hairy wild man of the woods, whose rampaging form can be graphically seen to this very day in countless pieces of priceless medieval European artwork from countries including Germany, Italy and, yes, the U.K. The well-known Cornwall-based anomalies researcher, writer, and blogger, Liz Randall, has spent many a moon seeking out the truth behind the Woodwose legends and says of the creature that it "...is usually shown as a complete, part human, figure carrying a club with the limbs being leafy. It also often shows a thick beard and wears a cap. The Woodwose may also be shown holding the club in different positions. Sometimes this is on its side and sometimes it is raised. There is a theory that a raised club depicts the figure before it was converted to Christianity, but it’s probably more correct to believe that it was raised to ward off evil spirits."

And, finally, there is the Green Man. Liz Randall says of the Green Man – a wild character linked with places perceived as magical, such as woods, glades, and streams, and whose very image provokes thoughts of ancient, proto-humans roaming the land - that: "Usually these figures are male, although there are a very few Green Women, together with green cats, green demons, and green lions. The Green Man can appear in different forms, although there are three types that are normally represented. These are the Disgorging Head, which emits foliage from the mouth; the Foliate Head: which is entirely covered in green leaves; [and] the Bloodsucker Head, which has foliage emerging from all the facial outlets." As for the point of origin for the phenomenon, Liz suggests that the Green Man quite possibly surfaced out of the mythology of fantastic deities and mighty gods in very early times. Perhaps, in the British Isles, she muses, the Green Man arose from the Celtic god of light, Lud (also referred to as Lug or Lyg).

Having now addressed the various types of Bigfoot/Wild-Men in the U.K., in part 2 of this article I'll address the mysterious creatures that lurk in the waters of the U.K.

The Strange Unsolved Mystery of the Vanishing Kingpin