Tales of Adventure and Tribes of Headless Men

Throughout human history we have sought to go ever further out into our world, to penetrate into the dark places of our maps, to venture out past the next horizon. It is a universal desire of our kind to push out past the boundaries of what we know, and since time unremembered this has brought us stories that are fascinating, bizarre, and very often both. Tales of strange creatures and people have been brought forth from the fringes of civilization for centuries, and standing tall amongst them are the numerous reports of tribes of strange, headless humanoid beasts.

One of the most famous of the tales of mysterious headless tribes inhabiting the uncharted wilds of the world is one that once supposedly lived in Libya and other areas of northern Africa, especially along the Nile River system. Here there was said to be a fearsome tribe of massive men, standing 7 to 12 feet tall, with their most unusual feature being that rather than heads, they had faces directly on their chests. The natives of the regions in which they were said to lurk often spoke of them as being extremely aggressive and cannibalistic, more beast than man. One of the earliest mentions of these creatures by an outsider was made in the 5th century by the great Greek writer and adventurer Herodotus, who wrote of them in Histories and called them the Akephaloi, meaning “headless ones.” Herodotus claimed that he had spoken with the Libyans, who insisted that they were very real and not a myth, and came to the conclusion that they were “not merely the stuff of fables.” The tale of the headless tribe may have been lost to history if it stopped there, but more reports would come in the following centuries. 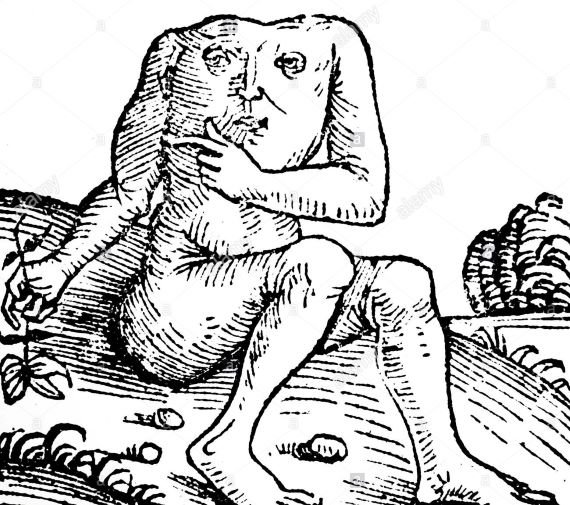 Several hundred years later, the Roman author, naturalist, and natural philosopher Pliny the Elder also spoke of them. He was well known for traveling widely and writing on various natural and geographic phenomena, as well as strange and fantastical creatures or peoples, and among these were the headless men of Africa, which he called the Blemmyae. He would write in his Natural History that they have “no heads, their mouths and eyes being seated in their breasts," and further claimed that it was a nomadic tribe that wandered the Nile system. Pliny the Elder described them as war-like savages that the natives of the region avoided at all costs. His accounts of the mysterious creatures imply that he thought they were very real, and they are mentioned right along other more mundane writings on the natural history of the region and its animals and peoples. Interestingly, Pliny the Elder would also claim that a similar tribe of headless men lived in India. In later years, in 1211 AD the explorer Fermes wrote of a tribe of “people without heads, and of a golden colour, measuring 12 feet tall and 7 feet wide, living on an isle in the River Brisone (in Ethiopia)” and the stories continued. In 1349 the German Catholic scholar and writer Conrad of Megenberg wrote of “people without heads, shaggy all over the body, with coarse hair like wild animals” in his Buch der Natur. The book The Travels of Sir John Mandeville, a travel memoir which first circulated between 1357 and 1371, also mentions “ugly folk of foul stature and of cursed kind that have no heads. And their eyes be in their shoulders,” in this case living somewhere in Asia.

Such astounding tales made he headless men very popular all over Europe, sparking the imagination of explorers and regular folk alike, and they began appearing on maps throughout the Middle ages, the most prominent of these being the 1513 map of the Ottoman admiral and cartographer Piri Reis, which depicted a them near Brazil. Interestingly, in this case they are described as being smaller and more mellow than their African brethren, with a caption that reads, “These wild beasts attain a length of seven spans [5′ 3″]. Between their eyes there is a distance of only one span [9″]. Yet it is said, they are harmless souls.” Other maps placed them in India, but most common was their depictions in Africa, especially Ethiopia, and the artistic representations of them frequently featured a type with eyes in the shoulders rather in the chest.

Reports of the headless men continued right on into the Age of Discovery. In around 1589, the English writer Richard Hakluyt described a voyage by John Lok to Guinea, during which he encountered “people without heads” in the region’s thick jungles, and they were reported from South America as well. One of the more well-known accounts from the era comes from none other than the legendary explorer Sir Walter Raleigh. During a voyage along the Caura River of Guiana in 1595, he claimed to have heard of a tribe of headless people living along the river bank, and he would describe them in his Discovery of Guiana as follows:

Along the Caora river, there lived a nation of people whose heads appear not above their shoulders which, though it may be thought a mere fable, yet for mine own part I am resolved it is true because every child in the provinces of Arromaia and Canuri affirm the same. They are called Ewaipanoma. They are reported to have their eyes in their shoulders and their mouths in the middle of their breasts, and that a long train of hair groweth backward between their shoulders. 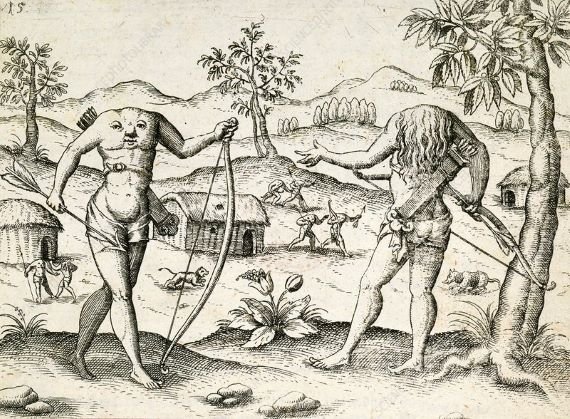 This account would lead to the creatures being featured on many maps of the New World, and although the discoveries of new, faraway lands have always brought with them tales of fantastic beasts, we are left to wonder just why stories of these headless men are so persistent throughout history and why they are typically mentioned matter-of-factly as real living creatures. While the idea of a head in the middle of the chest seems absurd, there have been theories about what could have spawned the legends, ranging from the mundane to the exotic and far-out. One idea is that this was simply due to seeing individuals who may have had a birth defect that caused their shoulders to sweep up much higher than usual, or that some tribes may have even altered their bodies like this on purpose. Another idea is that explorers were encountering an exotic native garb or headdresses, or even shields with faces painted on them, that the outsiders misidentified as the individual being headless. It could have also been a particular war stance that they had, with the head tucked into the chest, which when mixed with the exotic nature of these people might have been seen as a face in the chest. Still other more outlandish theories are that these were some sort of hairy hominid, or Bigfoot-like creatures or that they were even aliens or interdimensional interlopers. All we really know for sure is that the mysterious headless tribes have been consistently reported throughout history, and whether they were ever real in any sense or not, they are an indelible feature on the landscape of early exploration and adventure.

Roswell: Four Lesser Known Scenarios for What Might Have Happened