Located in the neighborhood of Old Donation Farm, in Virginia Beach, Virginia, is a quaint, historical brick house now called the Ferry Plantation House, which while very charming might be easy to miss among all of the historical buildings in the area, but this piece of land has a long history. The land where the house stands once belonged to the Chesepian Indians up until the early 1600s, after which it became a prosperous plantation and in 1642 it became an important stop along a new ferry service along the Lynnhaven River. The spot was the location of the Princess Anne County courthouse, after which in 1751 the site was used to build an opulent mansion for a wealthy landowner named William Walke, earning the house the name “Walke Mansion.” This mansion stood until a fire destroyed it in 1828, and it would then be rebuilt using salvaged bricks from the fire as a residence for Charles Fleming McIntosh, who was the Captain of the Confederate Navy’s CSS Louisiana, and it is this house that was expanded over the years and is the structure that still stands today. It has also just happened to go on to be known as a very haunted place that is the destination of ghost hunters from all across the country, and it is a place tainted by talk of darkness, witchcraft, and all kinds of supernatural weirdness.

During its early history one of the most famous and tragic stories surrounding the location dates back to its days as a courthouse. In the 1700s, a local farmer and midwife by the name of Grace White Sherwood made quite a name for herself in Princess Anne County as a healer and herbalist, attracting customers from all over the region, who came for her uncanny knack to be able to cure all manner of illnesses and woes. Of course considering the era, there was a fine line between herbalist and witch, and at some point rumors began to spread that Sherwood was actually practicing black magic. She would be blamed for all manner of misfortune in the area, from bad crops to dead livestock, to lost fortunes or love, but it was one accusation in particular that would seal her fate.

In 1706, a local woman by the name of Elizabeth Hill lost her child to a miscarriage, and wasted no time in blaming Sherwood for what had happened. Sherwood was arrested on the word of Hill alone, and subjected to a test to see if she was really a witch or not. At the time, a popular method of doing this was what was a trial by water, often referred to as “ducking.” It was believed that clean water repelled witches, and so it was reasoned that if a witch were to be thrown into water such as a lake or river, they would sink if they were innocent, but float if they were witches, because the water was rejecting them, see. Yes, it is a very medieval sounding trial, and no, Sherwood did not sink. As a result, she was sent to languish at the courthouse at the Ferry plantation for nearly a decade before being released and dying at her farm. Sherwood, who would come to be known as “The Witch of Pungo,” would be found innocent posthumously hundreds of years later, and also attract a range of tales of the supernatural.

One tale that began circulating shortly after she died was that it was said that she had died as she lay down beside a fireplace in the company of her sons. Upon her last gasp, a strong gust of wind is said to have blown down from the chimney, creating a swirling cloud of soot. When this cloud subsided, the two coughing, wheezing sons were astonished to see that the body of their mother was gone, and that there was a series of cloven hoof prints left in the ashes where she had been, those of the Devil himself. Another popular urban legend that sprang up is connected to a gnarled, ancient tree on the Ferry plantation, which every full moon supposedly attracts black cats and the specter of Sherwood herself. Indeed, Sherwood's ghost has long been reported lurking about the Ferry plantation house and walking along the nearby river, perhaps tethered here by her rage at having been wrongly confined here for nearly a decade.

If the ghost of the Witch of Pungo really does lurk about here, she is not alone. The house has long been associated with various intense paranormal activity, which really gained wide attention during a period in which it sat abandoned from 1986 to 1996. It was often said that spectral figures could be seen wandering about the grounds, or that mysterious lights could be seen in the house itself, and caretakers reported all manner of strange phenomena from here, in particular ghostly scenes from history that would play out as if a movie being projected onto a screen. Popular stories that surrounded the property were that it had all been built on an Indian burial ground or that there had been murders carried out there. Even after the house was renovated and turned into a museum the ghostly activity continued, and in fact, it has been said that the Ferry Plantation house is home to at least eleven different spirits. 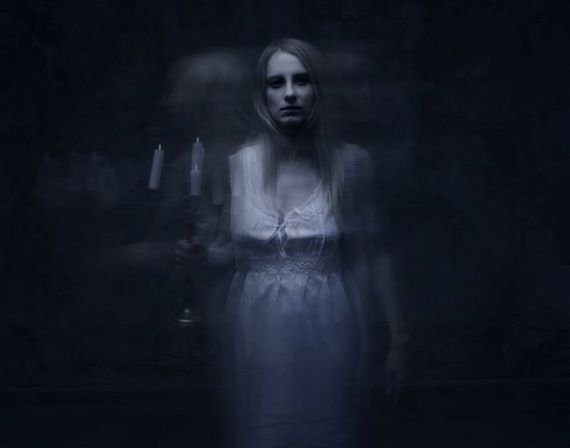 Besides the ghost of Sherwood, one of the more commonly encountered spirits here is that of a former slave of the plantation, called Henry, who is said to have lived his entire life there, even choosing to stay after he had been freed. Henry will reportedly come up from the basement, cross the room, and kneel in front of the west wall for a time before getting up and going back down to the basement. It would in later years be found that there had once been a fireplace where the wall stands, making it seem as if he was coming from the cold basement to warm himself up by the fire before getting back to work. It is said that he has no awareness of observers, and mindlessly does that same routine every time, almost as if he is stuck in an eternal loop and doomed to perform the same task over and over again. Henry is often said to be an example of “residual place memory,” in which a scene from history is etched onto a location like images on a tape.

Other ghosts at the plantation supposedly include two children, Sally Rebecca Walke, who mourns the death of her fiancé, that of a fallen soldier, a mysterious lady in white, thought to be the spirit of a woman who died falling down the stairs, a victim of a ferry accident nearby, and an artist named Thomas Williamson, who was married to a Walke and can apparently be seen painting at the top of the stairs. There is also the ghost of a sad looking pregnant woman dressed in blue, thought to be the wife of Captain Charles Fleming McIntosh, as well as that of McIntosh himself, other less definable apparitions such as a shadowy entity with a tail, and other miscellaneous spooks. It is said that the oldest section, the southeast wing, has the most intense paranormal activity, but ghosts and strange phenomena have been reported from all over the estate and its grounds. Of course this has made it a haven for paranormal researchers and ghost hunters, who tend to label it as easily the most haunted place in the state, if not one of the most haunted places in the entire country.

Presently the Ferry Plantation house, which sits on the US National Register of Historic Places, serves as a museum and holds many events, such as a summer camp for kids to learn about life in the 18th and 19th centuries, a reenactment of Sherwood’s trial, and of course regular ghost walks, including one held during the Halloween season called "The Stroll of Lost Souls.” It is certainly a place steeped in haunted lore, and whether an of it is true or not, it is still considered to be one of the more intensely haunted places in the state, if not the country.