The evening of November 25, 1979 had been a typically quiet one for the sheriff’s office at Westport, in the U.S. state of Washington. In fact, in this rural area most nights nothing much ever really happened at all, so it was a surprise when the phones began ringing off their hooks with calls from various residents in the nearby Elk River region with a very strange story to tell, and as the witness reports were compiled, they painted a bizarre picture, indeed. This would be the beginning of a very strange case of an apparent UFO crashing down to earth and launching much talk of aliens, mysterious military forces, and government cover-ups.

The people calling in all explained a mass sighting of a very anomalous incident in the sky, and before long others were coming forward with their own reports. One witness claimed to have seen what looked like a “plane with one side on fire,” another saw a very bright green flash in the sky, still another saw an "unknown aircraft" with windows illuminated with a bright blue light and which seemed to have lost power and was dropping. Yet another witness would explain that she had seen a craft with “bright like mercury lights,” that was silently falling towards the earth, and others also reported a fiery ball in the sky. In most of these cases the witnesses agreed that it was no normal airplane or known aircraft, that it was somehow without power or control, and that it was in the midst of crashing, with some people even reporting having seen some sort of explosion. This was all alarming enough that, even though no plane had been reported missing, a search was carried out by the sheriff’s office and the Civil Air Patrol but they turned up no sign of any sort of crash.

The sightings made the rounds in the news at the time, but then the whole thing then sort of faded away and was forgotten. That is, until 1986, when it came to the attention of a James Clarkson, who at the time was chief investigator for the Washington state chapter of the Mutual UFO Network (MUFON). Upon stumbling across several articles that had run back in 1979 in The Daily World, Clarkson was amazed that something as phenomenal as what had been splashed onto headlines as a UFO crash could have just so completely fallen off the radar. He had never even heard of it, despite the fact that he was an important member of one of the biggest UFO research organizations in the world, and also that he had unbelievably been a rookie cop with the Aberdeen Police Department, right next door to Elk River at the time of the incident. How could this be? Not satisfied with some old news reports, Clarkson decided to head straight to the source, venturing out to Elk River for what was to be one of the most memorable cases he had ever had before or since. Clarkson quickly found out that, although the case had been forgotten in the news, the people around Elk River had not forgotten at all. Many residents remembered very well, and Clarkson would say of this:

It was seven years after the event, but it was still a big topic of discussion. I kept hearing it over and over in one version or another. Everyone seemed to know about the Elk River crash.

Clarkson would begin countless interviews with any witness he could find, uncovering some rather curious details. For instance, many of the witnesses agreed that the object had gone down in a remote area of wetlands and heavy forest called the Elk River Drainage Area. There were also quite a few residents who claimed that there had been a military presence in the area of the crash nearly immediately. One person he talked to, a man named Gordon Graham, claimed that the day after the supposed crash he had driven out to see if he could find something, but was turned away at a military checkpoint that had been set up. Graham made it very clear that the military presence was significant, that they were all armed, and they had been rather threatening in their ominous warning to turn back. Another witness corroborated this, with a logger who said that he had not even been able to go to work at his usual place because of soldiers barricading the area. Yet another resident named Henry Harnden actually claimed to have been menaced and chased from the area by what he called “a special division from Georgia,” and there was also a police officer who claimed to have seen large military trucks and jeeps making their way to the site of the supposed crash, as well as several people who claimed that there had been black military cargo helicopters in the area in the days after the incident. It may come as no surprise to anyone who has even a passing knowledge of similar cases that the military was completely evasive about it all. Clarkson would say of all of this:

What I tend to believe is that most of the people got most of it right. And if they did, then we have a military cover up. If something came down up there, it’s either a missile or an experimental aircraft that belongs to us or another country. Or it’s an extra-terrestrial vehicle. I’ve never had anybody say, ‘No the military wasn’t there.’ The military haven’t denied it.

On top of all of this, Clarkson uncovered another, secondary UFO report that allegedly happened on the night after the first. The witness explained that been driving past the near the John’s River Lodge when his attention was captured by a group of people standing by the side of the road gazing up at the sky in apparent wonder. It was enough to convince him to pull over, and when he did he told Clarkson that he had seen “a strange spectacle of lights,” including one large one being followed by around a half dozen smaller ones, which would occasionally fall into formation to orbit the larger one before falling back into a line behind it. After some time, the smaller lights apparently sped off at breathtaking speed in all directions, while the large one headed out towards the ocean. It is unknown what connection this had to the sightings the night before, but Clarkson likes to call it “the ‘other’ search party.” 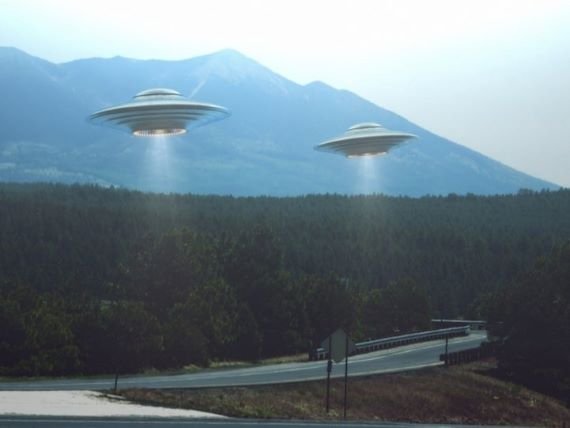 After spending countless hours thoroughly investigating the case and having numerous requests under the Freedom of Information Act turn up nothing, Clarkson eventually came to the frustrating conclusion that, although he believed something came down at Elk River that evening, too much time has passed for any conclusive evidence for what that could have been. He believes that people did see something very strange in the sky that night, and there was a removal of something out there by the military and efforts made to obfuscate what they were doing and suppress the truth, but he stops short of definitely saying it was an alien spacecraft, saying:

Don’t assume aliens or little green men. A UFO is no more, no less than what the acronym says. It’s something in the sky that because of shape or color, aerodynamic characteristics or maneuvering appears to be an unknown. It doesn’t have an obvious explanation. It’s an unidentified flying object.

In the end he would be forced to admit that it was a mystery that will probably never be solved, although he remains hopeful when he says, “Although many years have gone by. I haven’t totally given up the notion that there might be someone out there who has a key piece of information.” In the meantime, we are left to wonder. What happened out at Elk River back in 1979? Why all of the military presence and the reports of something odd in the sky? What does it all mean? We may never know for sure, but it certainly is intriguing, to say the least.