The Strange Tale of the Wizard of Japan

Back through Japanese history one can find many tales and stories of mysterious individuals similar to wizards or sorcerers in the West, and among these the most well-known are what were called the onymoji, which directly translates to “those who study yin and yang.” Through the use of the practice of onmyodo, or “the path of yin and yang,” there were numerous powers and abilities attributed to such wizards, including being able to divine the future through astrology, mind reading, clairvoyance, and the ability to control spirits for various ends or to exorcise them. The onymoji were greatly respected and feared, often fixtures of the Imperial court as advisors, and one of the most powerful and famous of all was the man called Abe no Seimei, or Seimei Abe, a Japanese wizard who was among the most powerful to have ever lived, and has managed to transcend real history to become steeped in legend and myth.

Similar to the wizard Merlin of the West, the life of Abe no Seimei is so infused with amazing tales and legends that it is often difficult to separate fact from fiction. It is known that he was indeed a real person born in the year 921 AD, and that he was a descendant of the great poet Abe no Nakamaro, although even his birth is pervaded with legend. One of the more popular of these is that his father was an onmyoji as well, and his mother was a kitsune, or a shape changing fox spirit, which is why he would begin to show great magical prowess from a young age. It is said that even as a child Seimei manifested potent supernatural abilities, such as the ability to see spirits and to talk to animals. He was easily able to see his mother’s true form through her human disguise, and impressively he could supposedly control devils, called oni, as well as other spirits by the age of 5, able to compel them to do his bidding and make them into his servant spirits, called shikigami.

In later years he studied astrology and honed his skills in onmyodo, eventually going on to become the Emperor’s official Court Onmyoji and Astrologer, which was an actual position at the time, taking the place of his own teacher, Kamo no Yasunori. The position typically entailed performing various ceremonies and rituals, as well as divining the future, casting spells for all manner of things, banishing evil spirits, bringing good fortune, making astrological readings, and guiding the court in a prosperous direction. It was during his days with the court that Seimei’s reputation as a powerful wizard really took off. He was well-known for his ability to find lost or stolen items, as well as to divine the gender of babies, and he was an accomplished exorcist and unrivalled astrologer, able to predict future events with uncanny accuracy. He was also extremely gifted with the power of geomancy, which is a divination technique that involves interpreting markings on the ground or the patterns formed by tossed handfuls of soil, rocks, or sand. During this time, he supposedly averted many disasters, and wrote many books on divination and fortune telling, but although he was well-respected, he was not without his enemies.

One of Abe no Seimei’s main nemeses was another wizard by the name of Chitoku Hōshi, and the tales of their rivalry are legendary. One of the most famous stories is the time that Chitoku used magic to disguise himself and visit Abe no Seimei’s home under the guise of a traveler, along with two shikigami spirits also disguised as travelers, with the aim of testing out whether he was really as powerful as everyone said. Abe no Seimei immediately saw through the magical disguise, and could see the two shikigami spirits for what they really were, but did not let on that he did, instead rather amused and curious as to where this was heading. Chitoku took on the ruse of imploring Abe no Seimei to teach him the ways of magic, to which the Imperial wizard agreed, telling him to come back the following day to start his training but to leave his servants there. As soon as Chitoku was gone, Seimei banished the two spirits, which came as a surprise when Chitoku arrived the following day to see them nowhere in sight. It is said that Chitoku then realized that he had underestimated Abe no Seimei, and bowed in deep respect, begging to be forgiven.

Another rival was the wizard called Ashiya Dōman, an older and wiser mage who saw Seimei as insolent, and it is said that the two would frequently have magical battles with each other. One of the more popular stories involving the two wizards clashing was when Dōman challenged Seimei to tell him what was inside a closed box in front of a full court. Dōman had secretly put fifteen oranges into the box, but Seimei used his powers to change the oranges into rats. When he told Dōman that there were 15 rats in the box, the rival sorcerer laughed and opened the box to reveal what he thought would be oranges, but which was actually a pile of squirming rats. In another famous story the two met before a large audience for a magical duel. Dōman allegedly turned sand into sparrows, which Seimei turned back into sand with a wave of his hand. Seimei then purportedly conjured up the image of a dragon in the sky and caused a cloud to form that soaked the area with rain. Dōman was unable to dispel Seimei’s potent magic, indeed making the weather progressively worse the harder he tried, and so Seimei was judged to be the unanimous winner. 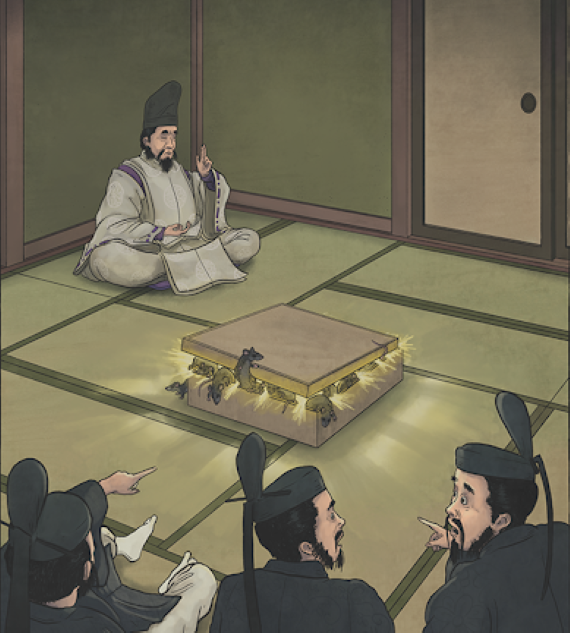 Defeated and humiliated, beaten again and again by his younger rival, Dōman was constantly plotting against him. He allegedly used his magic to seduce Seimei’s wife into showing him her husband’s secret spell books, and this would be the beginning of the end for Abe no Seimei. When Dōman confronted him and gloated that he had stolen all of his secrets, Seimei was so shocked that he had been betrayed by his own wife that he allegedly offered his throat to Dōman to cut. Dōman obliged and killed him right there on the spot. However, according to the legends, a Chinese wizard by the name of Saint Hokudō, who had been one of Seimei's mentors, retrieved Abe no Seimei’s bones and brought him back to life, with the two planning to get revenge on Dōman, who also had happened to have married Seimei’s wife to add insult to injury. To this end, Hokudō visited Seimei’s former home, where the evil wizard was now living with the ex-wife, and asked if Seimei was home. When he heard that the wizard had been dead for some time, he feigned surprise and said that he had just seen Seimei the previous day. In response, Dōman stated that if he could prove that he was still alive then he would offer his own throat to be cut. Out popped Seimei, much to the shock of Dōman and his ex-wife, and off came his head, with the two also killing the wife for good measure. Brutal.

After that Seimei would live a long and prosperous life, allegedly immune to sickness and disease, before dying in 1005 of old age. After his death he was immortalized by the Emperor Ichijou with a shrine dedicated to him, the Seimei Shrine, located in Kyoto, which is a popular attraction to this day. Indeed, after his death many worshipped Abe no Seimei as a god, and he has gone on to feature in countless literary works, films, stage performances, and even manga, a character who had become larger than life, his real feats indistinguishable from his more spectacular mythological ones. We are left with a fascinating and mysterious historical figure who has become entrenched in legend and lore, and whether Abe no Seimei was ever even able to do half of what is claimed, he is still an amazing feature upon the landscape of Japanese history and myth.