The Time Reagan and Gorbachev Struck an Alliance Against Alien Invaders

The mid-1980s were a tense time in the world, with the Cold War in full swing and two heavily armed nuclear powers, the United States and the Soviet Union, at odds with each other. It was a time of proxy wars being fought and the two powers constantly saber rattling, an era of frequent brinksmanship, with nuclear missiles aimed at each other and the very existence of the world hanging in the balance, watching with fear what these two massive countries would do. In many ways it was akin to a standoff between two gunslingers, each staring the other one down, hand at the holster, waiting for the other to make a move, the slightest movement likely to cause the other to fire. Both countries had massive nuclear arsenals, which had been growing all of the time in a seemingly never-ending cycle of one-upmanship, and this was one of the reasons for Geneva Summit of 1985, held in the neutral territory of Geneva, Switzerland. Among the topics they would discuss were controlling the arms race, improving relationships, and whether or not they would team up if aliens ever invaded Earth. Wait, what?

The meeting was originally meant to discuss options for cutting down the number of nukes and smooth over diplomatic relations related to the ongoing arms race, but it was turning out to mostly serve as a venue for both powers to flex and posture on the stage of public opinion. The Geneva Summit had been tense going even during the planning stages, as the two nations had difficulty seeing eye to eye on anything or establishing a dialogue at all, really, not helped by the fact that the U.S. chose the months ahead of the meeting to unveil their plans to test the Strategic Defense Initiative. Also known popularly as Star Wars, it was a space based proposed missile defense system designed to protect the United States from attack by ballistic strategic nuclear weapons, both launched from land or submarines, and it really stirred the hornets’ nest as far as the Soviets were concerned, making things that much more abrasive and antagonistic when talks at the summit actually began. When they met in Geneva, both superpowers engaged in a dance of demands and proposals met with rebuffs and counter demands, with both seeming to have different agendas. For instance, the Soviets wanted to halve the number of nuclear weapons, while the U.S. seemed more interested in making sure that both sides did not gain a first-strike advantage. The Soviets wanted the Star Wars system halted, whereas the U.S. was very interested in protecting their right to have defensive systems. The Soviets suggested a unilateral moratorium on underground nuclear tests, but the U.S. refused to join it. It seemed to be going nowhere, as it was very apparent that neither one of the superpowers trusted the other at all.

Among all of this, one of the main attractions of the Geneva Summit was that it was the first time for then American president Ronald Reagan to meet Soviet General Secretary Mikhail Gorbachev face to face. As all eyes around the world watched, the two Cold War leaders met at the picturesque chateau Maison de Saussure, and it was just about as awkward as one might expect. One the first day of the two-day meeting, Reagan told Gorbachev that the U.S. desired peace above all else, to which Gorbachev retorted that the U.S. government was intentionally keeping its citizens tense and distrustful of the Soviets. Indeed, Gorbachev complained that one of their main problems was this distrust and paranoia. And around and around it went, going a half an hour over schedule. Reagan accused the Soviets of being overly aggressive, and Gorbachev retorted that the Americans were fear-mongers and overreacting. They also clashed about the arms race, the Strategic Defense Initiative and various other issues, with Reagan later saying that Gorbachev was belligerent and Gorbachev describing Reagan as “unyielding.” Just about the only thing they could agree on was that they should meet again and continue the talks. Yet there was apparently something else they agreed on as well.

At one point during the negotiations, Reagan and Gorbachev stopped the meeting to take a break and have a walk together. It was frustrating for reporters and everyone watching from home, because it turned out to be a very private walk, with only their interpreters allowed to follow, and with not even Reagan’s Secretary of State George Shultz allowed to go with them. They went for their walk, came back, and for years there was much debate and discussion about what the two had talked about during that time. It was not until 2009 when both Schultz and Gorbachev participated in an interview with Charlie Rose and the subject came up. Shultz described how the two had suddenly taken a break to go to “some cabin on Lake Geneva where there was a fire in a fireplace and you sat down there.” At that point Gorbachev excitedly jumped in to tell of what they had talked about, and that was apparently what the two countries would do if they were attacked by aliens. Gorbachev said:

From the fireside house, President Reagan suddenly said to me, ‘What would you do if the United States were suddenly attacked by someone from outer space? Would you help us?’ I said, ‘No doubt about it.’ He said, ‘We too.’ So that’s interesting. I'm sorry for having interrupted you, but it was an interesting moment. 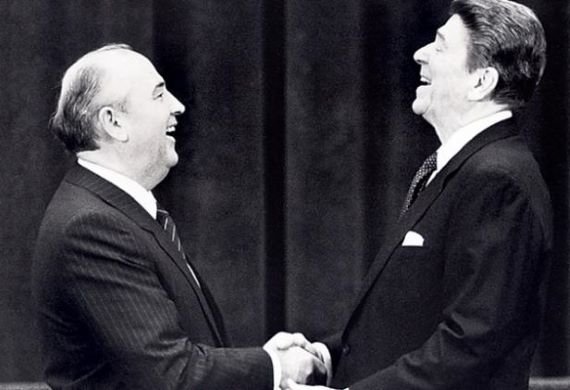 At the time there was a lot of laughter in the studio, and one might have even gotten the impression that Gorbachev had just made it up on the spot as a joke, if it weren’t for the fact that Reagan would later corroborate it and confirm that it was true. He even related it at a speech to the United Nations a few years later. It is unclear just how serious Reagan was when he asked this, whether it was an honest question or merely he, being a total science fiction geek, desperately trying to find some footing with the Soviet leader during tense exchanges by approaching it through a pop culture lens. Yet there has been much debate that perhaps Reagan was not only being sincere, but that it suggests he had inside knowledge that an alien attack was an actual possible threat. Writer Alex Hollings, at the site SOFREP has said of this:

It seems reasonable to assume that Reagan was using the concept of an alien invasion to point out how even the enemy nations had a mutual desire to see the world survive — a concern that seems appropriate when working to avert a nuclear war. However, in the minds of some, that private stroll in 1985 remains as among the best evidence to date that the United States government was aware of a potential threat posed by the presence of UFOs or alien life. Whether or not Reagan was secretly aware of the presence of UFOs, or if he was simply using popular culture to find common ground with other world leaders, will remain the subject of debate among those with interests in either explanation, but regardless of any potentially hidden intent, it’s nice to know that even the United States and Soviet Union could have put their tensions on hold long enough to fight for the sake of the planet.

There has also been a lot of talk that the two leaders delved into this much more than they let on, or that they actually put plans into place. This little meeting has managed to attract a great deal of attention, despite the fact that it was a seemingly tiny little exchange that likely meant nothing. Yet, we are left to wonder. Why did Reagan bring this up? What did it mean, if anything? Did he know anything, or was this just banter coming from a science fiction aficionado trying to break the ice with a formidable rival? We will probably never know for sure, but it is certainly an odd little exchange from a turbulent time in history.