These Brown Dwarf Stars Have Stripes (But Are They Forever?)

Brown dwarf stars have been getting some attention lately as astronomers debate whether these small celestial bodies are actually stars (they’re often referred to as failed stars) or large gas giant planets like our own Jupiter. Those supporting the brown-dwarfs-are-gas-giant-planets theory got a boost recently with new research showing that brown dwarfs show evidence of stripes, bands and polar storms similar to those seen on Jupiter. Talk of stars, stipes and bands brings to mind the famous march written and composed by John Philip Sousa in 1896. was he making a subtle comment about brown dwarfs when he wrote "Stars and Stripes Forever"? 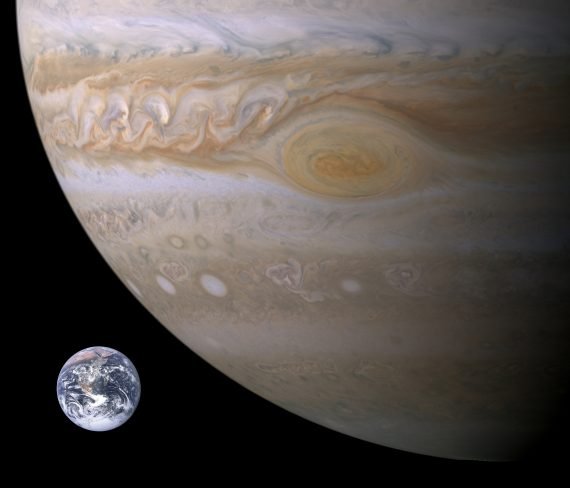 Planetary scientist Dániel Apai from the University of Arizona led the research, published in The Astrophysical Journal, on the binary brown dwarf Luhman 16 system located in the
southern constellation Vela about 6.5 light-years from the Sun, making them the closest-known brown dwarfs. In an attempt to resolve the failed-star-or-gas-planet debate, the team used brightness measurements from NASA's TESS (Transiting Exoplanet Survey Satellite) space telescope to identify high-speed, global winds blowing across Luhman 16 A and B, giving them stripes and bands similar to Jupiter’s. The stripes run parallel to their equators and it appears their function is to redistribute heat emerging from the brown dwarfs' hot interiors. Making the case for them being gas giants even stronger, the researchers also found polar vortices.

"Knowing how the winds blow and redistribute heat in one of the best-studied and closest brown dwarfs helps us to understand the climates, temperature extremes and evolution of brown dwarfs in general."

Luhman 16 A is about 34 times more massive than Jupiter, while Luhman 16 B is 28 times more massive and about 1,500 degrees F hotter. While TESS didn’t give the astronomers a true visual image of the stripes on the brown dwarfs, Apai explained in the press release that advanced algorithms developed by them showed brightness changes as the two brown dwarfs rotated, revealing the existence of the stripes.

So, does this discovery resolve the brown-dwarfs-are-failed-stars-or-gas-giant-planets debate? Not really. Apai plans to use the brightness algorithm to further study and map the atmospheres of more brown dwarfs and giant extrasolar planets, looking for additional evidence of stripes, clouds, storm systems and circulation zones on both.

Could Sousa have predicted the answer with “Stars and Stripes Forever”? He wrote the march after hearing of the death of the manager of his band. The march was immediately popular and in 1987 was officially adopted as the national march of the United States of America. However, in early 20th century theaters and circuses, the song was called "the Disaster March" because house bands only played it as a code to signal an emergency notifying employees to evacuate the facility without causing a panic. It was played during the Hartford, Connecticut, circus fire on July 6, 1944, when at least 168 people were killed at a performance where attendance was estimated to be about 8,000. The cause of the fire was either a lit cigarette or arson, but its spread was due to paraffin coating the tent. Since it wasn’t gas, that might mean Sousa would favor the brown-dwarf-as-star theory, especially since his song was played at disasters or ‘failures’.

It’s a great song and a great debate, whether they’re linked or not. Let’s hope we don’t hear it played at any disasters in 2021.

The Mysterious Death of Magdalena Zuk