Welcome to the Most Haunted Hotel Room in America

Lying out in Chattanooga, Tennessee, in the United States, is the historic, regal Read House Hotel. Listed on the National Register of Historic Places and known for its quaint old-fashioned Georgian style architecture, it is a delightful little gem that has over the years attracted a list of famous guests including Oprah Winfrey, Gary Cooper, Winston Churchill, Bing Crosby, Bob Hope, and even the notorious gangster Al Capone. It is mostly considered a classy and elegant piece of history, but it also has more than its share of ghostly phenomena, and it has the distinction of having what is considered to be one of the most haunted hotel rooms there is.

The Read House Hotel was originally the Old Crutchfield House, which was built in the mid 1800s during the area’s bustling years as a major railway hub, and did brisk business serving the many people passing through. During the Civil War it served as both an inn and hospital for injured Union soldiers, losing a bit of its luster. A fire destroyed it in 1867, but it would be rebuilt by new owner, businessman John T. Read, as the Read House Hotel, which opened in 1872. Read had high aspirations for his new venture, seeking to build the finest and most opulent hotel the city of Chattanooga had ever seen, sparing no expense in its creation. With its marble inlaid floors, sumptuous carved and gilded mahogany woodwork, and sweeping columns and arches it worked, and soon the Read House Hotel was seen as the pinnacle of luxury, attracting high class wealthy clientele from all over the country. This would continue until in 1875, when much of the hotel was badly damaged by a flood and it feel into disrepair, eventually mostly rebuilt and renovated in 1926 into the 10-story building we see today. There are plenty of rooms here, but when walking through these halls there is one room in particular that has attracted much attention and that is its infamous Room 311.

The room itself doesn’t look particularly special, resembling the many other rooms of the hotel with its rustic charm and old-fashioned décor, but this particular room is supposedly steeped in a dark, bloody history. It is said that in the 1920s, a young woman named Annalisa Netherly stayed here with her lover, but it was to be far from a romantic getaway. According to the tale, the lover became jealous of Annalisa’s flirtatious ways, they argued, one thing led to another, and she ended up murdered, decapitated, and dumped in the room’s bathtub, where she was later found by shocked staff. It was not long after this that the room quickly gained a reputation for being remarkably haunted. Guests would complain of all manner of paranormal phenomena in the room, including flickering lights, doors that open by themselves, the toilet flushing when no one is there, the faucet turning on by itself, the key to the room refusing to work, cold chills, the feeling of being watched, in more modern times the TV changing channels on its own, shadowy figures appearing in the mirror, and others.

Most frightening of all is the apparition of a young woman, presumably Annalisa, who will sit on the bed or wander around the room, but who will also sometimes display aggressive behavior, especially towards men. One very famous story comes from the time Al Capone stayed here while on his way to his federal trial for tax evasion. The room was even fitted with bars to prevent him from escaping, which remained for years after, but most intriguing is that it is said that Annalisa was so offended by his cigar smoke that she acted up during the time. Reports from the room have continued on into the modern day, and one report comes from a “Tangelo99” on the site Trip Advisor, who says:

We stayed at the hotel 9 years ago with no knowledge of any ghost stories. There were 4 of us in the room including my daughter who was 13 at the time. In the morning she said that she woke up in the night and saw a shadow of someone standing by the door but then it was gone. She was thinking it was someone getting up to go to the bathroom and went back to sleep. Another person in our party said that they also woke up and thought they saw someone by the bathroom and thought the same thing but then it was gone and everyone was in their beds. Didn't give it much thought. My daughter all day long while sightseeing couldn't stop thinking about it. I told her when we get back to the hotel we will ask if anyone has reported strange happenings confident, they would say no and put her mind at ease. When we got back, we asked the front desk and to my astonishment, they said yes, they received many reports and handed me a piece of paper with the story about room 311. We stayed another night with nothing occurring but it left all of us wondering!

Another report comes from the same site from a “magic9s9,” who says at the time her son was staying in the notorious room. She says:

My son stayed there this week for a conference in Chattanooga. While he was there, I looked up the hotel and found out about the haunted stories. So I texted him and told him there were staying in a haunted hotel. So being the curious teenager he is, he explored, asked questions and such. He never believed in that stuff but said he was walking the halls asking for something to happen, was calling the girl ghost fake and such. He and his roommates were in bed watching TV later and he got pinched. Totally freaked him out. They there was a knock on the door at 10:30pm. They answered pretty quickly and there was nobody around. He said there was no way someone could have knocked on their door and ran, they would have seen them or at least heard another guest room door shut. He was defiantly weirded out about the whole thing. He didn't even tell us about it until he got home.

A couple by the name of Tripp and Shiba Gorman from Atlanta came to stay at the hotel from Atlanta, and were among the first to be allowed to stay in the room after its renovation in 2019. They said that they immediately got bad vibes from the room, but then Shiba started seeing things and having some unsettling experiences such as the drawers opening on their own, and she says of their stay:

It was just very disturbing. I did get a very heavy, kind of like a sad feeling, from this place. I felt something grabbing my wrist and then it happened and stopped. I just kept seeing things move in the corner of my eye. I stop and I look at it and I'm like wait. And I run back in, and I'm like 'baby are you messing with me?' I was shaking for about 10 minutes. 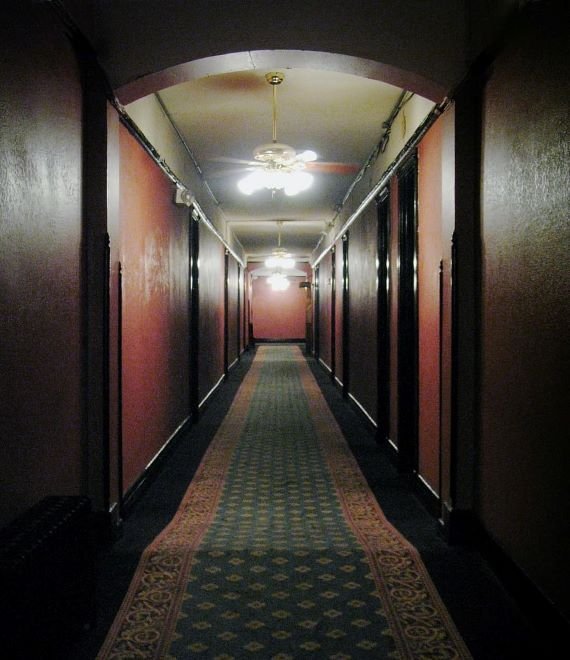 The hotel has been renovated several times in modern times, including in 2004 and in 2019, but although other rooms have been outfitted to be more modern, Room 311 has intentionally been modified to be eerily as it has always been, with the TV taken out and making it as authentic to the 1920s as possible in an effort to appease the resident ghost. Hotel general manager Ken Merkel has said of this decision:

After reading all accounts of haunted Room 311, we knew the best thing to do was to restore the room to make Annalisa Netherly comfortable with no modern amenities. And we are excited to welcome new guests to share her room. Room 311 looks and feels like Annalisa’s room in the 1920s. There is an AM radio that does not work, a vintage clawfoot tub, an original pull chain toilet, antique furnishings, and distressed hardwood floors just like it would have been in the early twentieth century and no television.

To this day Room 311 is mostly considered off limits, only very occasionally offered to guests for special occasions, but one can still see it through the ghost tours run by the hotel. The renovations don't seem to have stopped the tales of weirdness coming from this room, and it has remained a famous location for ghost hunters and paranormal investigators. Why is this ghostly phenomena so firmly tethered to this room? What does this spirit want? Is any of this real at all or is it just a spooky urban legend? Only one way to find out, and that is to book a night there to see for yourself.

The Wendigo: The Most Dangerous Monster of All?