The oldest rock painting so far discovered in Australia dates back more than 17,000 years and was of a life-size kangaroo. Found in the Kimberley region of Western Australia, the two-meter-long painting was found on the sloping ceiling of an ancient rock shelter.

A team of experts from the University of Melbourne were able to determine the age of the kangaroo painting by radiocarbon dating mud wasp nests that were found inside of the rock shelter. Their results determined that it is the oldest in-situ painting (in its original place) and the oldest painting still present on the wall of a rock shelter ever found in Australia. 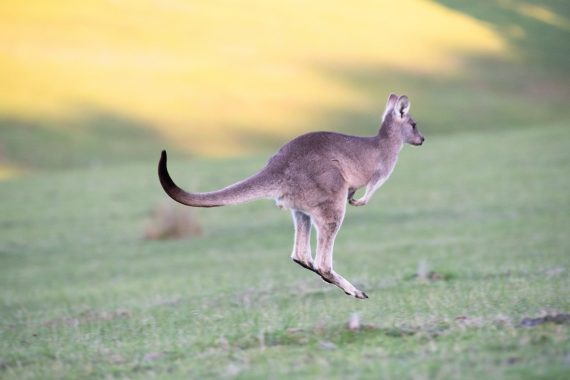 Researchers studied the kangaroo painting as well as other images close to it in order to determine in which order they were created. The kangaroo is an example of an old style of painting called Irregular Infill Animal/Naturalistic Period that began in approximately 28000 BC and depicted many life-size animals.

Dr. Finch detailed how important this discovery was, “This is a significant find as through these initial estimates, we can understand something of the world these ancient artists lived in,” adding, “We can never know what was in the mind of the artist when he/she painted this piece of work more than 600 generations ago, but we do know that the Naturalistic period extended back into the Last Ice Age.”

Dr. Sven Ouzman from the University Western Australia's School of Social Sciences as well as one of the project's chief investigators, stated how the painting could provide more information in regards to understanding the cultural history of Indigenous people, “This iconic kangaroo image is visually similar to rock paintings from islands in South East Asia dated to more than 40,000 years ago, suggesting a cultural link - and hinting at still older rock art in Australia.”

While the kangaroo image is incredibly important, it isn’t the oldest rock painting in the world as that title belongs to a 45,000-year-old painting of a wild pig that was discovered in Indonesia.

The researchers are now planning to date more wasp nests and analyze additional rock paintings to hopefully confirm when each art period started and finished. Pictures of the kangaroo painting and the rock shelter can be seen here.

The study was published in the journal Nature Human Behaviour where it can be read in full.