Cloning Endangered Species — It’s a Reality, But Is It Right?

Remember Dolly the sheep? On July 5, 1996, Dolly became the first mammal ever born via cloning – it was created using a mammary cell from sheep and the DNA from another, and carried to term by a third. Twenty-five years later, more mammals have been successfully cloned – including monkeys, pigs, cattle, wolves, dogs, cats and others. And humans? Ethics aside, while no one has publicly admitted to it, the possibility is there. However, the most interest recently has been in using cloning to de-extinct extinct mammals whose DNA can be obtained from frozen or preserved carcasses and carried by a similar species. Wooly mammoths and Tasmanian tigers seem to be likely candidates for this, but it hasn’t happened yet. However, the next best thing has. A black-footed ferret – a mammal on the brink of extinction -- has been successfully cloned. Is this good or bad news? Is cloning a better solution to preventing extinction than changing the environment to allow the species to repopulate itself? Will this be the ethical debate that finally produces a human clone? 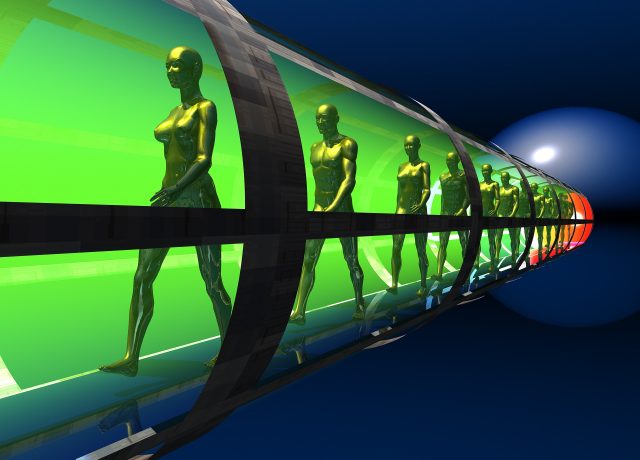 “In November, ViaGen used the 32-year-old Willa cell line to develop cloned embryos. These were implanted into a domestic surrogate mother. Mid gestation, when the pregnancy was deemed safe, the mother was transferred to the National Black-footed Ferret Conservation Center. On December 10th, “Elizabeth Ann” became the first successfully cloned Black-footed ferret to be born. She is also the first endangered species native to the US to be cloned.”

This week, Revive & Restore – a “wildlife conservation organization promoting the incorporation of biotechnologies into standard conservation practice” – announced the birth of the first cloned black-footed ferret and the successful growth and development of “Elizabeth Ann.” She is the clone of a ferret named Willa who died in 1988 and was frozen because the black-footed ferret was believed to be nearly extinct – wiped out by the poisoning of prairie dogs, their primary source of food. That changed in 1981 when a dog brought a recently-killed specimen to its owner in Wyoming. The surviving group was found, but it nearly became extinct because of canine distemper and sylvatic plague, so the Fish and Wildlife Service captured the remaining 18 ferrets. Unfortunately, they lacked the genetic diversity to save the species.

Enter the late, frozen Willa and Revive & Restore, which sequenced the black-footed ferret genome in 2013. In 2018, Revive & Restore partnered with the commercial cloning company ViaGen Pets & Equine and obtained permission to clone Willa. Using basically the same process that created Dolly, they created embryos, implanted them into a tame domestic ferret surrogate (not a black-footed ferret) and welcomed Elizabeth Ann on 12/10/20. (Pictures here.) While Elizabeth Ann is of a different lineage than the remaining colony, the researchers will not introduce her into the surviving colony, fearing what that might cause, and will instead develop a new line. There are no plans to reintroduce Elizabeth Ann or any future clones back into the wild … yet.

Is this the right solution to saving species from extinction or bringing them back from it? One of the researchers says his goal is to bring back the passenger pigeon – birds are more difficult to clone than mammals. While this is the first cloning of an endangered species in the U.S., it has been done before in other countries (mouflon sheep, gaur, banteng, Pyrenean ibex, wild coyotes) but none have survived to adulthood. Revive & Restore co-founder and executive director Ryan Phelan told AP that they see it as a tool, not a sole solution to preventing extinction or propagating de-extinction.

“How can we actually apply some of those advances in science for conservation? Because conservation needs more tools in the toolbox. That’s our whole motivation. Cloning is just one of the tools.”

If you’re not ready for cloning, will you support the alternatives?