Creatures That May Have Lived Longer Than We Thought: The Mammoth, Part 1

The mammoth: a majestic creature that roamed the lonely wilds of North America, the vast expanses of Western Europe, and the harsh lands of northern Russia during the Pleistocene era, and which is generally accepted as having become extinct somewhere around the end of the last Ice Age. Today, all we have left of this huge, mighty beast are a number of well-preserved carcasses found embedded in icy tombs, and the various bone and tusk fragments that still continue to surface from time to time. Is it possible, though, that the mammoth lived longer than anyone could ever guess? Well, maybe.  For example, the related dwarf mammoth of Wrangel Island – located in the Arctic Ocean and situated between the Chukchi Sea and the East Siberian Sea - is known to have lived until approximately 1700 to 1500 BC, which is itself startling and highly illuminating.

For years, intriguing and sensational rumors have surfaced to the effect that in some of the more remote parts of our planet the mammoth might have existed until very relatively times, blissfully unaware of what such a shocking and jaw-dropping revelation would have meant to the world’s zoological community of the 19th century, and possibly even into the 20th. And while such a scenario is certainly controversial, and one that is completely derided by mainstream science and zoology, perhaps it is not entirely out of the question. In the late 19th Century, for example, researcher Bengt Sjorgen learned that tales were both wildly and widely circulating in remote parts of Alaska about giant, hairy tusked creatures that lived deep under cover of the huge, ancient forests. Such reports of the "hairy elephants" in question extended to equally wild parts of both Canada and Siberia. 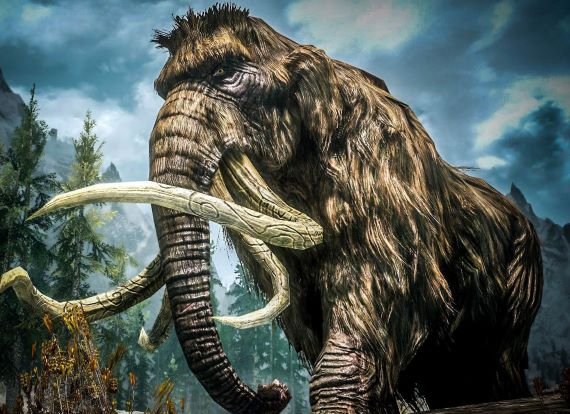 Similarly, in February 1888, the New Zealand-based Argus newspaper reported on the apparent discovery in Alaska of strange tracks that had been found by the Stick Indians in the vicinity of the White River. An Argus journalist stated: "One of the Indians said that while hunting, he came across an immense track sunk several inches in the moss and larger around than a barrel. The Indian followed up the curious trail, and at last came in full view of his game. These Indians as a class are the bravest of hunters, but the immense proportions of this new kind of game filled the hunter with fear, and he took to swift and immediate flight. He described it as being larger than the post trader’s store, with great shining, yellowish tusks, and a mouth large enough to swallow him at a single gulp."

Then, during October 1899, the story of one Henry Tukeman surfaced – a man who claimed to have killed a mammoth that was subsequently donated to the Smithsonian Institute, Washington, D.C. The tale was denounced as nothing more than a sensationalized hoax (which it probably was); however, some researchers still cling on to the belief that it just might have a grain of truth to it, and that the hoax angle was possibly introduced to try and lay the controversy firmly to rest. And also in the late 1800s, several reports of "large, shaggy beasts" were given to Russian authorities by Siberian tribesman, but no proof was ever forthcoming – some, of course, might say inevitably and conveniently. Moving on, Lindsay Selby says: "A Russian hunter claimed to have seen a pair of mammoths in 1918. This story was recorded by M. L. Gallon, the man in charge of the French Consulate in Vladivostok during the year 1920. Gallon claimed that the hunter did not understand what he meant when he referred to the beast as a mammoth, but the hunter simply maintained that it was similar to pictures of elephants he had seen. Although Gallon shared the story with friends when he returned to France later that year, he was not persuaded to publish the account until 1946."

A further sighting allegedly occurred during the Second World War when a Soviet Air Force pilot reported seeing a small herd of such creatures while he was flying over the frozen wastelands of Siberia. And although this particular report is highly intriguing – in the sense that it suggests the mammoth may have been a resident of this planet up until extremely recent times – it frustrates researchers by virtue of the fact that trying to chase the story to its original source has not yet proven successful. In light of all the above, I give at least some credence to the possibility that mammoths lived far longer than we could ever have considered. As for that Second World War report, well, it certainly stretches credibility, but who knows? Could they have been the very last mammoths? Just maybe, that's exactly what they were. I like to think so.