Creatures That May Have Lived Longer Than We Thought: The Mammoth, Part 2

Part 1 of this article was on the subject of mammoths that may have lived longer than most people could ever have considered. Today's article follows up on these stories, but with one difference: today's is an extremely controversial tale, one that is almost unbelievable. But, I'll share it with you, just to demonstrate how we have to be very careful when it comes to the matter of buying into all of these stories of relatively modern day mammoths. In 1873, the Zoologist published a sensational article titled "The Mammoth Still in the Land of the Living." Written by one Edward Newman, it stated: "The New York World describes an interview between one of its correspondents and Cheriton Batchmatchnik, a Russian convict, lately pardoned by the government in consideration of his wonderful discoveries in Siberia, to which territory he had been banished for smuggling. Cheriton had escaped from the mines of Nartchinsk, and having reached the mountains struck southward for the Amoor River, intending to get to China. Meeting Cossacks he again turned north, and essayed what seemed to be a pass in the great Altai range."

Newman continued that: "For thirty days he scrambled about seeking in vain for an outlet. At length he got out to the north, together with one of the branches of the Lena River. He then turned eastward and was entering the gorges of the Aldan Mountains when winter overtook him." It was then, Newman said, that something truly startling occurred: "Across the snow, came vast troops of animals, all going the same way. Cheriton followed them, arriving at the summit of the range, and there, far below his feet, landlocked between great ranges of hills on all sides, lay a valley fifty miles wide by one hundred and fifty long, and centered by a blue lake. He descended and found the valley warm and fertile, and full of animals. At night he made a fire and lay down beside it to sleep. During the night dark shadowy forms came over the water, splashing towards him, and seemed to seek what his fire might mean. The trampling of great beasts that crushed the willow-stalks like pipe-stems, on their way to the water's edge and that came and stood over him, breathing heavily and slow as they seemed to gaze at the fire with stupid wonder, made him afraid each moment of being overrun.”

The controversial story added: “Wild eyes, reflecting the fire-light, shone around him out of the gloom upon all sides, and wilder cries and howls gave new horrors to his position. He sprang to his feet almost paralyzed with fright, and fired off his pistol at the nearest intruder. The echo of the shot ran long around him, and it seemed the signal for the cries of a thousand new monsters to burst forth. There were mad, plunging rushes of frightened beasts around him that made the ground tremble; a peculiar long, shrill, quavering shriek sounded over the lake, and was answered by a harsh, full-guttural bellow near at hand. When Cheriton awoke it was broad day, and there were no traces of the animals that had disturbed him over night, except the paths they had worn going down to the water." 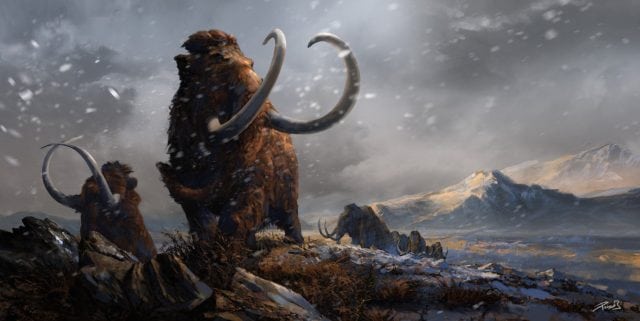 The adventure had barely begun, however, as Newman noted: "In these paths he saw the deep-planed spoor of some animal larger than anything of the sort he had ever before beheld. His first care was to seek some place to pass the next night, where he could be free from the alarms that had made the past night so terrible. He re-crossed the meadow, and followed the edge of the slope around in the direction of which he saw some rocks. Among them he found the wide and lofty entrance to a cave. He entered with some precautions, for the rocky pavement was worn as if by use, and within he heard a slow, measured movement as of an animal gently ruminating, and heavy breathing with great calm inspirations and expirations like the sigh of a smith's bellows." Then, suddenly: "One turn, then another, he heard a heavy startling snort, and there in the half light of the cave, standing alive, chewing the cud, and waving its proboscis to and fro, with a slow, majestic, gentle motion, he saw - a mammoth!"

Cheriton himself was reported as stating: "I did not know then what I have since been told, that Siberia was an old habitat of these animals, and that some of the best scientific judges are uncertain whether to look upon the remains found on the shores of the Arctic Ocean as fossil animals or as the remnants of wandering herds caught and perishing in storms, individuals of which may still exist under favorable circumstances. Without intending it I have solved that doubt."

Continuing his own account of what reportedly took place, Newman reported that: "Cheriton describes the mammoth as being a very imposing looking animal, covered with reddish brown wool and long black hair. During his stay in the valley he was close to five of them, all of which were nearly of a size, being about twelve feet high, and eighteen feet long, with tusks projecting about four feet, and being eight to ten feet counting the curve. The skin, which was bare on the upper surface of the ears, on the knees, and rump, was of a mouse-color, and seemed very thick. The animal was nocturnal in its habits, frequenting caves or forest depths by day, and feeding at night or early morning. Cheriton thinks there might be some fifteen or twenty of these monsters in the valley altogether, but that all these are aged, and that very few are born now-a-days. At any rate he saw none that had the least appearance of being young. They were very peaceable animals, torpid and sluggish as old oxen, never disturbing Cheriton, nor indeed taking much notice of him.”

Things then got, frankly, somewhat unbelievable when, allegedly, yet another monstrous beast surfaced on the scene – this one being a classic lake-monster that supposedly rose from the depths of the aforementioned blue lake and engaged one of the mammoths in battle! Newman described the suspicious-sounding mammoth vs. leviathan saga thus: "The lake was inhabited by a monster of which Cheriton was in constant dread, a sort of saurophidian, which he described as being thirty feet long, and armed with scales and horrible fangs. This monster - he never saw but the one - was master of the lake, and lived by devouring the animals which came by night to its brink to drink. Cheriton gives a graphic and exciting description of a contest which he witnessed one morning at early dawn between this crocodile-serpent and one of the mastodons. The battle which lasted more than an hour, ended in the discomfiture of the mammoth, which could barely limp away after having been constricted in the serpent's folds.”

Newman noted that a month after the story first surfaced there was still no “official contradiction” of it and its extraordinary contents. Rather, Newman added, Cheriton’s account had received positive commentary from a Professor Feuchtwanger before the American Association for the Advancement of Science. According to the professor: "The discovery of the mammoths in Siberia in the deep gorges of the mountains near the Lena Viner, which was lately published having been made by a scientific Russian convict, who had seen five living animals, twelve feet in height and eighteen feet in length, with projecting tusks four feet long, excites some discussion in Europe.

"I think it worthy of inquiry whether the mammoth of the post-tertiary period, discovering during this century in Siberia, near the same river, can have any relation to the convict's discovery. Thousands of these animals have been found buried in the ice, with their well preserved skins, and thousand of tusks are brought to England this day for the use of the turner. These are of nearly the same dimensions as those seen by the Russian. The convict has received an unconditional pardon, on the recommendation of scientific men who have investigated his statements and believe them to be true." Not everyone is quite so sure that the story has merit, however.

Fortean researcher and writer Chad Arment says: "Occasionally, in discussions of the possibility of living mammoths, there will be mention of a sighting in Siberia that was published in 1873. The story itself was written for the New York World, recognized even then as a source for a number of tall tales and newspaper yarns." In support of this statement, Arment cited the following from the August 23, 1873 edition of Cincinnati's Daily Gazette: "The New York World is fond of remarkable sensations, especially those of an apparently scientific nature. Not long ago, it told, on the pretended authority of a Russian fugitive from Siberia, of the discovery of mammoths and other extinct animals among the Siberian Mountains. It once described the transference of one man's brains to another's skull so that the reconstituted individual walked about in his own flesh but with a new mentality. Its wonderful interviews with Bismarck and Eugenie, which were too good or too bad to be true, will be remembered by our readers.

"Its latest attempt is a report of the discovery of the famous library said to have been carried by Tamerlane to Samarcand. The account goes on to describe some of the literary treasures of antiquity included in the collection. An air of truthfulness is given to the story from the fact the Russians have laid open the surrounding Asiatic districts, hitherto almost sealed to Europeans. It happens, however, that Arminius Vambery, the enterprising traveler who visited Samarcand in the disguise of a dervish a few years ago, made particular inquiries, but could hear nothing of it. If it had been in existence, the Russian commanders would, months since, have made the fact known to the world. The World’s fiction is so pleasant that we could wish it were fact."

Of course, the undeniable fact that Newman’s story – culled as it was from the pages of the New York World – is still told today, demonstrates one of the premier problems that besets much of Fortean research: namely, that while it contains enough nuggets of data to deem it worthy of study, the insertion of a Jurassic Park-like monster that does battle with a mighty mammoth inevitably results in the rolling of eyes and hoots of derision. And rightly so! Just like Ray Santilli’s notorious "Alien Autopsy" film; the 1967 footage of Roger Patterson said to show nothing less than an honest-to-goodness Bigfoot; and the tales of George Adamski, the strange saga of Cheriton Batchmatchnik continues to provoke keen debate. The believers continue to believe and, as for the disbelievers, well, they continue to disbelieve! Thus it has always been within Forteana, and doubtless it always will be. As for me, I say it's a very tall-tale concocted out of a fertile imagination and nothing else.