From Crop Circles to Time Travel: A Strange Connection

Crop Circles: they are one of the most fascinating phenomena of latter-day times. The theories for who or what is responsible for them include aliens, beings from other dimensions, the Earth itself – warning us of our reckless, dangerous ways – and military experiments. And, there is the matter of time travelers, too. If you look carefully at the available data you’ll see that there’s no doubt about the culprits. It’s us: the human race. While some of the makers consider their work as artwork –something that allows them to commune with higher, supernatural entities – other view them as nothing but hoaxers. Others, it’s said, are time travelers leaving their messages that we need to reel in our warlike ways. Either way, it's all about people - whether of now or of times to come.

A good friend, Matthew Williams, who believes most formations are made by people (including by himself!) says: "Crop Circle makers tread a thin line. On the one hand, they want people to come to them and get experiences from the Crop Circles we make. If Crop Circles were known as a 100-per-cent, man-made hoax, then the public might turn away. So this is why authorship of most Crop Circles remains anonymous, for legal reasons and for reasons of sensitivity. However, to stem the rot of blind belief in Crop Circles and to make sure Crop Circle makers and their motives are known to those who have delved deeper, there is a dialogue between some researchers and Crop Circle makers. This is to allow the more open-minded to see the bigger picture at work." 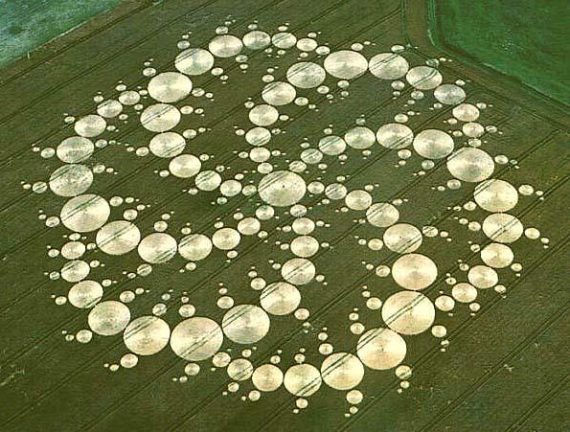 Of the various theories for who or what might be responsible for the Crop Circles, Live Science note that "molecular biologist Horace Drew [suggests] that the answer lies instead in time travel or alien life. He theorizes that the patterns could be made by human time travelers from the distant future to help them navigate our planet. Drew, working on the assumption that the designs are intended as messages, believes he has decoded crop circle symbols and that they contain messages such as ‘Believe,’ ‘There is good out there,’ ‘Beware the bearers of false gifts and their broken promises,’ and ‘We oppose deception’ (all, presumably, in English)."

The U.K.’s Sun newspaper caught Drew’s theories and told their readers: “Dr. Horace Drew, who holds a PhD in Chemistry from Caltech, says advanced alien species could be using plants to communicate peacefully with humans. Dr. Horace Drew, 61, also suggested that the mysterious phenomena are a method extra-terrestrial beings are using to try and peacefully communicate with the human race. Dr. Drew, who holds a PhD in Chemistry from the prestigious California Institute of Technology, made the claims at the UFO & Paranormal Research Society of Australia last Wednesday.

"He revealed that he had a lifelong fascination with UFOs after seeing an unidentified, silver and windowless craft hovering near his home as a 10-year-old in Florida, USA. He moved to Australia in the 1980s and has been studying crop circles for 20 years. He said that the study of the peculiar plant arrangements had led ‘to at least one major breakthrough the discovery of a more advanced binary code than our computers currently use.’ Additionally, other crop circles ‘show schematic images of the future for astronomical or human events."

Then, there is "alien investigator" Scott C. Waring, as the U.K.’s Express newspaper describe him. The Express say of Waring: "Mr. Waring has previously claimed the formations are the marks in the ground left by aliens who landed a UFO in the field. Crop circles are often found in agricultural areas in the west country of England. But, he has now expanded his far-fetched conspiracy theory to include the possibility they are messages sent back by future generations of earthlings [italics mine], and therefore proof that time travel is invented in the future. Crop circles have long been alleged to be caused by alien visitations. However, Mr. Waring is known for making statements of fact in connection with alleged UFO evidence based on his own speculation. Crop circles, which often appear in the south west of England, were exposed as elaborate hoaxes during the 1990s when many pranksters came forward to show how they made the often intricate designs using wooden planks. Despite this exposure, some alien chasers still believe they are left as signs by aliens or are even the landing marks of a UFO."

Phobos and Deimos May Have Originated From a Larger Shattered Moon