Christopher Columbus is no longer considered to be the first European to set foot in what are now the Americas, but he was at least the first Italian, right? Sorry, Chris --- you just lost that title and any statues associated with it. Archeologists in Alaska (yes, Alaska!) found blue glass beads at three different indigenous sites in northern Alaska that have been positively identified as being of European origin, most likely from the glass bead capitol of the world at the time – Venice, and their age predates Columbus’ arrival by decades. In Alaska! How did that happen?

“Made in Venice, Italy, the tiny blue beads might have travelled more than 10,000 miles in the skin pockets of aboriginal adventurers to reach Bering Strait. There, someone ferried them across the ocean to Alaska.”

As detailed in a new paper published in the journal American Antiquity, archeologists from the University of Alaska Fairbanks (UAF) Museum of the North were digging in the now unoccupied area of Punyik Point, a mile from the Continental Divide in the Brooks Range – an east-to-west range in northern Alaska. According to the UAF press release, Punyik Point was once a popular caribou hunting location and a resting site on the early trade routes. The glass beads were found there, as well as at Lake Kaiyak House and Kinyiksugvik sites, which also date to the Late Prehistoric indigenous period. (Photos here.) Unfortunately, the inorganic glass beads can’t be carbon dated. Fortunately, they were found with other artifacts, including bangles with twine wrapped around them – twine which dated to … let’s let the excited co-author Michael Kunz do the reveal:

“We almost fell over backwards. It came back saying (the plant was alive at) some time during the 1400s. It was like, Wow!”

“We conservatively date the beads at Punyik Point to the age range provided by the twine date from the bead cluster: 1397– 1488.”

“Wow!” is right! Charcoal and caribou bones found at all three sites confirmed those pre-Columbian dates. Historians put the initial creation of glass beads in Venice at around 1268 CE, which means there’s no question the beads in Alaska came form there. But how? 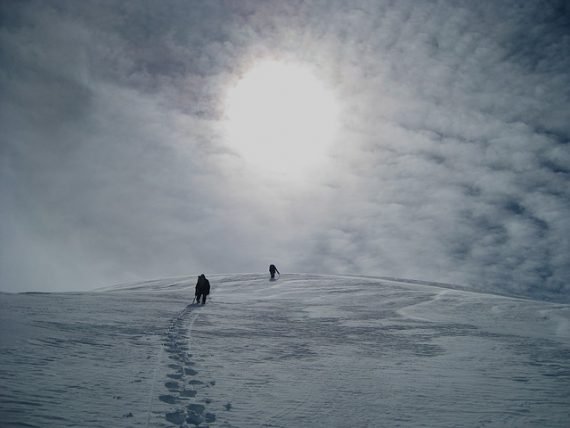 “Venetian goods moved along various maritime and overland trade routes, including the so-called Silk Road, which connected Europe and the Middle East with India and China via Central Asia. Along such eastbound routes, these early Venetian beads found their way into the aboriginal hinterlands, with some moving to the Russian Far East and, ultimately, to the Bering Strait region and into Alaska. A growing body of evidence from the Bering Strait region indicates that the movement of non-native materials from northeast Asia to northwest Alaska has been occurring via undefined routes since the first millennium AD, if not longer.”

Kunz and co-author Robin Mills think the beads arrived at an ancient trading center called Shashalik, just west of what is now Noatak in northwest Alaska. Natives traded for them and carried them east to Punyik Point, where they speculate someone strung the blue glass beads into a necklace, which was eventually lost or left behind at the underground house where they were found.

So … who gets the statue and the federal holiday?

The Creepy World of Sophia the Robot