More on the Matter of the Creepy Slenderman

A few days ago I wrote an article here at Mysterious Universe on the matter of the Slenderman. It was titled "The Slenderman: More Than Just an Internet Creation." It began: "Imagine the scene: it’s the dead of night and you are fast asleep. Suddenly, though, things change radically and you find yourself far from asleep: you are now wide awake but unable to move. You are completely paralyzed. You try and cry out but it’s no use. Your heart pounds and your head spins chaotically. Worse still, you see hunched over in the shadows of the bedroom an eight-to-nine-foot-tall, skinny and emaciated creature. It is dressed in an old-style black suit, has a pale face that lacks eyes, a nose, ears and a mouth. As for its arms and legs, they are almost like those of a spider: long, thin and spindly. Rubbery, octopus-like tentacles protrude from its torso; they wave and flicker ominously in your direction." As much as you might like it, you've just had a face-to-face encounter with the Slenderman.

Good mate David Weatherly very generously shared with me a number of reports of Slenderman sightings he investigated. I thought I would take this a bit further and give you another such example. It's a story that came to David  from "Randall," who first encountered the Slenderman while he was in his early teenage years. As Randall and his brother played with a football, tossing it back and forth to each other, Randall caught sight of a "weird figure" lurking in the heart of the trees. It was, Randall recalled, around "seven feet tall" and had "very long arms" which swung from side to side. For a moment, Randall felt oddly "entranced," something which echoes so many other Slenderman-themed cases in which the creature has the clear ability to affect and manipulate the human mind. Notably, Randall’s brother was unable to see the thing that had so terrified Randall. For days afterwards, though, Randall "caught glimpses" of the Slenderman, always in the vicinity of the family home.

In the following year, Randall and his brother went away to summer-camp. It should have been a fun time for the brothers. Well, it was for a while, except for when the Slenderman intruded on the scene and put paid to all that fun. It was just as the sun was going down on one particular night that the nightmare of the previous year came back to haunt Randall: standing in the shadows of the trees was the Slenderman. He was back. On this occasion, however, the figure was much closer, something which ensured that Randall was able to get a better look at it. He told David: "The figure looked like a man at least seven or eight feet tall. His arms were long, they seemed too long; it wasn’t natural how far he could reach with them. He was wearing a black suit and his face was very pale. I couldn’t see any of his features enough to describe him. I ran back to the cabin as quick as I could." 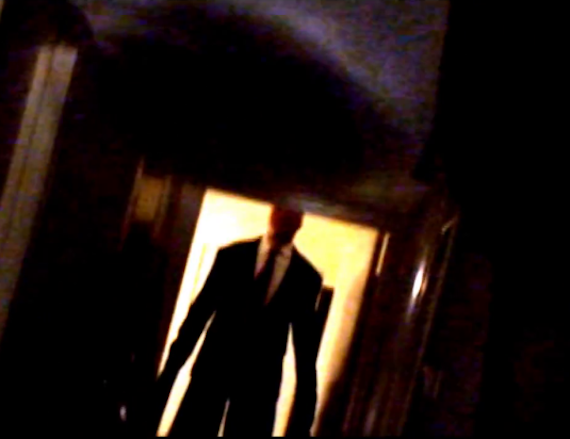 Interestingly, of the many friends that Randall made at the camp, one of them was a German boy, who, along with his family, had recently moved to the United States to live. When Randall told the boy of his experience, he suggested that what Randall saw was very similar to a German bogeyman known as "Der Schwarzer Mann," which was said to have been a "shadowy man who lurked around waiting to steal children." Notably, the German people have a long tradition of such menacing characters in their midst. They include the Popelmann, who kidnaps kids and takes them to his marshy abode in the woods; typically, they are never seen again. Very interestingly, the Popelmann is noted for his faceless face. The Busbeller is a very similar German entity that it is wise to avoid at all costs. As is the Bösermann, a dangerous figure in black who terrorizes children. At night, of course. When else?

Of his extensive research into the world of the Slenderman, David  is inclined to go down the same path as so many others who have dared to look into the matter of the controversies surrounding the Slenderman (including me). He says: "It may be that the collective consciousness of numerous people, spread far and wide, have co-created something quite disturbing. A modern tulpa feeding off the fear and dread created in the stories and legends being written about him."

The Bizarre Case of the Sleepwalking Killer