If you’re two of the biggest names in the Hebrew Bible, you probably dressed the part in royal purple clothing as described in the bible. Archeologists digging in the Arabah desert south of the Dead Sea basin between Israel and Jordan have uncovered fragments of textiles stained purple and dating to around 1000 BCE – putting them in the time of kings David and Solomon. Are these threads from their actual royal robes? If so, they would add another piece to the evidence supporting the historical existence of these major biblical figures.

“The samples originated from excavations at the extensive Iron Age copper smelting site of “Slaves’ Hill”, which is tightly dated by radiocarbon to the late 11th–early 10th centuries BCE. While evidence for the important role of purple dyes in the ancient Mediterranean goes back to the Middle Bronze Age (early 2nd millennium BCE), finds of dyed textiles are extremely rare, and those from Timna are the oldest currently known in the Southern Levant.”

In the journal PLOS One and a press release announcing the find by the Central Timna Valley Project, Dr. Naama Sukenik, curator of organic finds at the Israel Antiquities Authority, explains the excitement behind the discovery of remnants of woven fabric, a tassel and fibers of wool dyed with royal purple. The rare purple color comes from the body of three species of mollusks (Banded Dye-Murex (Hexaplex trunculus), Spiny Dye-Murex (Bolinus brandaris) and Red-Mouthed Rock-Shell (Stramonita haemastoma)) found only in the Mediterranean over 300 km (186 miles) from Timna. That, plus the fact that the brilliant shade doesn’t fade (even after 3,000 years), made it extremely rare and prized by royals … so rare that its existence was only written about – the only evidence of the dye was in mollusk-shell waste and potsherds stained with the color.

Prof. Erez Ben-Yosef, co-author from the Jacob M. Alkow Department of Archaeology and Ancient Near Eastern Cultures at Tel Aviv University, explains why the discovery is not only linked to David and Solomon, David's son and successor, via the timeframe, but also how it solidifies David’s historical existence without the discovery of his palace.

“Of course, this whole debate has repercussions for our understanding of Jerusalem in the same period. We know that the Tribes of Israel were originally nomadic and that the process of settlement was gradual and prolonged. Archaeologists are looking for King David's palace. However, David may not have expressed his wealth in splendid buildings, but with objects more suited to a nomadic heritage such as textiles and artifacts." 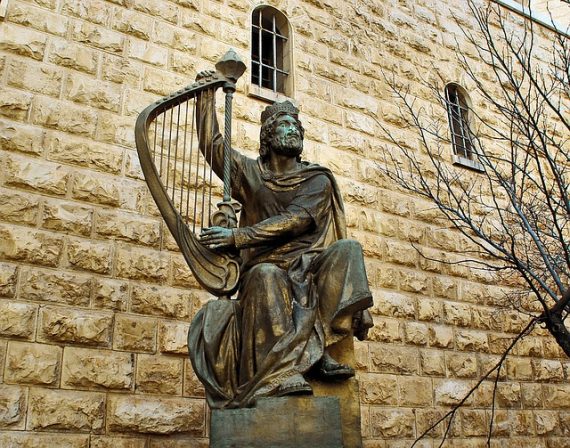 The digs at Timna, which Ben-Yosef links to the biblical Kingdom of Edom, have yielded other evidence that the nomadic cultures had had kings ruling over complex societies, forming alliances, conducting trade and waging war without any palaces or fortresses. The copper smelted there gave the leaders a valuable commodity for both power and trade, and that was probably what they used to pay for the royal purple dyes.

That may not be the David of the biblical stories or Michelangelo’s imagination, but the 3,000-year-old purple threads may add one more thread to the rich tapestry that is the real history of the Hebrew Bible.

Spinach Can Send Emails (Or Can It?)