Well, that didn’t take long. NASA’s Perseverance rover has been on Mars for about a week and its panoramic camera is already picking up strange, unidentified objects among its surroundings in the Jezero Crater. While some may have logical explanations, that hasn’t stopped folks from seeing flying saucer parts, skulls and other odd pareidolia-generated objects … or are they?

This first photo, as is the case with many photos taken by various rovers and satellites, lacks anything identifiable that could lend perspective and size to the image. That frees the imagination to, as some commenters suggest, see these objects as ants, perhaps giant alien ants. After all, that does seem to be a hill in the background. However, most agree that these are just rocks – although it seems a bit sacrilegious to refer to Martian rocks as “just rocks.”

The next photo needs less imagination but more pareidolia-tion (new word coined just for you, Perseverance). With just a little magnification, this odd-shaped object has most observers thinking “skull.” Human? Who knows, although the wide-open mouth looks alien or at least Edvard Munch-ish. (Can Perseverance zoom in to see if there’s a Screamish “Could only have been painted by a madman!" message nearby?) Or is this a miniature recreation of the famous “Face on Mars” which dates back to the Viking missions and has lost its luster -- not to mention eyes, nose and mouth -- as better satellites zoomed in on this Martian hill?

The best and most fun image from this first batch has to be the shiny objects on a hill. Once it was determined that they’re not debris from the rest of the mission – both the sky crane and the part with the heat shield crashed much farther away – the pareidoliacs (another new word – thanks, Perseverance!) decided this is definitely pieces of a metallic spacecraft, either belonging to aliens or long-ago (or perhaps secret) human missions to the Red Planet. As this video shows (watch it here), zooming doesn’t help (anyone working from home and attending virtual meetings could tell you that). 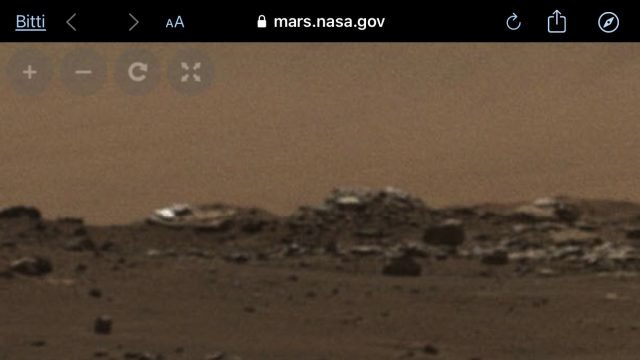 The good news is that the objects have not yet been identified so they’re still open for pareidoliussions and pareidoliarguments (OK, those might be a bit a stretch, Perseverance). The better news is that more are coming as Perseverance flexes its wheels and later launches its helicopter. That could be Perseverance’s greatest gift to homebound pareidoliacs tired of seeing pictures of famous people in their burnt toast (get a new toaster already!).

The Strange Case of the Amnesiac Killer