While Tyler Karanasios was at the Pine Hill Cemetery in Hollis, New Hampshire, he snapped several pictures and caught what appeared to be an apparition in one of them which he ended up posting online on the u Local New Hampshire Facebook page.

The cemetery does have a reputation for being paranormally active and is considered to be one of the state’s most haunted locations. There are many stories of paranormal activity occurring at the cemetery and one of them includes the Blood family who have a large plot there (which is why the graveyard has been nicknamed “Blood Cemetery”).

It was believed that the Blood family was murdered in 1867 and the spirit of Abel Blood is rumored to haunt the cemetery. In fact, the finger on his headstone that points upwards has been said to occasionally point towards the ground especially at night. Those who have seen his ghost claim that he is just lost and either attempting to get back to his house or trying to find his wife Betsy. (Several pictures of the cemetery and the Blood family plot can be seen here.)

Another frightening story involves a young boy who is said to haunt the road next to the cemetery. Back in the 1800s, the boy and the rest of his family were all believed to have been murdered in their house that resided near Pine Hill Road and the cemetery where they were buried. Locals who have driven along the road claimed to have seen the young boy flagging cars down, but when the vehicles stop to assist the child, he completely disappears. 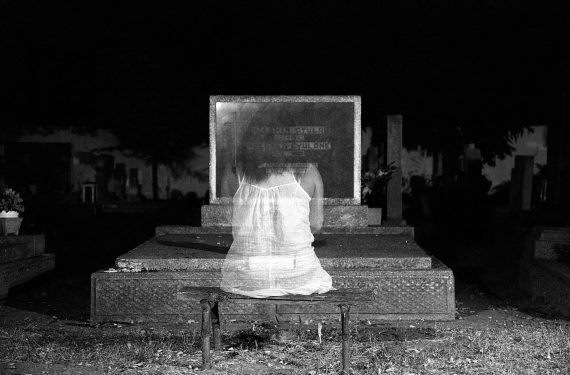 Additional paranormal activity that has been reported at the cemetery include visitors hearing unexplained tapping noises, seeing strange orbs of light, and feeling sudden cold spots even on hot days. Some have even claimed that their cameras stopped working while at the location but after they leave, they work fine. Others have noted that their car radios and gas gauges acted up while driving by the graveyard. Not to mention the large number of other ghostly apparitions that people have claimed to have witnessed while visiting the cemetery.

With all of that paranormal activity, perhaps Tyler really did capture a ghostly apparition in his photograph. You can decide for yourself as his picture can be seen here.