While psychic Bethany McPherson was visiting Lennox Castle near Glasgow, Scotland, she smelled “rotting meat” and even had an object thrown at her. But perhaps the most frightening part was when she captured a “ghost girl” in one of her photographs.

Interestingly, when she visited the castle during the day, she didn’t experience anything strange, but when she returned at night, that’s when the atmosphere got a lot spookier.

In an interview with The Record, she explained what happened, “It was dark and I immediately felt uncomfortable. I just had this horrible sick feeling in my stomach.” “I had been taking pictures in what I think was a cellar where I could really smell burning.” Bethany and her ex thought that there may have been a fire somewhere but they couldn’t find anything.

“We went into a bit which was a tunnel,” Bethany recalled, adding, “I think it may even have previously been the morgue, as there were holes in the walls, but I just remember smelling this disgusting smell like rotting meat.” At that point, she felt as if she had to leave the area and as she was walking away, she heard an object hitting a piece of metal which she believed was a warning to get out.

She went on to say that when she looked back at her photos, that’s when she noticed an apparition in one of the windows. Additionally, she didn’t know about the dark history of the castle prior to visiting the location.

And what a dark history it has. Built back in the 1830s, Lennox Castle was later turned into a psychiatric hospital in the 1930s. It started off with a good reputation. It was large and could accommodate 1,200 patients with huge dining halls and the Assembly Hall where several recreational activities took place. 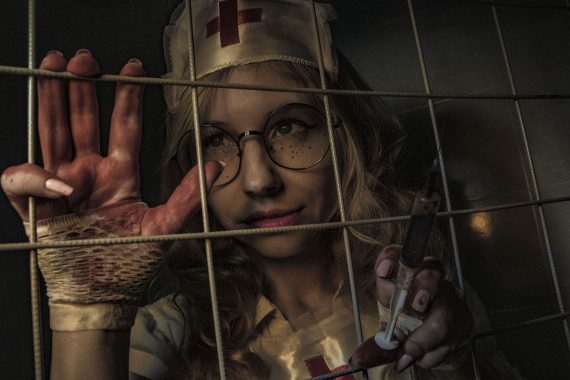 Unfortunately, things turned really bad when the hospital became overcrowded, understaffed, and underfunded. Some patients ended up having to take care of themselves. The hospital conditions were described as “wretched and dehumanizing” with one doctor saying that he was “sick to the stomach about the plight of these poor people” and that he had never worked in “a worse pit”.

Approximately a quarter of the patients were malnourished and underweight. Furthermore, there were reports of harsh punishments such as being hit with a baseball bat or having to run around the castle barefoot. The lack of care reportedly caused several of the patients’ deaths. The Lennox Castle Hospital was shut down for good in 2002.

While Bethany hasn’t been back to the castle since her experience, she does plan on returning in the near future with ghost hunting equipment. With such a dark and disturbing history, there very well could be restless spirits still wandering around. The photo of the alleged ghost can be seen here.