“Sheep Headed Cannibals from Ecuador”: The Strange Tale of the Muse Brothers

Back in the 19th and early 20th centuries, one of the most popular forms of entertainment was the circus, and indeed between 1840 to 1940, it was the dominant form of entertainment in the United States. Various travelling circuses crisscrossed the United States at the time, and for the people who lived in rural areas where not much happened it was a major, joyous event when the circus came to town. Among all of the attractions on offer, one of the most popular back in the era was that of the "freak show." Circuses would keep a menagerie of various deformed people, those with unique disabilities, or otherwise abnormal individuals, and exhibit them for a price, and the list of such “freaks” is long. Here would be shown tall men, short men, bearded ladies, conjoined twins, people with no limbs, “wolf-men” with hair all over their bodies, alligator people, “missing links,” lobster people with fused fingers, and many, many others. While it all might seem horrific to those living in modern times, this was all par for the course back then, and most of these freaks had no complaints about their existence, indeed often making more money than they would have otherwise, and some even enjoying the spotlight and minor fame they achieved. Yet not all of these circus freaks had a choice in the matter, and here we get into dark territory and begin our story of two kidnapped brothers who would be exploited and known as Eko and Iko, the sheep-headed cannibals.

George and William Muse were the sons of a tobacco sharecropper and grew up in the dusty, rural area of Truevine, in Franklin County, Virginia, near Roanoke. At the time they were being raised by their poor, single mother Harriet, and had a hard life. The grandsons of former slaves, they were of black African descent yet were albinos, with their blue eyes and shocking white hair drawing stares wherever they went, and in the rural South this was an incredible rarity. It was so remarkable, in fact, that word of the Muse brothers got to a promoter by the name of James Shelton of the Ringling Brothers circus, who was often known as a “freak hunter.” Shelton told PT Barnum about his find, who determined to get them in his act no matter what. When the Ringling Brothers Circus came to Roanoke in 1914, the Muse brothers were just 6 and 9 years old, and one day after all of the circus tents had been set up the boys were coming back from working the fields when they were approached by one of the circus promoters. 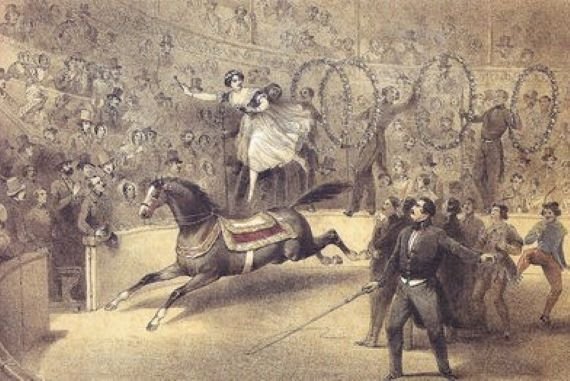 It is unclear exactly what happened next, but the promoter somehow lured the boys away off to the circus, and before long they found themselves being displayed for the amusement of the crowds. In the meantime, as far as their mother was concerned, her two boys had vanished without a trace. The circus promoters told the boys that their mother had allowed them to do what they were doing and that they would go home soon, but this never happened. In fact, the circus’ plan was to never allow them to go home again. When they started crying to go home, they were told that their mother had died, and that the circus was their new home. It was sadly a fact that they began to accept.

In the meantime, they were told to grow their white hair out into wild dreadlocks, which were a curiosity in rural America at the time, and they were billed as Eko and Iko, the sheep headed cannibals from Ecuador, later occasionally called “Barnum’s Original Monkey Men” or “ambassadors from Mars,” with the back story that they had been captured after their spaceship had crashed in the Mojave Desert. This sort of sensationalized mislabeling and marketing was very common at the time in such freak shows, such as two dwarf brothers from Ohio who were in the same circus, kept in a cage, fed raw meat, and billed as the “Wild Men of Borneo.” In their shows, the Muse brothers would be announced as a sort of missing link, cavemen, or jungle savages, but would occasionally be dressed in elegant clothes and hats from which their massive dreadlocks would protrude and play popular music. No matter how they were presented, it was always much to the delight of audiences, who paid top dollar to have their photos taken with them and showed up in droves.

Throughout all of this the brothers were fed and clothed, but never paid, and were not allowed to go to school or get any type of education. It was mostly the equivalent of modern day slavery, but because the boys were so young, uneducated, and had been so brainwashed, they didn’t know any better. As far as they were concerned, this place was the only home they knew, and since they believed their mother to be dead they knew there was nothing to go back to. As all of this was going on, their mother, Harriett, was desperately trying to figure out what had happened to her boys and get them back, but this was no easy feat for a poor, single black woman in Virginia in that day and age. This was an era of heavy racism, where the lynching of African Americans was not uncommon and law enforcement was indifferent to their plights at best. Treated as more or less subhuman, it was a time when there was much segregation, with blacks often told where they could live, where they were allowed to go, and what they were allowed to do. Harriet had no help from the police, and her own efforts to find them were fruitless. Destitute and forlorn, Harriet moved to the more urbanized Roanoke in order to find work as a maid, but she still had not given up hope that her sons were still out there somewhere.

In 1927, The Ringling Brothers Circus came through Roanoke once again, and by this time the Muse Brothers had been constantly on the road as various iterations of their stage names Eko and Iko for 13 years. By this time they were so brainwashed into thinking that the circus was their true home and that Shelton was their new father, that they barely registered it when they saw an old childhood neighbor of theirs by the name of Leslie Craft Crawford. Harriet also managed to go to the circus this time, which she would later claim was because a dream had told her her sons were there, and it was there where she saw a prominent banner showing Eko and Iko and asking their potential audience “Are they ambassadors from Mars?” She recognized them as her sons, despite all of the years that had passed, and with hope she hadn’t had in years in hear heart Harriet then entered the show and took a place in the audience.

As soon as the brothers stepped on stage, Harriet was astounded. These really were her sons, there and alive after all of that time. She then excitedly pushed her way up to the front and that was where George would notice her and say to his brother, “There’s our dear old mother. Look, Willie, she is not dead.” At this point the brothers stopped playing their music and a silence fell over the tent, before the brothers jumped off the stage to embrace their mother for the first time in 13 years, much to the shock of spectators. However, the reunion was promptly ruined by the slimy promoter Shelton, who did not know Harriet and demanded to know what she was doing. When she explained what was going on, Shelton allegedly told her that he was in fact their real father, and quickly had his lawyers and the police step in, which did not bode well as Harriet was a black woman in the south and she knew how this was going to go.

Unbelievably, Harriet was able to convince authorities that these were her long lost sons, and what’s more, the Circus would agree to pay back wages for their work. In a surprising turn of events, they also won a court case to gain a generous settlement, although the brothers’ deadbeat stepfather apparently made off with most of it. Fortunately, the circus offered to pay increased wages to them if they stayed on with the circus, as well as offering their older, unemployed brother a job at the circus as a “roustabout,” and so with their mother’s consent the Muse brothers rejoined the circus in 1928, traveling as far away as London and Hawaii. However, the bitter Shelton was still around, allegedly skimming off their pay, spurring years of continued legal battles to get the circus promoter to go away. The money was still better than they had ever seen before, though, allowing Harriett to buy her own farmhouse and for her family to claw their way out of the abject poverty they had long suffered.

Rather tragically, Harriet Muse would pass away in 1942, but at least she had been able to see her sons again and live a good life before she did. She had also saved up a nest egg that George and Willie inherited and with which they bought their own land and house in Roanoke. They would continue their lucrative Eko and Iko act up to 1961 before retiring from show business and living a quiet, comfortable life, wealthier than they had ever been before, although they were nearly blind by that point and had to be taken care of by their sister Annibal and her daughter, Dot. George would pass away in 1972 and Willie would live until 2001. The whole amazing tale was covered in great detail by journalist Beth Macy, in her 2016 book Truevine, due to be made into a major motion picture. It all leaves us with a fascinating tale from another time, a look at the circus life, racial inequalities, and curiosity of the unknown unique to the era. The Muse brothers certainly had a bizarre and tragic odyssey, and their story is etched into the annals of strange historical oddities.

The Wisconsin Dogman Phenomenon: How Did it All Began?