Siberian Craters Are Forming Faster and Deeper Than Ever

When they first began to mysteriously appear, the giant holes or craters in remote Siberian areas had no explanation – leaving them open to speculations ranging from bombs and rockets to giant worms and aliens to climate change and reindeer eating too much grass (really!). Eventually, the blame was definitively put on pingos – methane gas bubbles trapped under solid permafrost domes until they defrosted, collapsed and exploded – but knowing what they are and why they open up hasn’t opened up any solutions. In fact, a new report reveals that the older ones are growing while more new ones are forming every day.

“We found that 5% of the landscape changed from 1984 to 2017. The algorithm detected all seven GECs reported in the scientific literature and three new GEC-like features, and further revealed that retrogressive thaw slumps were more abundant than GECs.”

When you have a territory as big as Siberia to search, scientists are wise to turn to satellite data and modeling for help, and that’s exactly what Sue Natali, Arctic program director at Woodwell Climate Research Center in Massachusetts, and her team from Woodwell, the U.S. Forest Service and the Trofimuk Institute of Petroleum Geology and Geophysics (Novosibirsk, Russia), did. Their paper, published in the journal Geosciences, shows an alarming number of other gas emissions crater (GEC) and previously undetected landscape changes over a 327,000 sq km (126,000 sq miles) area centered around the Yamal Peninsula in western Siberia where the first craters were found in 2014 – an area that continues to be a hotbed of crater formation due to permafrost melting from climate change.

“The latest science suggests that GECs form when subterranean methane accumulates beneath ice-rich permafrost, which can over-pressurize, deform the land-surface, and explode catastrophically. This activity is associated with warmer air temperatures, so as the climate warms and temperatures rise in western Siberia, that may in turn accelerate GEC formation in the region, increasing greenhouse gas emissions and posing a risk to humans and infrastructure. Understanding these risks however, has been hindered by limited capabilities for detecting and mapping GECs.”

The press release announcing the paper details the process used by the Woodwell team. Satellite data from Google Earth (of course) showing surface reflectance, elevation, and water extent was fed through “a semi-automated multivariate change detection algorithm” to create detailed topographical and geophysical maps (see them here) of the Yamal and Gydan Peninsulas (the ground zeroes of past crater formation) and adjoining areas which immediately highlighted abrupt permafrost thaw and lake drainage – two big signs of GEC formation. 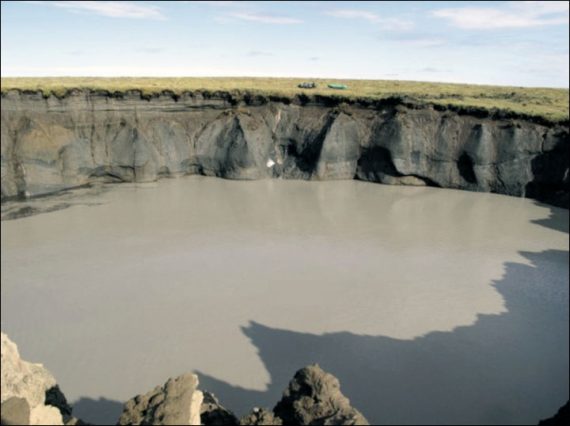 “Our change detection algorithm successfully identified the seven GECs previously reported in the scientific literature and three previously undocumented GEC-like features. Two of the newly identified features had geomorphic similarities to—and were located in an area nearby—several known GECs in the vicinity of the Bovanenkovo gas field. While less abundant than retrogressive thaw slumps in the Yamal-Gydan region, GEC activity is challenging to predict and poses a hazard to human populations and infrastructure.”

While finding three previously unknown craters was big, detecting changes that could lead to more in less remote areas with human populations and vulnerable infrastructures was even bigger. Unfortunately, while knowing ahead of time the signs of potential crater explosions is useful, it’s too late to fix the climate changes that caused them – only to fix the future before the landscape formations begin to occur.

Data is just data. It’s what you do with it that counts.

The Strange Mystery of the Cosford UFO Incident