Located amid the rugged, scenic vistas of Conception Bay, off the Avalon Peninsula of Newfoundland and Labrador, Canada, is a tiny speck of land called Bell Island. Measuring just 6 miles in length and 2.2 miles in width, it nevertheless strikes an imposing presence with its soaring cliffs on all sides and its numerous sea caves and sandstone sea stacks. It is known for its craggy, menacing façade, for the most part seeming to be almost unapproachable with its jagged rocky exterior, as well as for its rich diversity of sea birds coming here to roost. Yet for all of its wild charms and rugged, scenic beauty, the island also has its share of dark secrets, and indeed this windswept slash of rock has managed to gather about itself a reputation for being among the most haunted places in Canada.

Bell Island had long been considered to be exactly what it looked like, merely just a barren, sea thrashed lonely rock, until in 1896 it was found to be a rich source of iron ore. Before long, iron ore mines began popping up all over the island, with Bell Island supporting 6 mines in its heyday. These mines were very ambitious, spreading out into a spiderweb of tunnels beneath the ground and even under the sea, and they attracted a hodgepodge of ethnicities, from Irish, English, and Scottish to German, and Estonian, all of them mingling together and coming to work the mines. By the 1950s, Bell Island was considered to be one of the largest iron ore mining operations in the world, and incorporated towns such as Wabana were booming. This of course also attracted parasites and dregs of society, a haven for various criminals, misfits, and stowaways feeding off the underbelly of all of this success, and it was by all accounts a fairly rough place to live. It was also a place full of some intriguing tales of the supernatural.

One of the most common stories whispered amongst the locals of this place orbited the expansive wetlands and bogs of an area called Butler’s Marsh. Here there were said to roam malignant, vicious fairies that were not shy about attacking anyone who crossed into their domain. It is said that it was not uncommon for people passing the area to carry with them Bible passages to ward off the creatures or bread in order to offer to them for safe passage, and Newfoundland playwright Robert Chafe once called them “mean, twisted, sinister creatures.” These fairies were said to not only attack islanders or lure them to their doom out in the marsh, but also to abduct children and cause all manner of illness and misfortune, and pretty much anything that went wrong on the island was blamed on them. There are other supposed supernatural denizens to join the evil fairies of Bell Island. Considering the ambitious mining operations going on and the lack of any real safety precautions, many miners met their doom down in those dark, dank tunnels, and indeed many of the mines of Bell Island are said to be prowled by spectral phantom miners.

While ghostly miners and malicious fairies might seem scary enough, perhaps one of the most famous paranormal yarns of the island is that of what is often called the “Bell Island Hag.” The story here begins in the years during World war II, when the waters off Bell Island were prowled by German U-boats. On occasion, the sailors aboard these submarines would sneak onto the island in order to resupply and ferret out sympathizers. According to the tale, a young servant girl from Upper Island Cove happened across some of these German sailors on the island, who promptly took her captive and dragged her out into the marsh to kill her. Other locals had apparently heard her cries for help, but had assumed it to be a trick carried out by the fairies and so had done nothing to stop it. This was perhaps a bad move, as the suffering and horror the girl endured seems to have made sure that she stuck around after her death. Also known as “The Hag With Two Faces,” the Bell Island Hag is said to appear at first as a beautiful woman dressed in white, who blooms out from the shadows to entrance those who see her. However, as she draws closer, the woman then begins to transform, her immaculate white dress turning grey and deteriorating into tatters as she falls to all fours while a horrid, putrid stench fills the air. The hag will then take on the countenance of a wretched, “wormed-out face,” and the stench is so bad that it has been descried as being paralyzing, gluing the victim to the spot where they stand and causing them to double over and wretch. The Bell Island Hag is such a popular legend that she was immortalized with a Canada Post Halloween-themed stamp, and she continues to live on in local lore. 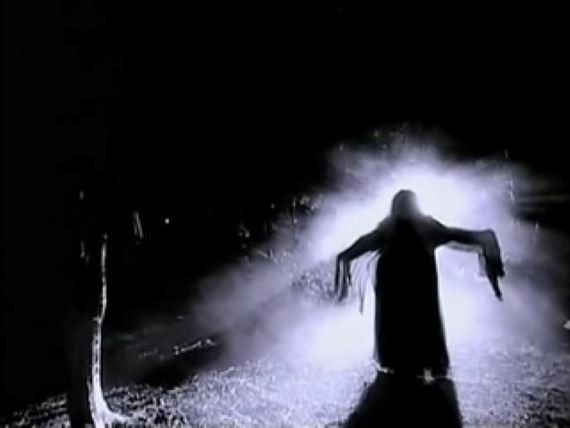 Besides all of these ghost tales, Bell Island has another unsolved mystery that occurred on Aril 2, 1978, when a loud explosion reverberated through the region to damage homes and blow out windows, as well as to leave two square craters within the ground. I have written about what has gone on to be called “The Bell Island Boom” before, and it has been speculated as being everything from a massive lightning superbolt to secret military tests, to aliens, but has never been truly solved. Whatever it was, it only adds to the mystique of this strange, isolated land.

The mines closed in 1966, and since then the population of Bell Island has dropped dramatically, but it has enjoyed a modest amount of success as a tourist attraction, with droves of visitors taking the ferry out from nearby St. John’s to enjoy both the natural splendor and the spooky tales of this island getaway. It is very interesting just how much strange phenomena this little speck of land has managed to attract to itself, and although it may all be just misunderstanding and spooky tales, it certainly is an intriguing story of a faraway place harboring deep secrets we may never comprehend.