The Haunted St. James Hotel and its Evil Room 18

Hotels are in some ways inherently creepy places to begin with. How many people have been on that bed, putting their head to that pillow, sharing the same space that you occupy now? All of these people with different lives and paths, staying in that same place, their time there overlapping in time, it is all rather spooky when you think about it. What has gone on in that room and who has passed through its walls? Who has been in there with you? Such questions become even eerier when you are staying in a room of a hotel with a traumatic past, sitting and sleeping on the very same furniture that has been there since the beginning. One place where this is prominent is a historic hotel in the state of New Mexico, which has a dark, turbulent history and is by all accounts infested with ghosts and possessed of its very own cursed room.

What is now called the St. James Hotel, in historic downtown Cimarron, New Mexico, was first built by a man named Henry Lambert in 1872. Once the personal chef to none other than president Abraham Lincoln himself, Lambert had headed out West for the same reason a lot of people were at the time; he wanted to find gold. He sadly did not strike it rich as planned, and ended up starting the hotel originally as a restaurant and saloon to service travelers passing by along the Santa Fe Trail. The place proved to be so popular that it was made into the Lambert Inn, and it would go on to be called the St. James Hotel and earn a rather nefarious reputation.

At the time, Cimarron was lawless place, a den of scum and villainy not unlike an old Western film, and many of these unsavory characters inhabited the Lambert Inn. Interestingly, the Inn was a popular hangout for both lawmen and criminals alike, and among the many names that came passing through are a veritable who’s who of the Wild West, including Wyatt Earp, Jesse James, as well as his killer Bob Ford, Buffalo Bill Cody, the outlaw Davy Crockett, Clay Allison, Black Jack Ketchum, Annie Oakley, Doc Holliday, Kit Carson, and Pat Garrett, among many others. Considering that when you get this many volatile elements in one place there is bound to be trouble, shootouts, fights, and all manner of mayhem were par for the course here, despite the place’s reputation as an elegant establishment. Things got so bad that Lambert actually had the ceiling reinforced with extra thick wood paneling in order to make sure that guests sleeping upstairs wouldn't accidentally be shot. There would be an estimated 26 murders carried out at the notorious St. James Inn during its heyday, and when it was renovated in 1901 there were found to be myriad bullet holes peppered throughout the place, with more than 400 bullet holes in the ceiling above the bar alone, a testament to its violent history.

When more and more railroads began passing through the region, the Santa Fe trail became obsolete and customers at the hotel dried up, leaving the inn to fall on hard times. Henry Lambert himself died in 1913, his wife not long after, and the hotel went on to go through periods of abandonment punctuated by a procession of different owners. For the most part, it was a hollow husk of what it had once been, and it would not be until 1985 that it was finally renovated and injected with some semblance of its former glory. Yet, no matter what they did there still remained bullet holes that can be seen to this day, and they could not completely wash away the establishment’s dark past. Indeed, it seems that this past has lingered on, in the form the many ghosts said to still be tethered here.

The St. James Hotel, which sits on the National Register of Historic Places, is already a somewhat creepy place to begin with. Rustic and kept with the same style it had back in the 1800s, the rooms in the original building have no television, phones, or radios and are furnished largely with the same pieces that were there over a century ago. It is like a place stuck in time, an insect in amber, and to walk through the doors of the St. James is akin to stepping into a time machine back to the Wild West. It is at once charming and not a little creepy, so it may be no surprise that with this frozen in time appearance, creaky floors and its bloody past it is perfectly suited to hauntings, and boy does it have them.

One famous ghostly resident is the wife of Henry Lambert, Mary Lambert, who has allegedly been seen all over the place here. She especially seems to enjoy spending her time at the dining hall and her old room, her presence often first sensed through the anomalous smell of rose perfume in the air. One witness and ghost hunter Rick Smithson, of the International Ghost Hunters Society stayed in Mary Lambert’s old room and has this to say:

Staying in the room of the late Mary Lambert was exciting. As we were fading off to sleep, I felt a light touch on my back. Although feeling quite soothing, I noticed my wife was turned away and could not have touched by back. Upon questioning if she had just touched me...she had not! A moment later she shivered as invisible fingers lightly touched her hand. About 3 AM we heard a hideous scream that seemed to originate inside our room. Upon immediate picture taking we discovered a vortex (thought by many to be the spiritual presence of a deceased person.)

There is also Lambert’s son Johnnie, who died in a fire at the tender age of 2, and who roams about the halls appearing as a little boy with blonde, curly hair and horrible, disfiguring burns on his face. He is joined by the ghosts of two 12-year-old girls who died at the hotel from diphtheria, as well as various apparitions of unidentified shadow figures dressed in period clothing, thought to be the restless spirits of dead outlaws. Another famous ghost here is that of a small little ancient old man called the “Little Imp,” who is said to be very mischievous, poking people, hurling objects, and breaking glass lampshades. These various ghosts are seen all over the St. James Inn, but there is one place that is particularly known for its intense paranormal activity, and that is the infamous Room 18. 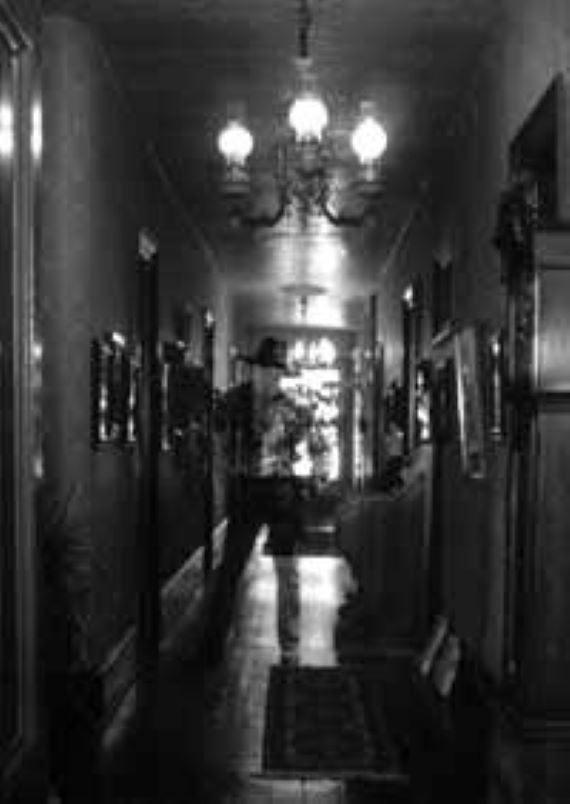 Room 18, which is interestingly enough located right next to Mary Lambert’s room, is said to have once been just a room like any other in the hotel, that is until one night in 1881. According to the lore, on this evening there was a booze-fueled poker game held at the hotel, but when the game was won by a man named James “TJ” Wright, someone took issue. Wright went back to his room, Room 18, and was shot in the back, after which he died there in the room. After that, room 18 became well-known for its especially violent and malicious paranormal activity. Guests who have actually stayed there have reported being pushed, prodded, hit, and having objects fly around, covers ripped off the bed, night terrors, sleep paralysis, and being beset with unbearable feelings of hate and negativity. Adding to the spook factor here is that there are said to have been people who went insane and killed themselves in the room. There have been so many reports of intense, malevolent paranormal phenomena from Room 18, that it was eventually closed off to guests, and to this day remains locked shut and off limits. Even so, the evil presence inside can still apparently be felt simply from standing outside the room, and one witness named Karen Hudson has said of this:

I could not shake the feeling of being watched or followed. Standing in front of room No. 18, I could feel something like getting the heebie-jeebies on the back of my neck. My husband said it felt like the hair on the back of his neck was standing on end.

The St. James Hotel has become so well-known as one of New Mexico's most haunted places that it has attracted quite a few paranormal investigators and even featured on the Discovery Channel show Ghost Adventures, who investigated the place on season 9 of their show. The crew claims to have witnessed numerous strange phenomena on the premises, including swaying chandeliers, anomalous noises including a child laughing, apparitions captured on camera, and EVP (Electronic Voice Phenomena) of someone saying "thank you", "I'm dead", and "smoke." At present, the St. James Hotel encompasses the original structure, with 13 historic rooms and no modern amenities, as well as a new annex, which has an additional 10 rooms with more modern accommodations, and guests can still enjoy the old-fashioned dining hall and salon, which have remained largely unchanged since the 1800s. Is the hotel haunted? Why not book a room and find out for yourself?

“Lady in Red” Captured on Video at Haunted Astley Castle