The Mysterious Monster of Lake Tanganyika

Lying out in Africa along the borders of Tanzania, the Democratic Republic of the Congo (DRC), Burundi, and Zambia, is the majestic Lake Tanganyika. The second oldest freshwater lake in the world, as well as the longest and second deepest, the lake is the crown jewel of the region, supporting a massive fishery that feeds much of the areas that lie along it. The lake is well known for its abundant biodiversity, supporting a mind-boggling array of endemic fish, in particular cichlids, as well as mollusks and crustaceans, reptiles, and assorted invertebrates, most of them found nowhere else in the world. However, it has also long been said to harbor a far more mysterious inhabitant, a lake monster that has been seen for centuries and which still eludes proper classification.

Since time unremembered the people of the Lake Tanganyika region have spoken of something large and fierce inhabiting the lake’s depths. The Tabwa tribe of northern Zambia called it “The Fishing God,” and would hold ceremonies before the fishing season in order to appease it for a good haul. It was described as an immense, reptilian beast, but it appears to not have been completely confined to legend, because outsiders began to report seeing something strange in the lake as well when settlers arrived. The first such reports began to trickle out in 1893, when an expedition led by a Joseph Augustus Moloney met with missionaries in the region who spoke of a great “sea serpent” prowling the murky depths, which would also occasionally be seen basking upon the shore. A spectacular account would come out in 1907 as well, this time from the English naturalist Lord Walter Rothschild, who claimed that he had heard stories of a massive, tusked beast that lurked on the southern part of the lake that was said to be quite grumpy and aggressive. Rothschild would never see the creature himself, but claimed that one of the witnesses was an officer with the South African police, and truly believed the accounts.

Reports would continue into the 1900s, largely due to the increased presence of foreigners in the region. In 1914, the German doctor M. V. Thierfelder was along the lake’s remote shores in Burundi, where he was stationed to help deal with an alarming epidemic of sleeping sickness. One day he apparently went out hunting with a local guide by the name of Ilsgensmeier, who took him around a cliff-lined bay, and that’s where they saw something the German could not explain, a gargantuan water monster he would later estimate as being over 100 feet in length. He would say of it:

Suddenly, I saw coming from the lake, in the bay itself, something that I had never seen. It was a creature that looked like a monstrous serpent. However, it did not swim like snakes in horizontal movements, but its rings—I counted as many as six—rose vertically above the water. The animal arrived in the bay at a fairly brisk pace, and went straight to the vicinity of the rocky shore, on which I was lying motionless. The beast had neither legs, nor stumps, nor fins. Near the head, however, there were slender fin-like structures on either side. The colour of the animal was a bright brown; it had no scales, but was covered with a thick fleece. The head was difficult to make out because it only appeared fleetingly above the water, but it was not wider than the body and was not separated from it by a constriction. It was not like a serpent's head, but, rather, that of a mammal, a manatee for example. The mouth, however, appeared narrow and elongated. After the giant beast had spent some time moving among the otters, it turned around and came out of the bay in majestic undulations. 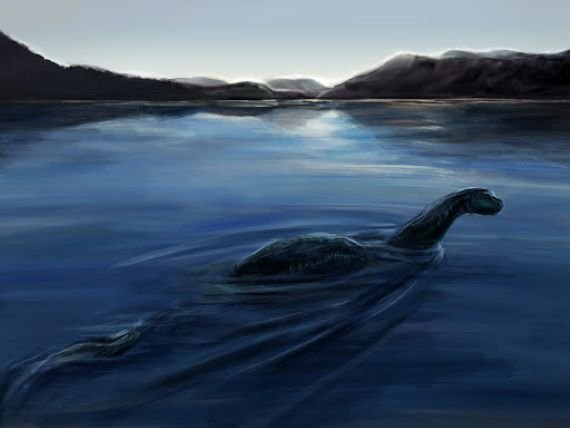 Another notable account by a foreigner happened in 1920, by the French writer and adventurer Victor Forbin. He claimed that he had gathered many reports of what he called “amphibious animals, of gigantic size, similar in various respects to the elephant, the rhinoceros and the hippopotamus.” In 1928 there were numerous reports of a reptilian water beast being seen by ships traversing the lake, and on one occasion the crew of a ship even found tracks from the creature on land, described as “two claws like those of a gigantic bird, much larger than elephant tracks, and the dragging trail of a thick tail's end.” These sightings inspired the explorer George Grey to mount an expedition to the region but he was unable to locate anything other than numerous reports of the creature from natives. Forbin’s accounts in later years have been viewed as questionable, mostly just hearsay and misidentifications, with even the great cryptozoologist Bernard Heuvelmans expressing doubt as to the veracity of his stories.

Sightings after the 20th century seem to be rare, leaving us to wonder just what it was that people were seeing and if it is still even there at all. If it ever was real, then what could it be? Was this some sort of unidentified reptile or perhaps a type of undiscovered horned pachyderm? It is hard to say because the descriptions vary so wildly, ranging from a sleek serpentine reptile to those telling of a more lumbering, massive animal more like a hippopotamus, leaving one to consider whether there may actually be more than one cryptid involved here. Whether it is based on a real creature or is just a figment of the imagination, the monster of Lake Tanganyika has managed to become an odd little regional tale, and it sure does make one wonder just what is going on here.