One of the most gruesome, sinister, and completely intriguing of phenomena connected to the phenomenon of UFOs is that of the dark world of cattle mutilations. By some accounts, for some reason, it seems that whatever is behind these strange lights in the sky also has a liking for targeting various livestock for some impromptu surgery and mutilation, often ending up with carcasses that show a variety of strange features such as almost selectively missing organs, strangely precise cuts, a lack of deterioration, and no rotting stench pervading the area. It has been an ongoing phenomenon occurring all over the United States, and one strange spate of such incidents happened only very recently in the U.S. state of Oregon.

Strange cases of cattle mutilations in the state of Oregon have been going on for some time, since back in the 1980s, when ranchers in the area began reporting cattle that had been mysteriously killed and drained completely of blood and sometimes with udders missing and displaying no scavenger activity. This all slipped under the radar at the time, but in 2019 there began a wave of such cattle killings that have left ranchers and law enforcement officials reeling and looking for answers. In the summer of 2019, a remote ranch in rural Oregon called Silvies Valley Ranch me with some rather inexplicable events. Over that summer, five young prize purebred bulls mysteriously began showing up dead all over the place. The corpses were found to be drained of blood, with the tongues and genitals removed with surgical precision, and there was no indication as to what had actually killed them. These were huge, powerful animals, yet there was no sign of a struggle and it seemed as if there were no bullet holes or dart marks. Strangely, there were found no signs of damage caused by buzzards, coyotes or other scavengers, and it was soon found that just two years before there had been a cow that had similarly showed up dead and bloodless on the nearby ranch of a Andie Davies, in New Princeton, Oregon. It was completely perplexing, as these were all strong, healthy bulls, and one livestock extension agent for Oregon State University Extension Service by the name of Scott Duggan would say of it:

I'd be a liar if I didn't say it had us all pretty stumped. Our first thought was poisonous plants. Lupine was really prevalent this spring... but killing a bull is no small feat. I believe that someone killed the bulls. Death of healthy cattle on rangelands is normally due to one of three situations. These are: 1. Naturally occurring causes such as poisonous plants and unfortunate circumstances/accidents such as drowning, lightning, etc.; 2. Predation (wolves, cougars, bears, etc.) and; 3. Humans killing for fun, rituals, food, etc. The time of year that the bulls were killed, and the locations of the animals where they died would make it highly unlikely that this was due to poisonous plants. Also, it does not appear to be predation, based on the condition of the bulls. This leaves human causes as the most likely explanation in my opinion. It's got to be some group doing some strange ritual. Human activity certainly seems possible. It is absolutely the strangest thing ever. How somebody put these bulls on the ground at what would be arguably a fairly close range — and to do it in a way that didn't leave any signs, no trace evidence, no footprints, no struggle marks from the animal, no broken limbs — I have no idea. 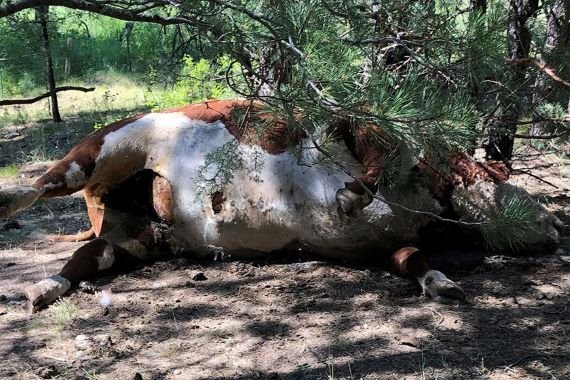 That same year, another central Oregon ranch near Hampton, Oregon, owned by a Stephen Roth, had a similar predicament, when five of his own cattle turned up dead and mutilated in the same way, all found within 1.5 miles of each other and with no tracks found around any of the carcasses. It was alarming enough that ranch hands were armed and told to travel in pairs, but as to who or what had killed these massive animals, no one knew. The Roths manage about 87,000 acres of holding around 1,000 head of cattle, but none of them had ever seen anything like this. In one case a cow was found with the heart, tongue, udder, vagina and anus being cut from it, in every case with expert, surgical precision. In none of the cases was the cause of death determined, with no signs of dart punctures, no bullets, no strangulation marks, no rope burns, no tire tracks, no signs of poison. A friend of the Roths and expert tracker, Gary Bishop, would go to the site of the killings and say of the state of the corpses:

It’s obvious an animal didn’t do it. I think whomever is responsible relies on the fact that we are so rural that they can’t get the animal to a vet for a forensic exam fast enough. When an animal is killed hunting, usually you gut it right on site so you can move it. You can see that disturbance on the ground. The person that’s doing this is getting away with this, but is very efficient at it. They’ve been doing it a long time or they are in a trade that they know how to skin an animal. To be able to cut through skin and hide without getting into the belly, takes a lot of skill and precision. It kind of creeped me out. I definitely think it was someone, a pretty sick person. It wasn’t an animal. No animal can cut skin around a belly like that. 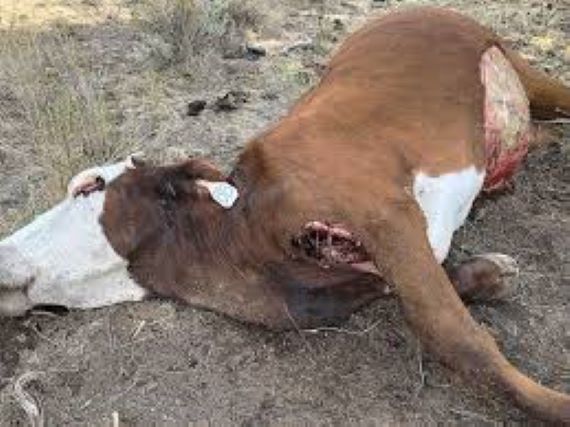 There were some other creepy details as well, such as one ranch hand allegedly getting severely ill after touching one of the carcasses, something no one else had done. The mutilations continued into 2020, when a cow was found by rancher Fee Stubblefield near Ukiah in Umatilla County, with its tongue, glands and sex organs cleanly cut off and a piece of its ear placed on its neck. At no point was there any evidence of blood at all, and the whole thing seemed to have been drained dry. None of this is good news, not only because it is creepy, but some of these cattle are worth big money. What was doing this here in Oregon and in other places? Was this people spiting the ranchers? Was it cultists or even aliens, as have been suggested? One Dan Jenkins, a deputy with the Harney County Sheriff's Office, has said of the various takes on the phenomena:

A lot of people lean toward the aliens. One caller had told us to look for basically a depression under the carcass. ‘Cause he said that the alien ships will kinda beam the cow up and do whatever they are going to do with it. Then they just drop them from a great height. Another person told us we should run like a Geiger counter type thing around the animal and guarantees that there would be radiation there. And the number one on the list there, he thinks it’s the North Vietnamese army.

It is hard to know what to make of such cases, or why they should happen in a wave in this one area. The questions we are left with are largely the same we are given with any strange cattle mutilation case. What is behind this? How could someone so decisively take down a cow or a bull and then drain its blood and surgically remove certain organs? Why would they do such a thing and who is it to begin with? Is this pranksters, aliens, or as skeptics have suggested just an anomalous combination of the natural decomposition process mixed with the work of scavengers? No one really seems to know for sure, but we do know one thing, and that is that the phenomenon of cattle mutilations has continued on to stoke the imagination and inspire debate.

Possibly Habitable Planet May Be Orbiting Alpha Centauri A